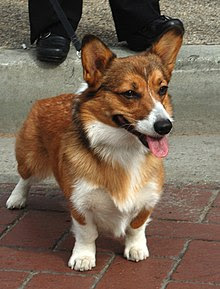 From Wikipedia, the free encyclopedia
Jump to: navigation, search
The Pembroke Welsh Corgi (

Pembroke Welsh Corgi
The Corgi is proportional to larger breeds but has shorter legs, yet has a sturdy appearance and an athletic body that helps it herd livestock such as poultry, sheep and cattle. They are short so if livestock tries to kick the dog, the hoof goes right over the dog's head. Its body is long, and it has a naturally long, bobbed, or artificially docked tail and erect ears. The corgi's head should be foxy in shape and appearance.

Pembroke Welsh Corgis are 10 to 12 inches (25 to 30 cm) tall from their feet to the top of their shoulders. The length from the shoulders to the set on of the tail is 40 percent longer than their height. Pembrokes in peak athletic condition weigh Male: 22–26.5 lbs (10–12 kg), Female: 22–24.3 lbs (10–11 kg). They reach their full height by 9 months old, but their bodies keep filling out until they reach full maturity at two years. Pembrokes have a big appetite, so they can weigh up to 40 pounds (18 kg) if allowed to overeat.[1] Pembroke Welsh Corgis (Corgwn in Welsh) can benefit from portion control and exercise. 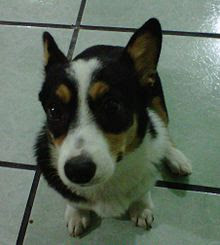 Pembroke Welsh Corgi.
Pembroke Welsh Corgis are very affectionate, love to be involved in the family, and tend to follow wherever their owners go. They have a great desire to please their owners, thus making them eager to learn and train. (They can be stubborn, however.) The dogs are easy to train and are ranked as the eleventh smartest dog in Stanley Coren's The Intelligence of Dogs. Besides herding, they also function as watchdogs due to their alertness and tendency to only bark as needed. Most Pembrokes will seek the attention of everyone they meet and behave well around children and other pets. It is important to socialize this breed with other animals, adults and children when they are very young to avoid any anti-social behavior or aggression later in life. Due to their herding instinct, they love to chase anything that moves, so it is best to keep them inside fenced areas. The herding instinct will also cause some younger Pembrokes to nip at their owner's ankles to get attention, but this behavior can be stopped through training and maturity.[1]

There are five "allowed" colours for Pembroke Welsh Corgis:

Pembroke Welsh Corgi
Pembrokes should have a "fairy saddle" marking on the side of their shoulders caused by changes in the thickness, length and direction of hair growth. The phrase "fairy saddle" arises from the legend that Pembroke Welsh Corgis were harnessed and used as steeds by fairies. The white markings can be on the feet, chest, nose, stripe on the head, and as white partly or fully around the neck. Pembroke Welsh Corgis have an undercoat of fine soft fur and an overcoat of coarse hair, which makes their coat water resistant. Their coat should be medium length with a little extra on the chest plate.
The Pembroke Welsh Corgi has a double coat with medium length hair and are fairly heavy shedders. In addition to their regular shedding, they blow their coat twice a year (in the spring and fall).

end quote from Wikipedia under the heading "Pembroke Welsh Corgis"

My daughter has one of these and the Queen of England often has about 10 or 12 of them because they are very sweet affectionate and personable and they also sometimes "Talk". But of course talking isn't like what humans do but rather  a dog expressing his or her emotion with sounds different than barking usually.

As a puppy I really hated this dog and often wanted to tie her to a tree in the forest and leave her there because my wife and daughter didn't take care of her, feed her and deal with her by walking her so I had to. And I didn't even choose this dog that looked sort of like a giant furry rat as a puppy. My half long haired German Shepard half Australian Shepard older dog looked at her and I called the name of my daughter's dog that had just died that he wasn't recovering from very well. So, I wondered if my dog believed in reincarnation so I called his old friend's name and he began to slowly take an interest in the Corgi Puppy. We kept her in the kitchen so she couldn't destroy our house until she was housebroken. However, she chewed the corner off one kitchen wall and I had to repair it with spackle after she stopped chewing it off. I also had to feed her and clean up her mess and walk her and train her even though I was against getting a puppy to raise in the first place.

But, after she got to be 2 or 3 years of age I began to appreciate her because she was very comforting as a dog. So, I began to realize she was really a great dog after all even though I never wanted a puppy in the first place. So, even though it took me about 2 or 3 years she is really a great dog after all. They are a dwarf breed where they took a big dog and bred them down. So, even though they are relatively small they have a big dog personality which is really interesting if you haven't seen that before. So, she gets along with my older male dog   even though she can be bitchy at times like at breakfast where she will bark at him because if she isn't looking he will eat her food. So, she lets him know to leave her food alone. It is hard to wake up in the morning hearing her bark at my older dog while she tries to eat her breakfast outside. So, even though I'm not into lap dogs at all my wife and daughter love this about her. I like the fact that if I'm feeling upset or bad about something she will come over and sit next to me and be comforting. Corgis are an extremely intelligent Sheep dog and they are good at catching either Gophers or rats and stuff like that.

The problem with this Corgi is if she is off leash in the forest she totally freaks out on a trail if a man or woman on a bicycle rides by. If that happens she will run to the car or truck from 2 to 3 miles away. But the first time she did this I thought I had lost her and was worried about my wife and daughter being upset. But, now this has happened about 10 times in the last 4 years so far and she just freaks out and runs to the car or truck. But the first time she tore a ligament in her right rear leg which cost about 3500 dollars or more to fix. But, since she has papers and is in a champion line of dogs I guess my wife thought it was worthwhile. So, if you like a big dog personality in a smaller dog that is sweet and personable and often talks maybe you should think about getting a Corgi.