Nato has accused Russia of a "blatant violation" of Ukraine's sovereignty and engaging in direct military operations to support pro-Russian rebels.
Secretary-General Anders Fogh Rasmussen said that "despite hollow denials", it was now clear that Russia had illegally crossed Ukraine's border.
He said Nato would respect any Ukrainian decision on security, after its PM said he was putting the country on course for Nato membership.
Russia denies sending troops and arms.
Russian President Vladimir Putin blamed the Ukrainian government for the crisis, comparing its siege of two cities held by separatists, Donetsk and Luhansk, to the siege of Leningrad by Nazi Germany in World War Two.
"It is necessary to make the Ukrainian authorities start substantial talks [with the rebels]," he said.

Jump media player
Media player help
Out of media player. Press enter to return or tab to continue.
Putin: "The situation sadly reminds me of the Second World War"
Nearly 2,600 people have been killed since April, the UN says, when Russia's annexation of Crimea prompted the rebels to take control of large parts of Donetsk and Luhansk regions.
Heavy fighting is continuing near Ukraine's strategic port of Mariupol, on the Azov Sea. Rebel forces are trying to capture the city but Ukrainian government troops are digging in.
Separatists are also reported to have surrounded government soldiers in several places further north, near Donetsk city.
Ukrainian forces near the town of Ilovaysk say they are cut off and have been urgently asking for supplies and reinforcements. 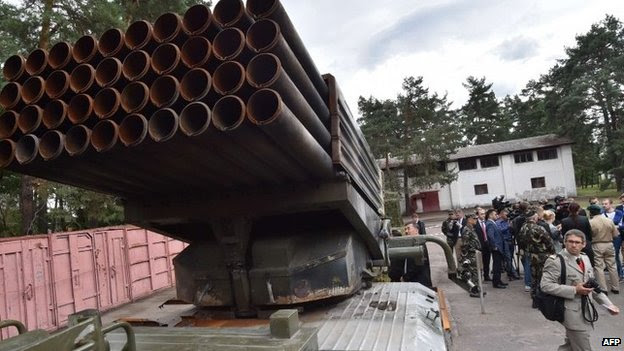 This Ukrainian tank was destroyed in fierce fighting at Savur-Mohyla, east of Donetsk 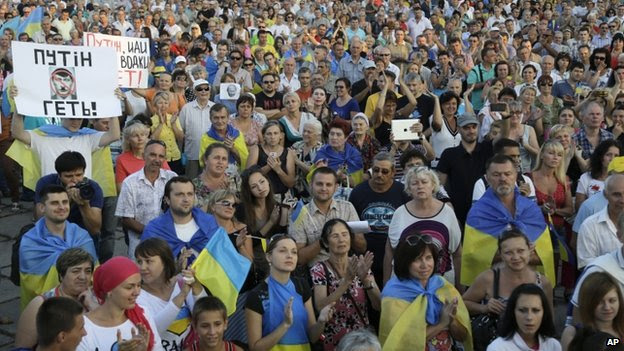 Residents of the strategic city of Mariupol staged an anti-war rally on Thursday
Earlier, Ukrainian Prime Minister Arseny Yatsenyuk said the government was reopening the question of Nato membership.
He said it was sending a bill to parliament calling for Ukraine's non-aligned status to be cancelled, in effect paving the way for Ukraine to join Nato.
'Dangerous pattern' Speaking at a news conference after an emergency meeting of Nato ambassadors, Mr Rasmussen said that it was clear Russia was engaged in direct military operations in Ukraine.
"This is not an isolated action, but part of a dangerous pattern over many months to destabilise Ukraine as a sovereign nation," he said.
"This is a blatant violation of Ukraine's sovereignty and territorial integrity. It defies all diplomatic efforts for a peaceful solution." 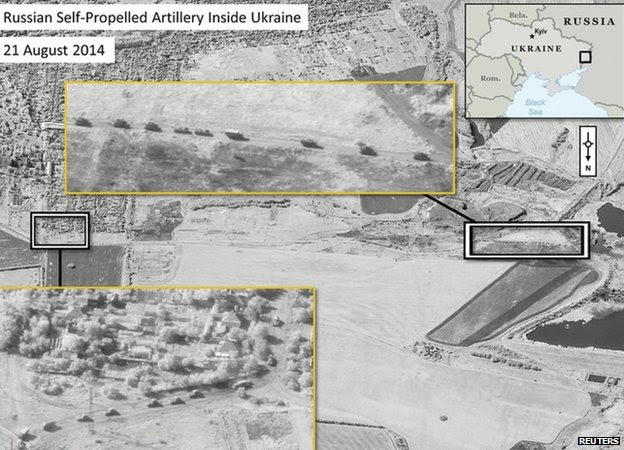 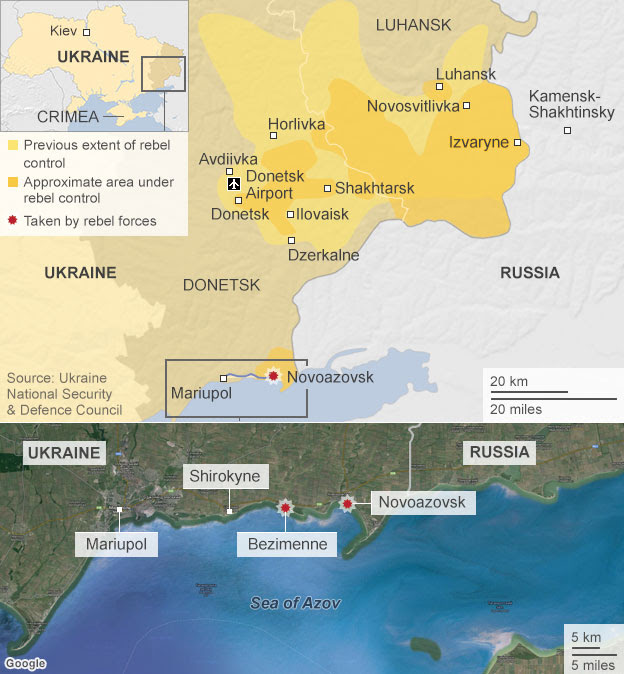 He called on Russia to cease military action, stop supporting the rebels and "take immediate and verifiable steps towards de-escalation of this grave crisis".
Mr Rasmussen indicated Nato was open to considering Ukraine's application to join if it met the conditions.
"I am not going to interfere with political discussions in Ukraine, but let me remind you of Nato's decision taken at the Bucharest Summit in 2008 according to which Ukraine will become a member of Nato, provided of course that Ukraine so wishes and provided that Ukraine fulfils the necessary criteria," he said.
On Thursday Nato released satellite images it said showed columns of Russian armed forces inside Ukrainian territory, adding that more than 1,000 Russian troops were operating inside Ukraine.
The rebel advance near Mariupol has raised fears that the Kremlin might seek to create a land corridor between Russia and Crimea.
On Thursday the separatists seized the nearby town of Novoazovsk.