NATO's outgoing secretary general is repeating his call for member countries like Canada to boost their defence spending in response to the "wake-up call" of recent crises like the one unfolding in Ukraine.
NATO: satellite images 'show Russian troops in Ukraine'
Russian fund with US advisers eludes sanctions
Moscow demands immediate release of Russian embassy staff in Kiev detained ...
On New Front Line, Some Ukrainians Lose Faith in Europe 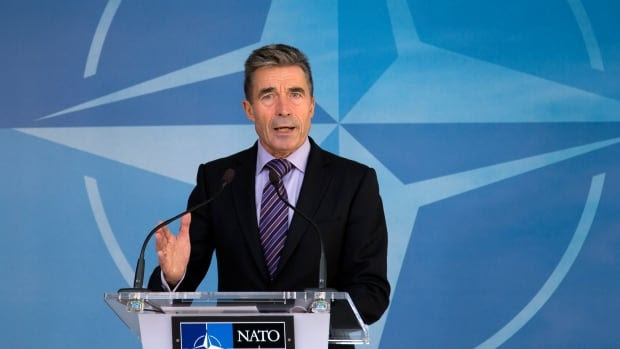 NATO's outgoing secretary general is repeating his call for member countries like Canada to boost their defence spending in response to the "wake-up call" of recent crises like the one unfolding in Ukraine.
In an interview airing Saturday on CBC Radio's The House, Anders Fogh Rasmussen, who will preside over his final NATO heads of government summit Sept. 4-5 in Wales, said that after 25 years of "relatively calm weather" the alliance now needs to reinforce its collective defence and adapt to what he calls "a profound climate change."
"We have lived in a relatively quiet security environment, but the crisis in Ukraine as well as what we're now seeing in Syria and Iraq [and] North Africa is a wake-up call," he told host Evan Solomon.
"You can compare it with insurance. NATO is... security insurance. And for an insurance you pay a premium," he said.
"Now the premium has gone up because of this unstable security environment and that's why we need more defence investments in the coming years."
Only four countries, including the United States and the United Kingdom, meet NATO's defence spending target of two per cent of a member country's gross domestic product (GDP.) Canada is among those that lag behind, spending 1.3 per cent of its GDP.
Canada cut defence spending, including scaling back costly military procurement programs, as part of government-wide efforts to balance the federal budget starting next year.
Meeting NATO's target could translate into billions of dollars of new spending for Canada over the next decade.
Rasmussen's funding appeal is not new. In 2012, in the aftermath of the economic crisis that saw European countries in particular trim their defence budgets, he warned that a sharp decline in the non-U.S. share of NATO’s defence spending was "unsustainable" and "undermined the alliance principle of solidarity."

Rasmussen told The House he was hopeful that leaders at next week's summit would reach a "common commitment" to gradually increasing defence investments.

Late Thursday, Reuters reported that Canada is among the countries blocking efforts toward that goal.
"We are open to increasing defence spending, but to specific ends," a Canadian source told Reuters. "The response to [the crisis in Ukraine] is not a 10-year commitment ... it's not more press releases, it's taking action, and I think in that regard Canada is actually pulling its weight."
In an email to CBC News on Friday, a spokeswoman for Defence Minister Rob Nicholson said the government would not comment on "anonymous rumours."
Germany also opposes the two per cent target and says it should not be seen as a sign of loyalty to the alliance.
"Despite all the talk among the Europeans about joint procurement, common defence strategy ... they've been singing from that songsheet since the end of the Cold War and have done precious little about it," says Fen Hampson, director of the global security and politics program at the Centre for International Governance Innovation.
"Its key members, and that includes Germany which has been cutting defence spending, are not prepared to put their shoulders to the tiller or the yoke to beef up defence spending in the face of what clearly is... a growing threat from Russia,"  Hampson says.


No 'military options' in Ukraine

Recent events in Ukraine have renewed the alliance's focus on its original Cold War foe. Strengthening co-operation between NATO and Ukraine is on the agenda at next week's summit, but that doesn't mean NATO's ready to join a shooting war.
"We are not considering military options," Rasmussen said. "If Russia were to intervene further in Ukraine I have no doubt the international community would have to respond firmly through deeper, broader and tougher economic sanctions that would isolate Russia further."
U.S. President Barack Obama also ruled out a military move against Russia during a news conference on Thursday.
But on Friday, Ukrainian Prime Minister Arseny Yatseniuk said his cabinet would "bring before parliament a law to scrap the non-aligned status of the Ukrainian state and establish a course towards membership of NATO."
Full membership would trigger an automatic military response from NATO for future Russian incursions across the Ukrainian border. Ukraine is scheduled to have parliamentary elections in late October, so it's unclear whether such a law will pass before then.
While not joining the fight now, NATO is helping to reform and modernize the Ukrainian armed forces, Rasmussen said.
Canada has been involved in training Ukrainian military and civilian personnel through its military training co-operation program and has provided $5 million in "non-lethal security assistance."
Ukrainian President Petro Poroshenko is scheduled to join NATO leaders in Wales, although the escalation of the conflict caused him to cancel other travel plans earlier this week.


Will NATO 'strengthen its resolve'?

When asked by a reporter Thursday whether the situation in Ukraine is now a war, Foreign Affairs Minister John Baird took great pains to stop just short, calling it "a very active intervention" and then "a very active invasion."
"To do this a week before NATO leaders meet in Wales is a significant provocation and completely unacceptable," Baird said. "This will undoubtedly strengthen the resolve of all NATO leaders ahead of their meeting."


'People will have to look at what measures they think are required from the civilized world.'- John Baird

"Some would say NATO's original rationale has come back: it's to deal with Russia, resurgent Russia," Hampson says. "But even there, the response is weak. And not characterized by great alliance unity."
"NATO's actually facing a crisis in terms of what continue to be fairly profound divisions in the alliance," Hampson added, pointing out that German Chancellor Angela Merkel has indicated she won't support further sanctions and would like to see the Ukrainians negotiate rather than fight with the Russians. 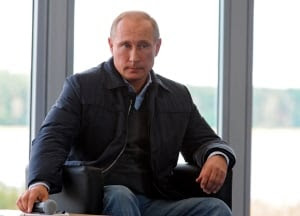 Russian President Vladimir Putin told students at a youth camp Friday that the Russian and Ukrainian peoples are practically one people. (Mikhail Klimentyev/Presidential Press Service/The Associated Press)
Baird told reporters Thursday that Merkel "has gotten progressively stronger and tougher" in her remarks over time and that first the downing of MH-17 and then this week's invasion mean "people will have to look at what measures they think are required from the civilized world."
"No one country can provide the response that we need," Baird said, "it's only by acting collectively."
On Thursday, Obama spoke with Merkel, who has been a key broker between the West and Russia, and they agreed Russia must face consequences for its actions.


Beyond Ukraine: who's next?

"I'm concerned that this goes beyond Ukraine," Rasmussen told The House.
"This is very much about establishing or re-establishing a zone of Russian influence in their near neighbourhood and that's why Russia has an interest in frozen and protracted conflicts not only in Ukraine but also in Transnistria in Moldova and also in Abkhazia and South Ossetia in Georgia, and they hope through these protracted conflicts to prevent these countries from seeking integration with NATO and the European Union."


'The Europeans are quite prepared to throw Ukraine overboard.'- Fen Hampson

Hampson thinks NATO is constrained by the fact that many alliance members are economically dependent on Russia.
"The Europeans I think are quite prepared to throw Ukraine overboard," he says. "That is a prescription for instability, conflict and usually disaster, and that's what happened prior to both the First and Second World War."
"The smaller countries — the Swedens, the Polands, of Europe who feel very exposed — they kind of wonder who's next," Hampson says.
"We have already taken immediate steps to enhance our collective defence through more air policing, deployment of naval vessels to the Black Sea and the Baltic Sea, more military exercises on the ground," Rasmussen said.
Canadian fighter jets are currently in Lithuania as part of stepped-up patrols on Russia's doorstep.
"I don't think the Kremlin is ignoring what NATO is doing. Actually I think the best protection a nation can get is membership of NATO because the Russians know that it would be to cross a red line if they were to attack a NATO ally," Rasmussen told The House.

MOBILE USERS: Listen to Rasmussen's interview with Evan Solomon for The House here
The House airs Saturday at 9:00 a.m. on CBC Radio One and Sirius FM Satellite Radio channel 169.

With files from Laura Payton, Reuters and The Associated Press
end quote from:

I actually agree with this. With Russian troops now going into Ukraine and dying at faster and faster rates (Ukraine troops too) it reminds me just too much of Hitler coming into European nations in the 1930s and 1940s. I think we might be in for the long haul once again.

So, looking at Ukraine like the first countries Hitler took might be useful for Canada, Europe, the U.S. and the rest of the world.