Putin Directly Addressed Rebels In Ukraine For The First Time, And He Used A Frightening Word To Describe Them

Beat the market. Get the app. 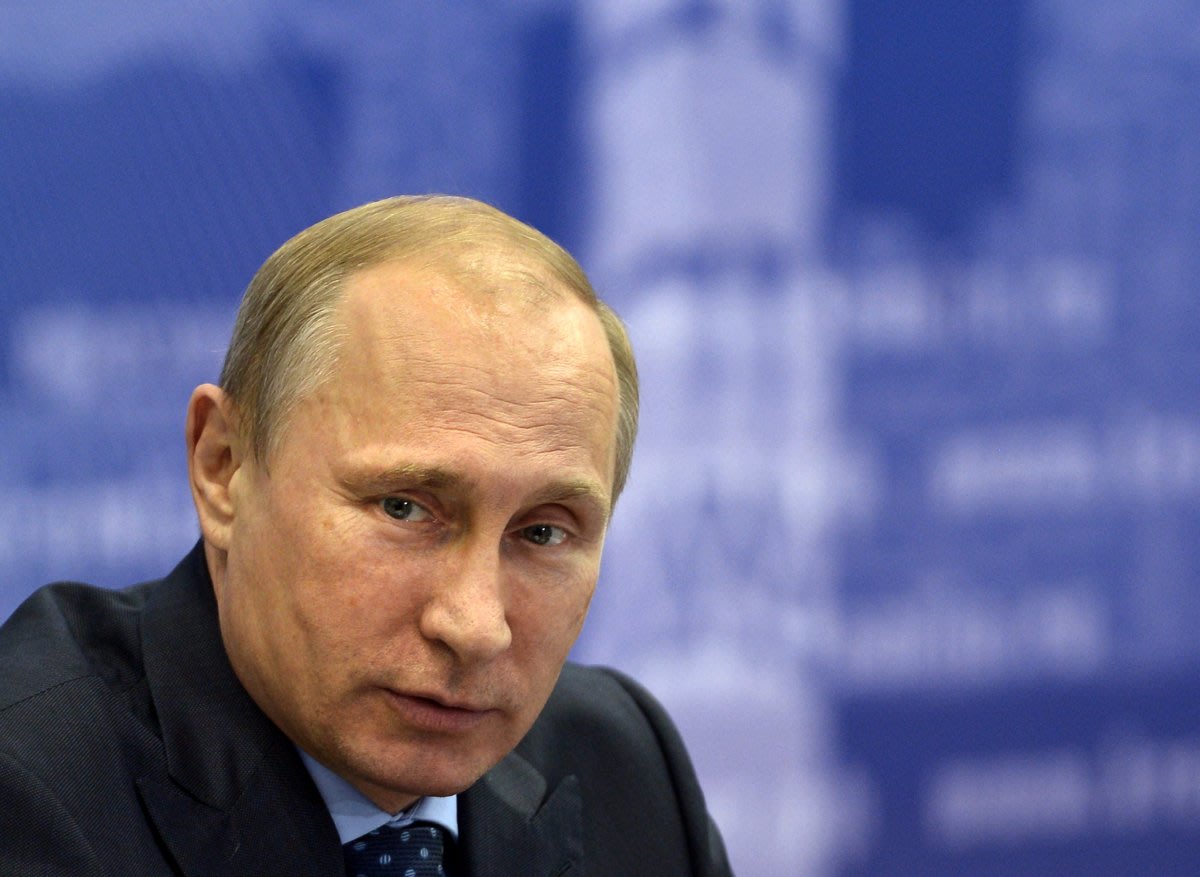 RIA-Novosti, Alexei Nikolsky, Presidential Press Service/AP
Russian President Vladimir Putin on Friday publicly addressed pro-Russian rebels fighting in southeastern Ukraine for the first time , praising their "major success" inside Ukraine.
The Kremlin released a late-night statement from Putin on its website in which he appealed to the militia of "Novorossyia," or "New Russia."
It's a term he has used before to describe the regions in eastern Ukraine where fighting has raged for months — a term that describes  the area north of the Black Sea that was conquered by Russia in the late 18th century through peace treaties with the Cossack Hetmanate and the Ottoman Empire. In 1922, the area became part of the Soviet Union. The term is mostly used now by Russian nationalists who wish for Russia to reconquer the area.
" It is clear the militia has achieved a major success in intercepting Kiev’s military operation, which represents a grave danger to the population of Donbass and which has already led to the loss of many lives among peaceful residents," Putin said in his statement to the militia. 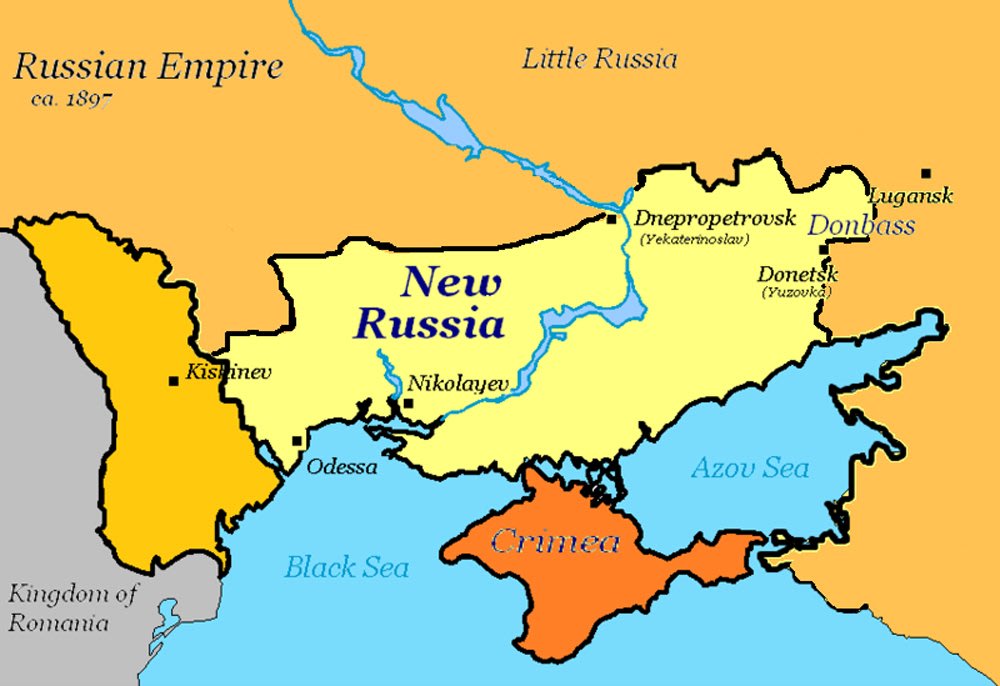 Wikimedia Commons
A map of "new Russia."
Putin's statement is notable because he has at multiple points in the months-long crisis denied any influence over the rebels. His words fueled Ukraine's charges that the pro-Russian separatists are essentially puppets whose strings are pulled by the Kremlin.
Ukraine and the West have charged Russia with arming, equipping, and training the pro-Russian rebels. And on Thursday, Ukrainian President Petro Poroshenko said Russian troops had come across the border to join the rebels in fighting.
Putin and Russia have denied any control over the rebels, declining repeated calls from Western leaders to intervene with the rebels at points to defuse the ongoing crisis. But Ukraine's military said Putin's statement made clear that the separatists have been "led and controlled directly from the Kremlin," according to The Washington Post.
This week, the rebels have opened a new front  in the cities of Amvrosiivka and Starobeshevo. One  fear is that Russia is attempting to create a land link between Russia and the strategic peninsula of Crimea,  which Russia  annexed  with special forces troops in March. Poroshenko said Russian t roops are  leading  a separatist counteroffensive in the east, bringing in tanks and firing artillery from inside Ukrainian territory.
In his statement, Putin went on to urge the militia of "New Russia" to allow for a humanitarian corridor for Ukrainian troops who have been surrounded to retreat.
"I  call on the militia groups to open a humanitarian corridor for Ukrainian service members who have been surrounded, so as to avoid any needless loss of life, giving them the opportunity to leave the combat area unimpeded and reunite with their families, to return them to their mothers, wives and children, and to quickly provide medical assistance to those who were injured in the course of the military operation," Putin said.
Meanwhile, the West hinted Thursday at stronger, more punishing sanctions. President Barack Obama said he had spoken to German Chancellor Angela Merkel on Thursday and the two agreed that Russia was "responsible" for the escalating violence in eastern Ukraine.
"Russia is responsible for the violence in eastern Ukraine," Obama said in a statement from the White House. " This ongoing Russian incursion into Ukraine will only bring more costs and consequences for Russia."
Here's the situation in eastern Ukraine on Friday, according to Ukraine's military: 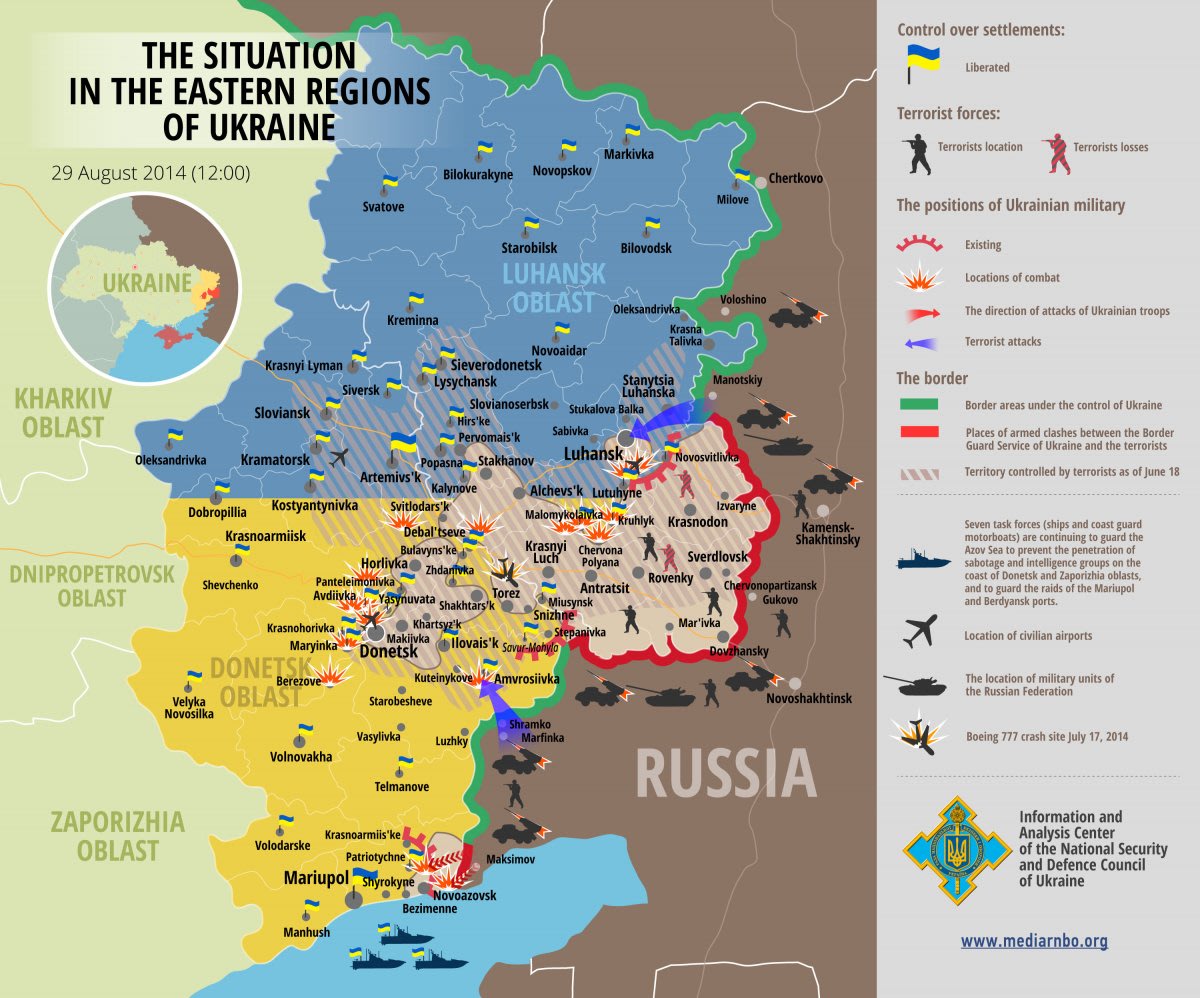 Email ThisBlogThis!Share to TwitterShare to FacebookShare to Pinterest
Labels: Putin and "New Russia?"