It was late fall and there was frost out this morning. It was in the early 1980s when I had bought remote land at around 4000 feet in elevation on Mt. Shasta in the Mt. Shasta Subdivision near to McCloud. I built myself an A-Frame with my father's help and friends help and my wife's help and my kids help over the course of a summer. So, I'm 10 miles at least or more from the nearest powerline or gas station and three miles from the nearest paved road. We loved it there unless we were snowed in by 7 feet or more of snow. Then life was more difficult and usually rented a place in town until the snow got back down to 2 to 3 feet once again. I could push about 2 to 3 feet of snow with my International Harvester Scout II 1974 because it was a really amazing 4 wheel drive vehicle unlike any I owned before or since. Incredible ground clearance, locked rear end, 6 cylinder engine, high and low range 4 wheel drive.

Anyway, this morning I decided to take a walk over the land and see what I could see. Soon, I found myself being scolded by a (laughing) Fairydiddle which is a type of flying squirrel native to the Mt. Shasta area. They usually like really tall Cedar trees like the one this one was on. I heard the racket
and so I followed all the noise to the fairydiddle. It was standing on the side of the biggest cedar tree in the forest which was at least 5 feet through. I began laughing as I walked closer at the antics of a crazy squirrel with ear tufts like a fairydiddle has standing upside down on the side of a tree bouncing each time it made this horrendous laughing yelling sound. It was at least 10 feet high and I finally realized it was making this racket so I would leave. I kept laughing for a time while looking at this totally ridiculous scene alone there with the squirrel and finally realized that this actually would be a good method to make most creatures that might eat this squirrel leave. I didn't want to eat it but anything else couldn't hunt anything else because this noise would send literally all creatures as far away from this sound as possible including birds and any mammals. So, in this sense the fairydiddle was like a dog barking for literally any creature nearby. I thought of this too.

However, I also found it very endearing and I often think of this experience as being one of the really amazing funny, happy, wild experiences of my life which never can be replaced. I'm grateful I love nature like I do. It brings me great peace in my life. So, whenever I can I spend time in nature with all my forest friends.

Note: I was watching a nature reality show with a guy getting to know a herd of mule deer. The most interesting thing about this was he discovered (just like with Baboons the females actually sort of run things while the males mostly jocky for who gets to mate with the females. So, the alpha female in this sense is more important than the alpha males. So, when he made friends with the Alpha female the whole herd became his friend and allowed him to be near to them and began to trust him. This sort of made me remember my time living in the wilds in Mt. Shasta 10 miles from the nearest service station or electric lines and 3 miles from the nearest paved road. Living remote is really amazing as long as you can survive when 7 to 10 feet of snow falls all at once in a place like I lived in the 1980s.

In regard to the squirrel it was upside down like this one making a racket: 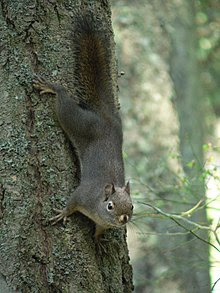 Also, because of it's position on the tree and distinct call likely what I saw was a Douglas Squirrel after researching it at Wikipedia:

From Wikipedia, the free encyclopedia
The Douglas Squirrel, scientific name Tamiasciurus douglasii, is a pine squirrel found in the Pacific coastal states and provinces of North America. It is sometimes known as the Chickaree or Pine Squirrel, but since Chickaree is also used for the American Red Squirrel and Pine Squirrel for the genus Tamiasciurus, these alternative names are better avoided. Variant spellings of the common name are Douglas' Squirrel and Douglas's Squirrel. The Native Americans of Kings River called it the "Pillillooeet", in imitation of its characteristic alarm call.

John Muir described the Douglas Squirrel, Tamiasciurus douglasii, as "by far the most interesting and influential of the California sciuridæ". It is a small, lively, bushy-tailed tree squirrel, enchanting to watch. Adults are about 33 cm in length (including its tail, which is about 13 cm long), and weigh between 150 and 300 grams. Their appearance varies according to the season. In the summer, they are a grayish or almost greenish brown on their backs, and pale orange on the chest and belly, while legs and feet appear brown. In the winter, the coat is browner and the underside is grayer; also, the ears appear even tuftier than they do in summer. Like many squirrels, Douglas Squirrels have a white eye ring.
Mating can occur as early as February. Gestation is about four weeks, and the young (which are altricial) are weaned at about eight weeks of age. There may be up to six kits in a litter, though four is more usual. In the southern and lower parts of their range they produce two litters each year.

Douglas Squirrels live in coniferous forest habitats, from the Sierra Nevada (mountains) of California, northwards to coastal British Columbia and Southeast Alaska. Tamiasciurus douglasii prefer old-growth forests or mature second-growth forests, and some authors regard them as dependent on its presence.
They are territorial; in winter, each squirrel occupies a territory of about 10 000 square metres, but during the breeding season a mated pair will defend a single territory together. Douglas Squirrels are active by day, throughout the year, often chattering noisily at intruders. In summer nights, they sleep in ball-shaped nests that they make in the trees, but in the winter they use holes in trees as nests. Groups of squirrels seen together during the summer are likely to be juveniles from a single litter.

Douglas Squirrels mostly eat seeds of coniferous trees such as Douglas Fir (Pseudotsuga menziesii), Sitka Spruce (Picea sitchensis) and Shore Pine (Pinus contorta). They also eat acorns, berries, mushrooms, the eggs of birds such as Yellow Warblers, and some fruit including strawberries and plums. Unlike many other types of tree squirrel, they lack cheek pouches in which to hold food. They are scatter hoarders, burying pine cones (which they cut from the trees while green) during the autumn. They often use a single place, called a midden, for peeling the scales off cones to get at the seeds. The discarded scales may accumulate for years, into piles more than a meter across as the same site is used by generations of squirrels.
Their predators include American Martens, Bobcats, domestic cats, Northern Goshawks, and owls; although they quickly acclimatise to human presence, humans can be a threat to them, through robbing of their cone caches to find seeds for tree cultivation and through the destruction of old growth forest. However, the squirrels' numbers appear to be unaffected by commercial thinning of forests.[4] 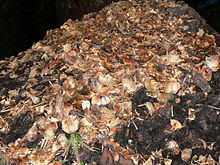 Email ThisBlogThis!Share to TwitterShare to FacebookShare to Pinterest
Labels: The Laughing Fairydiddle