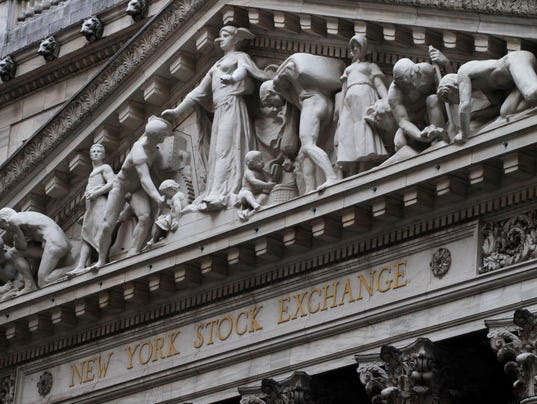 (Photo: Mark Lennihan, AP)
62 CONNECT 55 TWEET 4 LINKEDIN 4 COMMENTEMAILMORE
The Standard & Poor's 500-stock index crossed the 2000 level for the first time in early trading Monday, the latest stock market milestone in the powerful bull market that began in March 2009.
The benchmark U.S. stock index briefly topped the psychologically important 2000 mark at 10.11 a.m. ET.
It took just 94 days to climb from 1900 to 2000, putting an exclamation point on a bullish 12-month period for the S&P 500 in which it plowed through 1700, 1800 and 1900 on its way to its maiden voyage above 2000, according to data from S&P Dow Jones Indices.
Since the bull market began on March 9, 2009, the S&P 500 has nearly tripled in value, rising nearly 196%. It is up nearly 8% now for the year.
It took the S&P 500 more than 16 years to double in value from 1000 to 2000. It first crossed the 1000 level on Feb. 2, 1998. The large-company stock index's forward progress was slowed down by the stock market routs following the 2000 technology-stock crash and the 2008-09 financial crisis. It took the the index more than 13 years to go from 1500 (March 22, 2000) to 1600 (May 3, 2013).
The rally in stocks Monday was powered by more deal activity in corporate America, including a report that fast-food giant Burger King is in talks to buy Canadian doughnut chain Tim Hortons, and comments from central bankers in Europe and Japan over the weekend that more market stimulus is in the pipleline.
Stocks have rallied three straight weeks as investors bet on signs of an improving U.S. economy and react to a better-than-expected second-quarter earnings season, where companies in the S&P 500 posted profit growth of 8.4%. Strong incoming data on the economy has enabled investors to shrug off geopolitical worries. The stock market, however, is no longer deemed cheap; some argue that the market is trading inline with historical norms, while bears warn that stocks are getting pricey.
In anticipation of 2000 on the S&P 500, a trio of Wall Street strategists issued reports before today's opening bell reiterating their year-end price targets for the index — with all of the targets north of 2000.
Craig Johnson, technical market strategist at Piper Jaffray, reiterated his call for the S&P 500 to finish the year at 2100.
"Thus far, the market has shrugged off bad news and has shown an amazing resilience as it progresses higher," he told clients Monday.
Jonathan Golub, chief U.S. market strategist at RBC Capital Markets, said Monday he was sticking with his year-end target of 2075. Similarly, John Stoltzfus, chief market strategist at Oppenheimer reiterated his year-end call of 2014.
Despite the higher price targets, the additional gains predicted are not in the double-digit percentage gain category. If the S&P 500 climbs to 2100, for example, that equates to a gain of 5%.
end quote from:

Email ThisBlogThis!Share to TwitterShare to FacebookShare to Pinterest
Labels: S&P 500 tops 2000 for the first time