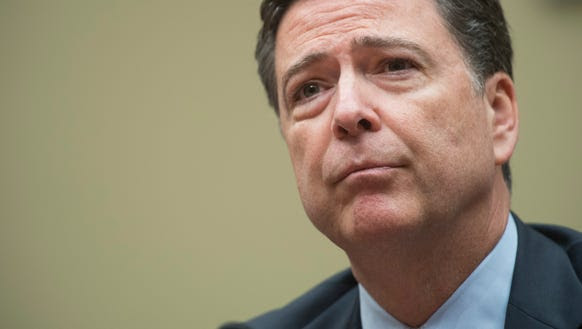 —FBI Director James Comey during testimony before the Oversight Committee on, July 7, 2016. (Photo: Jack Gruber, USA TODAY)
A bipartisan group of nearly 100 former federal prosecutors and senior Department of Justice officials, including Attorney General Eric Holder, have signed a letter expressing concerns over FBI Director James Comey’s decision to inform Congress of new emails that may or may not be relevant to Hillary Clinton’s private email server.
“Many of us have worked with Director Comey; all of us respect him,” said the letter, which was released Sunday night by the Clinton campaign. “But his unprecedented decision to publicly comment on evidence in what may be an ongoing inquiry just eleven days before a presidential election leaves us both astonished and perplexed,” said the signatories.
“We cannot recall a prior instance where a senior Justice Department official — Republican or Democrat — has, on the eve of a major election, issued a public statement where the mere disclosure of information may impact the election’s outcome, yet the official acknowledges the information to be examined may not be significant or new.”

Story from Toyota Camry
Western Australia is the bold destination you shouldn’t miss The letter comes after Senate Minority Leader Harry Reid, the top Democrat, sent a separate letter Sunday to Comey saying he may have violated a federal law that bars federal officials from using their authority to influence an election.
Here is the full letter:

As former federal prosecutors and high-ranking officials of the U.S. Department of Justice, we know that the impartiality and nonpartisanship of the United States justice system makes it exceptional throughout the world.  To maintain fairness and neutrality, federal law enforcement officials must exercise discipline whenever they make public statements in connection with an ongoing investigation.  Often, evidence uncovered during the course of an investigative inquiry is incomplete, misleading or even incorrect, and releasing such information before all of the facts are known and tested in a court of law can unfairly prejudice individuals and undermine the public’s faith in the integrity of our legal process.

For this reason, Justice Department officials are instructed to refrain from commenting publicly on the existence, let alone the substance, of pending investigative matters, except in exceptional circumstances and with explicit approval from the Department of Justice officials responsible for ultimate supervision of the matter.  They are also instructed to exercise heightened restraint near the time of a primary or general election because, as official guidance from the Department instructs, public comment on a pending investigative matter may affect the electoral process and create the appearance of political interference in the fair administration of justice.

It is out of our respect for such settled tenets of the United States Department of Justice that we are moved to express our concern with the recent letter issued by FBI Director James Comey to eight Congressional Committees.  Many of us have worked with Director Comey; all of us respect him.  But his unprecedented decision to publicly comment on evidence in what may be an ongoing inquiry just eleven days before a presidential election leaves us both astonished and perplexed. We cannot recall a prior instance where a senior Justice Department official—Republican or Democrat—has, on the eve of a major election, issued a public statement where the mere disclosure of information may impact the election’s outcome, yet the official acknowledges the information to be examined may not be significant or new.

Director Comey's letter is inconsistent with prevailing Department policy, and it breaks with longstanding practices followed by officials of both parties during past elections.  Moreover, setting aside whether Director Comey's original statements in July were warranted, by failing to responsibly supplement the public record with any substantive, explanatory information, his letter begs the question that further commentary was necessary.  For example, the letter provides no details regarding the content, source or recipient of the material; whether the newly-discovered evidence contains any classified or confidential information; whether the information duplicates material previously reviewed by the FBI; or even “whether or not [the] material may be significant.”

Perhaps most troubling to us is the precedent set by this departure from the Department’s widely-respected, non-partisan traditions.  The admonitions that warn officials against making public statements during election periods have helped to maintain the independence and integrity of both the Department’s important work and public confidence in the hardworking men and women who conduct themselves in a nonpartisan manner.

We believe that adherence to longstanding Justice Department guidelines is the best practice when considering public statements on investigative matters.  We do not question Director Comey’s motives. However, the fact remains that the Director’s disclosure has invited considerable, uninformed public speculation about the significance of newly-discovered material just days before a national election.  For this reason, we believe the American people deserve all the facts, and fairness dictates releasing information that provides a full and complete picture regarding the material at issue.