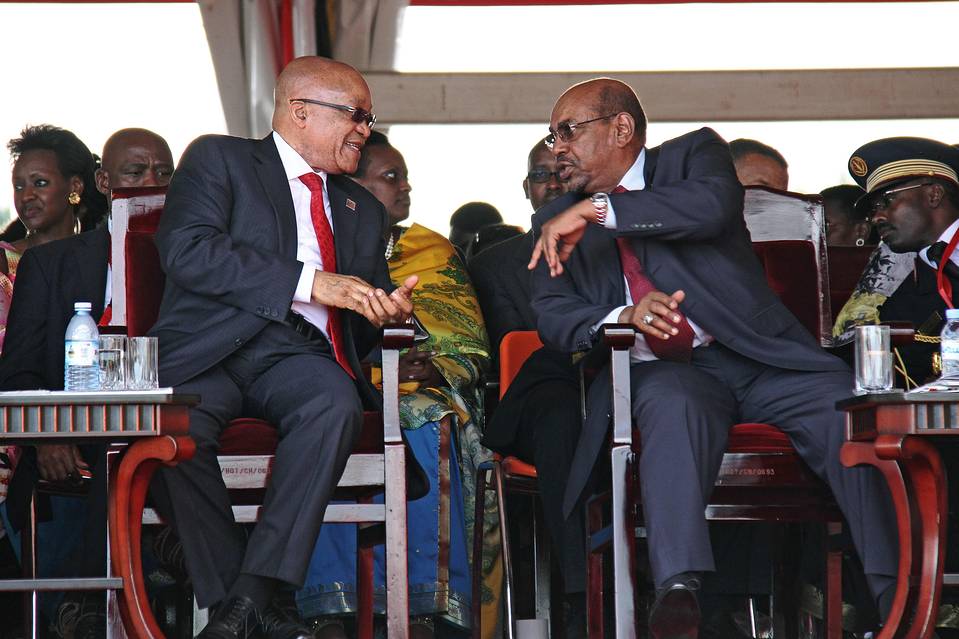 ENLARGE
South Africa's President Jacob Zuma, left, speaks with Sudan's President Omar al-Bashir in Kampala, Uganda, on May 12. Mr. Zuma’s government has been criticized for failing to arrest Mr. Bashir when he was in South Africa for a summit last year. Photo: Agence France-Presse/Getty Images
By
Gabriele Steinhauser
Updated Oct. 21, 2016 4:46 a.m. ET
6 COMMENTS
JOHANNESBURG—South Africa said it has initiated its withdrawal from the International Criminal Court, dealing a painful blow to the embattled tribunal from Africa’s most prominent democracy and one of its earliest supporters.
The decision, confirmed by Justice Minister Michael Masutha on Friday, tears into the fabric of the ICC, a beacon of post-Cold War enthusiasm for international law that was initially embraced by many African nations. Former South African President Nelson Mandela once said the court might have prevented many of the “horrors emanating from the inhumanity of human beings towards human beings” that had haunted the continent.
But several African leaders have turned against the Netherlands-based court in recent years, accusing it of a misplaced, neocolonialist focus on their countries.
Mr. Masutha said South Africa would extract itself from the ICC to focus on continental instruments and institutions, such as the African Court of Human and Peoples’ Rights, which preserves diplomatic immunity for sitting heads of state and government.
The decision was spurred by domestic legal pressures following the government’s failure last year to arrest the Sudanese President when he visited for an African Union summit, the minister said at a news conference. The government ferried Omar al-Bashir, who is wanted by the ICC for allegedly instigating genocide in the Dafur region of Sudan, out of the country despite a domestic court order to arrest and transfer him to The Hague-based court.
“South Africa has to [effect ICC warrants] even under circumstances where we are actively involved in promoting peace, stability and dialogue in those countries,” Mr. Masutha said.
A spokesman for the ICC declined to comment on South Africa’s move.
Legal experts said South Africa’s decision could trigger a domino effect from other member states.
“This will have a ripple effect…not only within Africa, but elsewhere as well,” said Mark Drumbl, director of the Transnational Law Institute at Washington and Lee University. He added that he wasn’t sure whether the court would recover if many other countries followed in South Africa’s tracks.
Earlier this week, Burundi’s president Pierre Nkurunziza signed a bill to withdraw the country from the Rome Statute, the court’s founding treaty. Burundi has been subject to a preliminary investigation by the ICC’s prosecutor, Gambian jurist Fatou Bensouda, into deadly violence in the east African nation, since Mr. Nkurunziza’s contentious decision last year to pursue a third term.
The ICC was established in 2002 to punish, in the words of the statute, “the most serious crimes of concern to the international community.” But the U.S., China and Russia, along with more than 60 other countries, never signed up to the court, seriously hampering its reach and preventing it from investigating bloody conflicts such as the war in Syria.
Corrections & Amplifications:
An earlier version of this article misspelled the name of Dewa Mavhinga, senior researcher for the African division of Human Rights Watch.
Instead, the ICC has mostly focused on violence in African nations, which have so far furnished all of the court’s defendants.
The African Union has in recent years tried to push through changes to the Rome Statute that would give immunity to leaders—an idea that clashes with one of the ICC’s core principle of ending impunity even for the powerful. At its summit in July, the AU discussed a motion to withdraw from the court en masse, but the motion eventually failed amid opposition from Botswana, Nigeria and others.
South Africa’s minister of international relations, Maite Nkoana-Mashabane had on Monday notified the United Nations’ secretary-general of the country’s intention to withdraw from the ICC, triggering a one-year extraction period.
Mr. Masutha said the government would soon propose to Parliament a bill that would end the domestic application of the Rome Statute.
Opposition parties decried the notification as illegal, but it was welcomed by the chief whip of the ruling African National Congress, which commands a broad majority in the legislature.
The ICC can launch investigations in all of the 124 countries that have ratified the Rome Statute when domestic authorities have failed to do so. Governments can also request the ICC to intervene—as happened in Uganda and the Central African Republic. The court can also take up referrals from the U.N. Security Council, including the one against Mr. Bashir.
Write to Gabriele Steinhauser at gabriele.steinhauser@wsj.com