As Wikileaks "CORRUPTS" the election day by day we see just how insane this election actually is. However, 80% to 90% of all voters already have decided who they will vote for. However, with 10 to 20% undecided still likely this election is still up for grabs in some ways. However, Wikileaks from Russia is likely grinding down some voters just like Trump bedding 15 year old models from his agency and giving them cocaine is also weighing down on the election as well.

It's no wonder these two candidates make most of the world nauseated in various ways. And the world is likely as scared as it ever was since I was born this year because of this too. (I was born around 1950.)

Powell: Clinton camp trying to 'pin it on me'

Powell: Clinton camp trying to 'pin it on me'

Washington (CNN)It's shaping up to be a new part of the morning routine for DC's elite: Grab coffee, skim the news and type your name into WikiLeaks to see what damage the day's hacked emails might hold for you.
And the fallout isn't just political; it's personal.
Amid the campaign strategy, snide comments and other headline fodder culled from the hacked accounts of Hillary Clinton's campaign chairman, John Podesta, and groups including the Democratic National Committee, the emails include the private information of a large number of bystanders, ranging from email addresses to financial data.
"It's just awful," said one individual not involved in the campaign who has been caught up in the Podesta hack. The person requested anonymity for the sake of security.
"I've had sleepless nights," the individual continued, "because it's like, what if I sent him an email saying, 'My Aunt Sally was here this weekend and she is just terrible?' Because you say that to your friends, you confide in your friends, and who knows what's in there of your personal life and your professional life." 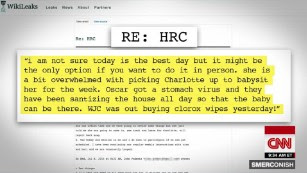 Wikileaks: Bad for democracy? 04:57
The Clinton campaign has refused to confirm or deny the authenticity of any of the emails and has accused WikiLeaks of working with the Russian government in releasing them. WikiLeaks and the Russians have denied the charge, though US officials have pointed the finger at Moscow for meddling in the US election through cyberattacks.
The website has faced criticism in the past for its tendency not to screen releases for personally identifiable information or security sensitivities, including from famed National Security Agency leaker Edward Snowden.
Now for more than two weeks, WikiLeaks has each day dumped thousands of unredacted emails online and shows no signs of letting up.

In addition to the campaign's inner workings, the Podesta emails -- which go back to the 2008 race -- have contained personal email addresses and even cellphone numbers for a wide range of DC personalities, from current and former members of Congress and Cabinet secretaries all the way up to the President himself.
Also included are the vetting documents and resumes of people seeking jobs with the Obama administration and Clinton campaigns, and even communications between Podesta and his students at Georgetown Law. In at least one case, sensitive financial information was contained in the emails published online. 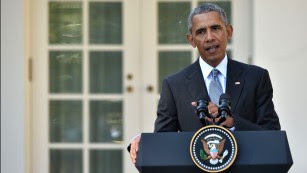 WikiLeaks reveals emails with Obama's personal address 01:04
The documents WikiLeaks posted earlier this year that were hacked from the DNC and congressional candidate committees included financial and personal information for hundreds of top donors.
The information introduces these peripheral individuals to a range of risks. The most obvious may be public embarrassment, as dirty laundry is aired in the press. But there are other dangers, including personal security and financial fraud.
Once an email address or phone number is released, it opens those individuals up to both the nuisance of being inundated with harassing calls and emails and the possibility that they may be targeted by phishing or scams to try to lure them into further traps.
With resumes, vetting forms and other sensitive documents, the dangers can increase to identity theft and the risk extended to family, friends and professional contacts.

Some people may have no idea they're even at risk. But the ones that do are rushing to take precautions.
"I've got a new email address, I've got all kinds of new security provisions, new computers, and I'm changing how I use email. I'm not candid anymore," said the individual whose information WikiLeaks released, though he acknowledged, "I may be locking the barn door after the horse escapes."
"I hired a cybersecurity firm and I'm not rich," he added. "I've spent for me what's an enormous amount of money."
Fox News pundit Juan Williams wrote a first-person account of the reaction to his cellphone number being in the hack -- and how what he described as an innocuous email was quickly misinterpreted. 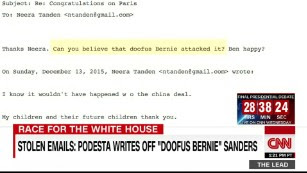 Wikileak shows Clinton campaign chair calling Sanders 'doofus' 05:10
"The flood of anonymous calls began politely, checking to see if it was really me. Then they sank into rude and threatening language," Williams wrote for The Hill. "By 4 a.m., I figured out that a new batch of hacked emails from Hillary Clinton's campaign chairman, John Podesta, had been released, including a note I wrote to Podesta with my cell number."
In a similar vein, Huffington Post reporter Sam Stein tweeted about his own run-in with the ripple effects of the hack.
"To the exquisite creep who got my # off Wikileaks, I was gonna say: Jews don't believe in hell," Stein tweeted about his experience.
Podesta has mostly been quiet about the impact of the hack on himself, though he did answer reporters' questions about it on a campaign trip earlier this month.

"My personal reflection is that anybody, any individual ... any of the people on this plane, if you think you would like all the contents of your emails for 10 years dumped out into public, think about how that feels. It doesn't feel great," Podesta said. "They may preempt my campaign book by doing so. But I am kind of zen about it at this stage, personally."
He also tweeted pictures of himself making risotto, a tongue-in-cheek reference to cooking advice he gave in an email.
The individual stung in the hack said it's understandable that journalists go through the emails for news, saying the First Amendment freedom trumps personal privacy.
But he also lamented that more focus hasn't been put on the fact that a crime was committed.
"A friend of mine who was also caught up in this said this: 'It's like somebody robbed a bank and as they're running away the money is spilling out of the backpack and instead of catching the criminal everyone is stopping to chase the money.' "
Posted by intuitivefred888 at 12:54 PM