Departing senators warn: There's a problem with the current state of politics

There's a problem with the current state of politics

US general: Want to leave a unified Afghanistan

No deal to end shutdown as Congress returns

GOP lawmaker: It could be a long shutdown

Graham: There will never be a deal without wall

Conway reacts to John Kelly's 'it's not a wall' remark

Trump blames Dems for deaths at the border

Maine's governor certified election results. But he wasn't happy about it

US general: Want to leave a unified Afghanistan

No deal to end shutdown as Congress returns

GOP lawmaker: It could be a long shutdown

Graham: There will never be a deal without wall

Conway reacts to John Kelly's 'it's not a wall' remark

Trump blames Dems for deaths at the border

Maine's governor certified election results. But he wasn't happy about it

(CNN)As departing senators said their goodbyes to Washington, a number of Democrats and Republicans took the opportunity to express concern about the state of the Senate and the political climate.
"All the evidence points to an unsettling truth: The Senate as an institution is in crisis," retiring Republican Sen. Orrin Hatch of Utah lamented in his farewell speech delivered on the Senate floor.
Sen. Claire McCaskill, who was defeated in the November midterm elections, echoed that idea when she delivered her own farewell speech. "I'd be lying if I didn't say I was worried about this place," she said. "It just doesn't work as well as it used to."
"Something is broken," the Missouri Democrat went on to say. "If we don't have the strength to look in the mirror and fix it, the American people are going to grow more and more cynical."
Sponsor content by twofour54
Transforming the nature of news in Abu Dhabi
Situating the headquarters of this regional newspaper in a hub that skilfully combines education, business, creativity and innovation helps it compete.
As senators who were either ousted in the elections or decided to retire and not seek another term reflected on their time in Congress, many expressed dismay at how divided Washington has become as lawmakers retreat to entrenched partisan positions that leave little room for compromise or common ground.
Most of them spoke in the final weeks of the year, a time largely overshadowed by a flurry of last-minute legislative activity and an unsuccessful effort to stave off a partial government shutdown. But the shuttering of roughly 25% of the federal government appeared to help illustrate a common sentiment conveyed during many of these farewell speeches: that something would need to change for Washington to function properly.

'This is not a normal time'

McCaskill and Hatch weren't the only ones sounding alarm bells.
"To say that our politics is not healthy is somewhat of an understatement," retiring Sen. Jeff Flake said in his farewell speech. "I believe that we all know well that this is not a normal time and that the threats to our democracy from within and without are real." 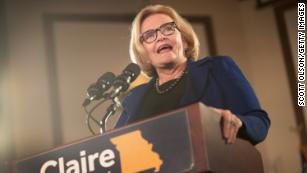 McCaskill warns Dems about 'cheap' rhetoric; says GOP senators privately believe Trump is 'nuts'
The Arizona Republican, a frequent critic of President Donald Trump, went beyond a critique of American politics to say he believes an "authoritarian impulse" is experiencing a resurgence worldwide and that the "global commitment to democracy seems now to be on somewhat shaky ground."
But while departing senators had unique messages to impart, the overarching idea that there's a problem with the current state of politics was a consistent theme.
"What in the world has happened to civility and to humility in our nation's public discourse?" Sen. Bill Nelson, a Florida Democrat who lost his seat in the midterms, asked in his farewell speech.
"Tribalism is our problem, and if not corrected, it's going to take our country down," he warned.

Year marked by 'loss of comity'

The farewell speeches came as the most recent session of Congress drew to a close in late December -- a session that has been punctuated by a series of bitterly contentious fights on Capitol Hill.
Senators split almost entirely along party lines in the fight to confirm Brett Kavanaugh to the Supreme Court, a battle that saw Christine Blasey Ford, a college professor from California, testify before lawmakers that Kavanaugh had sexually assaulted her in the 1980s when they were in high school and Kavanaugh vehemently deny the accusation.
Tensions ran high between Democratic and Republican senators during the confirmation hearings. In one dramatic moment, Republican Sen. Lindsey Graham of South Carolina accused his Democratic colleagues of trying to "destroy" Kavanaugh's life for political gain. 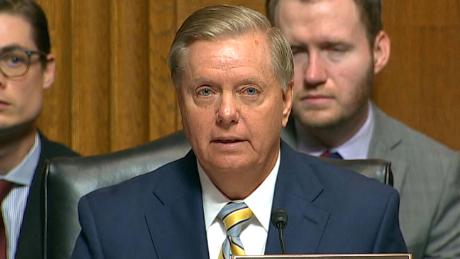 Graham has message for Kavanaugh daughters 00:42
In the end, only one Republican -- Sen. Lisa Murkowski of Alaska -- opposed the nomination, while just one Democrat -- Sen. Joe Manchin of West Virginia -- sided with Senate Republicans to elevate Kavanaugh to the Supreme Court.
Hatch said during his farewell speech that "many factors contribute to the current dysfunction," but added, "If I were to identify the root of the crisis it would be this: the loss of comity and genuine good feeling among Senate colleagues."
In yet another sign of division between the two parties, 2018 started off with a government shutdown at the end of January and ended with another fight in December, when a standoff between Trump and Democrats over funding for a border wall triggered a partial shutdown that began just days before Christmas.

Don't be afraid of 'tough votes' and other advice

As departing senators outlined concerns in their farewell speeches, many described what they believe has contributed to the highly divisive political climate and what they think needs to change.
McCaskill urged lawmakers to have the courage to take "tough votes."
"Solving the toughest problems will not happen without tough votes," she said. "We can talk about the toughest problems ... we can argue about them, we can campaign on them, but we're not going to solve them without tough votes."
Nelson and outgoing Democratic Sen. Joe Donnelly of Indiana, who also lost his seat in the midterms, suggested that an influx of big money in politics has had a corrosive effect, making an argument common to the Democratic Party.
"The court's 2010 decision opened the floodgates and allowed the wealthiest Americans to spend unlimited amounts of money to influence our elections and corrupt our democracy," Nelson said, referring to the landmark 2010 Citizens United Supreme Court ruling.
In his farewell speech, Donnelly said that "the divisive rhetoric, the political campaigns, increasingly funded by tens of millions of dollars, anonymous, dark money interests is really doing damage to this country."
Nelson argued that another issue is the "constant attempts to disenfranchise voters and make it more difficult for every American to have their voice heard at the ballot box."
Hatch, meanwhile, decried "identity politics," a concept often invoked critically by Republicans, who frequently accuse Democrats of subscribing to it.
"We must reject the politics of division, starting with identity politics," the Utah Republican said, adding that "identity politics is nothing more than dressed-up tribalism. It is the deliberate and often unnatural segregation of people into categories for political gain."

'I love this place'

In their farewell speeches, departing senators also reflected on fond memories of their time in Congress, and some expressed optimism for the future despite their concerns.
"For all the problems I've outlined, know that I love this place," McCaskill said. "We have fought, we have cried and we have laughed together. Just like family."
"For more than four decades, I have had the distinct privilege of serving in the United States Senate," Hatch said, adding, "speaking on the Senate floor, debating legislation in committee, corralling the support of our colleagues on compromise legislation -- these are the moments I will miss. These are the memories I will cherish forever."
Hatch went on to say that "to address this body is to experience a singular feeling: a sense that you are a part of something bigger than yourself, a minor character in the grand narrative that is America." 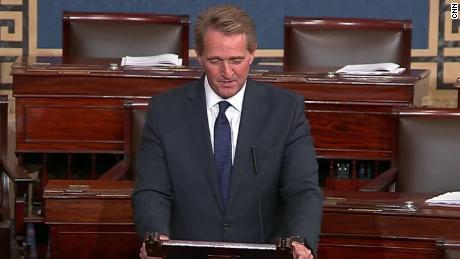 See Flake's goodbye speech on Senate floor 00:56
Flake called it "the honor of my life to represent my home, Arizona, in the United States Senate."
Despite his warnings, he said he was leaving the Senate "grateful and optimistic."
"Serious challenges lie ahead, but any honest reckoning of our history ... will note that we have confronted and survived more daunting challenges than we now face," Flake said. "Ours is a durable, resilient system of government, designed to withstand the foibles of those who sometimes occupy these halls."
end quote from:
https://www.cnn.com/2018/12/29/politics/departing-senators-senate-retirements-advice-congress/index.html

Email ThisBlogThis!Share to TwitterShare to FacebookShare to Pinterest
Labels: Departing senators warn: There's a problem with the current state of politics