Paul: We could get $5B for wall if we did this

Boy dies in US custody on Christmas Eve

Trump asks child if she believes in Santa Claus

Paul: We could get $5B for wall if we did this

Boy dies in US custody on Christmas Eve

Trump asks child if she believes in Santa Claus

John Avlon is a CNN senior political analyst and anchor. The opinions expressed in this commentary are his own. View more opinion articles on CNN.
(CNN)President Donald Trump ends his second year in office isolated and under siege. A self-inflicted government shutdown is happening over Christmas, the stock market is suffering its worst month in a decade (compounded by his talk of sacking the Fed chair) and the resignation of Defense Secretary James Mattis is sending shudders through America's military and allies.
There are at least 7,546 reasons to be concerned about Trump's presidency -- which is the number of lies or falsehoods the Washington Post has chronicled from the President to date. I'd add his impulse to divide rather than unite, his impulse to attack any independent check and balance that tries to hold him accountable (law enforcement, the courts, the press, science, etc.) and, well, his fact-free impulsiveness in general.
But these criticisms are for another day -- pretty much any other day. 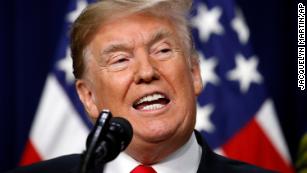 The Trump shutdown is fitting
Today is Christmas. And in a spirit of finding the best in people, I promised myself I'd look for a few areas of agreement with a President with whom I disagree quite a lot.
After all, if you view politics through a historical lens, you'll see that even our worst Presidents have some redeeming qualities. And if those can't be found personally, they can be found in policy.
Take President Richard Nixon -- the predecessor Trump constantly echoes. He's best known for Watergate and resigning in disgrace, but he actually had a pretty stellar first term. Nixon created the Environmental Protection Agency (whose mission is now undermined daily by President Trump), opened relations with China, ended the draft and wound down the Vietnam War -- all leading to a 49-state landslide re-election (which makes the Watergate conspiracy even more of a tragedy rooted in a dark character).
So what are the policy areas Trump deserves credit for, according to my admittedly subjective centrist compass? 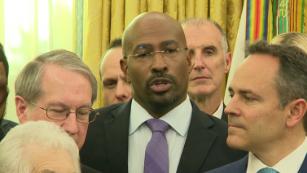 Van Jones pledges to work with Trump 01:58
President Trump got it done after decades of talk. He cobbled together a bipartisan coalition to pass the First Step Act and used his bully pulpit to push past a reluctant Senate Majority Leader Mitch McConnell, who had pronounced the legislation "divisive" just weeks before. As a measure of that alleged divisiveness, the legislation passed by an overwhelming 87-12 margin.
The law blends common sense and compassion, redeeming reformed lives while saving money in the process. It promises to lessen the sentences of nonviolent criminals and reduce frankly racist sentencing disparities. And it's the kind of bill that could only command Republican support if it were backed by a law-and-order candidate, which itself speaks to the stupid partisanship that usually outweighs policy.
It also offers a window into what might have been -- if Trump had decided to use his power with the base to pull a political judo move on policy, for example pushing for comprehensive immigration reform including a wall.

Getting tough on China 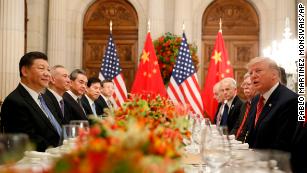 Trump is talking up his trade truce with China. The reality is far more unsettling
President Trump seems to have been duped by his passionate pen pal in North Korea (sanctions were working well before he "fell in love") but he's been clear-eyed and mostly consistent when it comes to standing up to China's exploitation of international systems to fuel its expansion while creating a technological surveillance state.
Team Trump has realized that time is running out to have any leverage on China in the effort to get it to act like a responsible global power. And while I don't support Trump's trade war tactics -- mostly because they have lumped in allies like Canada with China -- the President has been right to call out abuse of trade treaties by China that have created an unequal playing field on issues from manufacturing to intellectual property to massive state sponsored cyber theft. Past administrations' attempts to engage China have been mistaken for weakness by the Marxist Leninist regime.
Their geo-political power grab and continued attacks on civil rights and civil liberties offers a chilling vision of the 21st century that deserves an unflinching pushback in the name of freedom and human rights. That does not mean America and China need be enemies -- but it does mean there needs to be more mutual respect and less of an abuse of the international order. 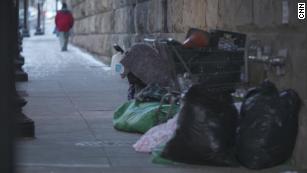 High-stakes race for tax breaks that could help low-income communities
The tax cut bill most often trumpeted as the prime achievement of the Trump era was actually a disaster. It stimulated an economy that was already overheated, promises to exacerbate the growing gap between the rich and poor (as well as the super-rich and middle class) and its failure to close corporate loopholes is already exploding our deficit and debt, reducing tax receipts in a booming economy.
The hangover from this party is going to be brutal. That said, there is an excellent and overdue provision in the otherwise lousy tax bill -- economic opportunity zones. Consider this the belated love child of Jack Kemp's dwindling influence in the Republican Party, incentivizing investment in poverty-stricken neighborhoods through tax breaks on capital gains. It's exactly the sort of smart, targeted government action that may finally spur development in our atrophied regional economies.
The devil is always in the details, and there is a potential for abuse -- namely a focus on relatively disadvantaged neighborhoods in otherwise rich cities, with Amazon's move into Long Island City in exchange for a boatload of tax breaks being a prime example.
But if other companies follow through with the intended spirit, investing in the rust belt in particular, opportunity zones could be an important catalyst toward rebuilding America's long-neglected inner cities.

This is a comparatively small step, but it radiates common sense and actually shows a rare libertarian streak. The "right-to-try" legislation had been embraced by a number of states, but the federal government had been opposed until Trump pushed the bill into enactment.
Basically, it allows terminally ill patients to have access to experimental drugs. The logic is simple: what do they have to lose? Why not give patients and their families access to whatever experimental drug they want if it might be able to save or prolong their life?
Yes, there is the potential for abuse and con artists scamming the terminally ill. But the opportunities for hope outweigh the potential for abuse, especially if paired with reasonable quality control. Sometimes it does take a disrupter to break through the bureaucratic logjam.

You wouldn't typically consider Orrin Hatch, R-Utah, the savior of rock n' roll musicians. He's more of a barbershop quartet kind of guy. But Hatch sponsored, and Trump signed, a worthwhile and overdue piece of legislation that stops musicians from getting screwed by streaming services and cuts down on the power of predatory middle men.
I still feel like bars shouldn't be stalked by ASCAP for playing music on the jukebox, but the musicians definitely deserved to get paid for their work -- whether they recorded it this year or fifty years ago when Woodstock reigned. (While Trump is apparently a Stones fan, he's always been more of a hardhat rather than a hippie kind of guy).
Stay up to date...
Sign up for our new newsletter.
Join us on Twitter and Facebook
There's more the Trump administration could do to bring about some reforms with bipartisan appeal in the new year. "Infrastructure week" has become a well-deserved punchline because of too many half-baked rollouts, but it remains the most obvious area of bipartisan agreement because it builds directly on the President's professional expertise. Democrats have backed it in the past but couldn't get Republican support because Barack Obama was President. Now, they can get that needed public-private infrastructure spending without politically owning all the cost (not that the GOP has any credibility left on deficits and debt).
There's a chance at more measurable progress on combating the opioid crisis, where Trump has the right instincts, but more pill mills still need to be crushed. There may be some opportunity to find constructive bipartisan purpose on reducing prescription drug costs as well, or so said Nancy Pelosi at the CNN Citizen Conference.
But maybe the ultimate silver lining in the dark and stormy Trump presidency is the way the President's actions have inspired a civic rebirth as citizens realize we can't take our democracy for granted.
As hard as it may be to believe, 2019 could make 2018 look tame. On the horizon are rocky markets and the Russia report, with an erratic President meeting real congressional checks and balances for the first time in his administration. But today is Christmas, so let's offer thanks for hardworking folks in government -- many working without pay today -- who try to do the people's business and advance the national interest no matter which party is in power or who happens to be president.
end quote from:
https://www.cnn.com/2018/12/25/opinions/critics-can-give-trump-credit-this-christmas-avlon/index.html
Posted by intuitivefred888 at 2:36 PM

Email ThisBlogThis!Share to TwitterShare to FacebookShare to Pinterest
Labels: Five things even Trump critics can give him credit for this Christmas