What you should know about hurricanes

How are hurricanes named?

What 'rapid intensification' means for storms

Hurricane Maria's wrath in the Caribbean

What you should know about hurricanes

How are hurricanes named?

What 'rapid intensification' means for storms

Hurricane Maria's wrath in the Caribbean

San Juan, Puerto Rico (CNN)Hurricane Maria pummeled Puerto Rico on Wednesday morning, ripping trees out of the ground and hammering two-thirds of the island with hurricane-force winds.
"This is total devastation," said Carlos Mercader, a spokesman for Puerto Rico's governor. "Puerto Rico, in terms of the infrastructure, will not be the same. ... This is something of historic proportions."
Maria has killed seven people on the Caribbean island nation of Dominica, said Gaston Browne, the Prime Minister of Antigua and Barbuda. Browne said he had been communicating with the Prime Minister of Dominica, Roosevelt Skerrit, whose own house was shredded by the storm.
Maria made landfall in Puerto Rico on Wednesday near the city of Yabucoa with winds of 155 mph, the National Hurricane Center said. By 10 a.m., those winds had weakened to 145 mph, but Maria was still a Category 4 hurricane capable of ripping roofs off houses.
The storm was so fierce, it broke two National Weather Service radars on the island.
Calls for rescue immediately started pouring in -- but to no avail.
"First responders cannot go out there," Mercader said, echoing the governor's earlier warning that emergency crews wouldn't go outside in winds stronger than 50 mph.
Maria was expected to cause widespread power outages across Puerto Rico. Shortly after landfall, the storm had wiped out power in the east coast city of Fajardo.
Thousands of Puerto Ricans heeded calls to go to emergency shelters. "As of 2:30 a.m. we count 10,059 refugees and 189 pets (in shelters)," the island's governor, Ricardo Rosselló, tweeted.
Maria became the first hurricane of Category 4 strength or higher in nearly 80 years to hit the US territory, home to 3.3 million people.
TRACK THE STORM
As residents hunkered down in homes and shelters ahead of the direct impact, others in the most vulnerable, low-lying, flood-prone areas were evacuated.
The Puerto Rico Convention Center in San Juan -- which was still housing Hurricane Irma evacuees from other Caribbean islands -- prepared to accept thousands more residents.

The storm was likely to be a record-breaking event, CNN meteorologist Derek Van Dam said. 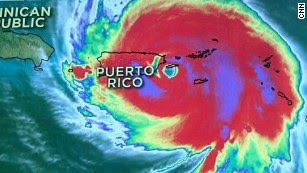 Puerto Rico had half as many people the last time it saw a hurricane this bad
"This could potentially be the strongest hurricane to ever reach the shores of Puerto Rico," he said from San Juan, Puerto Rico's capital.
"A lot of people remember or have heard of the storms that hit in 1928 and 1930. Well, guess what? This could pale those in comparison. ... It will go down in the record books."
Storm surges of 6 to 9 feet were expected.
"Hurricane Maria is really scraping the upper echelon of what's possible with hurricanes, (with) 175 mph sustained winds right around the center of the storm," Van Dam said Tuesday. 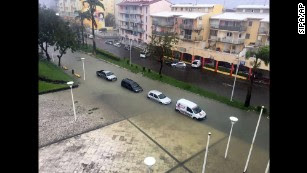 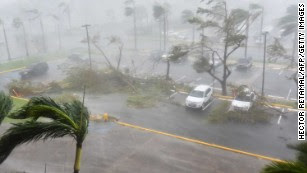 The island's mountainous terrain was likely to act like a barrier and squeeze a lot of moisture out of Maria, he said, producing as much as 2 feet of rain in some places. That could lead to flash flooding, which Rosselló stressed often is the top cause of death following a storm like this.
Local politicians warned of the storm's potential impact but also heralded the islanders' spirit.
"We are going to be hit hard," San Juan Mayor Carmen Yulin Cruz told CNN. "But we are blessed that we have what it takes to move and push on. We will make it, I bet you. I have no doubt, we're going to make it."

Residents in San Juan made sure to stock up ahead of the hurricane's arrival. A sign on one store shelf asked customers on Tuesday to limit themselves to two cases of water, but the supply had already run out by the time a CNN team arrived. The store still had food and other supplies.
At a gas station across the street, the attendant said the station ran out of regular gas Tuesday morning, then ran out of premium.
Shoppers hunting for essentials, such as ice, waited for hours to buy the commodity, which would be used to keep perishables cool during a power outage. 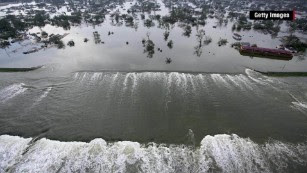 2017 Atlantic Hurricane Season Fast Facts
The government also had been "organizing" ahead of the storm, Rosselló told CNN's Anderson Cooper.
"We can get people out of harm's way -- flooding regions -- and make their way to safe shelters," he said. "What we're doing is making sure people can pass through, they can weather the storm."
"It's not going to be comfortable, but they're going to be safe. This is our key objective," he said. "We understand infrastructure is going to be devastated. We're going to have to rebuild. ... Lives are not replaceable, but infrastructure is."

Some tourists found themselves stranded on the island as flights, already overbooked and increasingly expensive, became unavailable.
Heather Farrell was on her honeymoon with her husband, Luke, after their September 9 wedding. The couple had tried to cut the trip short when it became apparent they were in Maria's firing line, she said. 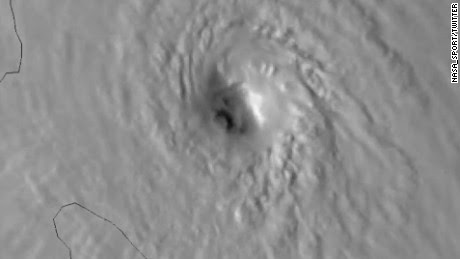 NASA watches Maria intensify from space 00:50
"We did try to get off, as early as Saturday, but all flights were either booked or canceled. We actually are on the ocean -- our room faces the ocean. It's pretty windy, but there is no rain. We'll stay inside for now," she said.
Hotel staff had asked all guests to head downstairs early Wednesday morning to take shelter in a safe room, Farrell said.
"I would rather be home than here, but I guess we're making the best of it," she said.
Nick Bailey, Brandon Edwards and John Michael Berndt -- three friends from northern California -- chose this week to vacation on the island. They were aware of Maria, which was only a tropical depression when they left California.
"Our hostel is taking good care of us," Berndt said, adding that staff there had boarded all the windows and created a concrete hurricane barrier. "We tried to take flights out last minute but that didn't work so we're going to ride through the storm."
"This is a good area, apparently," Bailey said. "It's close to hospitals and emergency centers."
The men also were moved to rooms deeper inside the hostel -- without any windows.

As Maria pushed through the Caribbean toward Puerto Rico, two people were missing after a boat sank off the coast of La Désirade, a small island near the mainland of Guadeloupe. About 80,000 people, or 40% of households on the island, were left without power, the government said. 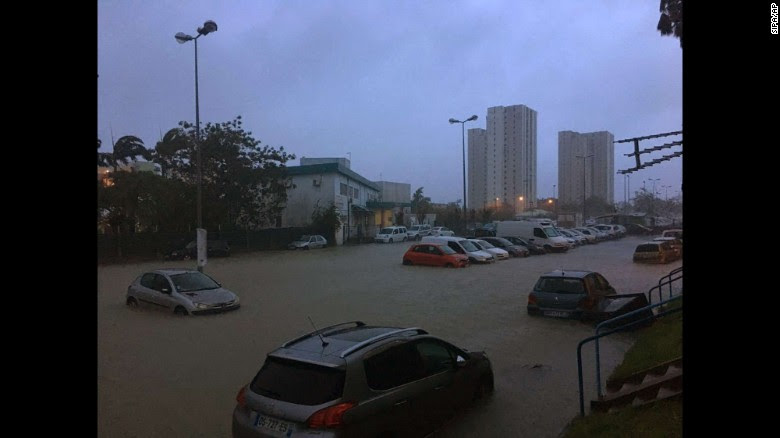 Hurricane Maria caused widespread flooding Tuesday in Point-A-Pitre, Guadeloupe.
The storm also caused "widespread devastation" in Dominica, the country's Prime Minister said Tuesday. Maria ripped off the roof of his own house and left much of the island -- population 73,000 -- in ruins.
In just 30 hours, Maria's intensity exploded from 65 mph on Sunday to 160 mph by Monday night, the National Hurricane Center said.
CNN's Brandon Miller, Nick Paton Walsh, Judson Jones and Leyla Santiago contributed to this report.
Posted by intuitivefred888 at 9:15 AM