There is a 10 part series on CNN about Viet nam

I was 13 when it sort of began with the CIA sort of how Afghanistan also began with the CIA too. Then it became 100 different messes none of which made any sense to me. Oh, I was brainwashed by the media about the "Domino Theory" but to kill 50,000 Americans based upon the Domino Theory which after all "WAS ONLY A THEORY AND NOT EVEN A LAW" seemed as insane then as it does now.

At the time in 1966 if my father hadn't insisted I file for a 4F I would have likely been drafted because like most 18 year olds in high school I was pretty clueless. So, without my father realizing I could be classified 4F because I had had Blunt Trauma childhood epilepsy from age 10 to 15 I could have died over there pretty easily or be one of those white haired bearded guys talking to themselves still walking down any street in the U.S. I was always sort of neutral about the Viet Nam War. In other words I heard both sides and they both were sort of crazy. But, my question was always "Why are you killing all my high school friends over there? (my age born in 1948 died more than any other age of young man in Viet Nam by the way so for me this is really personal because it was mostly my demographic my age that died over there because of a bunch of retarded old men who didn't know what the fuck was going on anyway drafted them and sent them all to die for nothing!

Nothing changed the U.S. while I was alive since 1948 more than the Viet Nam War and in many ways this was not a good change for us. The only thing that changed us more I believe in another way was AIDS which 35 million people have now died of.

People think 9-11 and the Great Recession has changed us a lot but it is nothing in comparison to the Viet Nam War and AIDS looking back now from my present perspective.

4F just meant I wouldn't be drafted until the mainland of the U.S. was attacked by Russia or China at that time. Otherwise I was free to go to college or whatever else I wanted to do.

All us boys were psychologically trained in Gym to be killers. We were abused a lot in Public school so we were prepared more to kill and die in wars then in the 1950s and early 1960s. Boys who were weak or Gay were killed a lot then during these times. They just disappeared then a lot. So, demonstrating you were not gay by physically defending yourself no matter what was a matter of personal survival then in public school. Guns were considered low class and were not used by teenage gangs, instead knives and clubs were used instead a lot especially in the 1940s, 1950s, and early 1960s.

Often young gay and black men if they were found on the streets by high school football players were killed on weekends secretly by High School football teams all over the U.S. Looking back now all these seems pretty insane but this was really how it was then.

www.cnn.com/2017/09/15/entertainment/vietnam-war-review/index.html
Sep 15, 2017 - 'The Vietnam War' paints masterpiece on vast canvas. ... (CNN)It goes without saying that Ken Burns' PBS documentaries will be big, classy and impeccably produced. ... "The Vietnam War" premieres Sept. 17 at 8 p.m. on PBS and will air Sunday through Thursday over successive weeks. 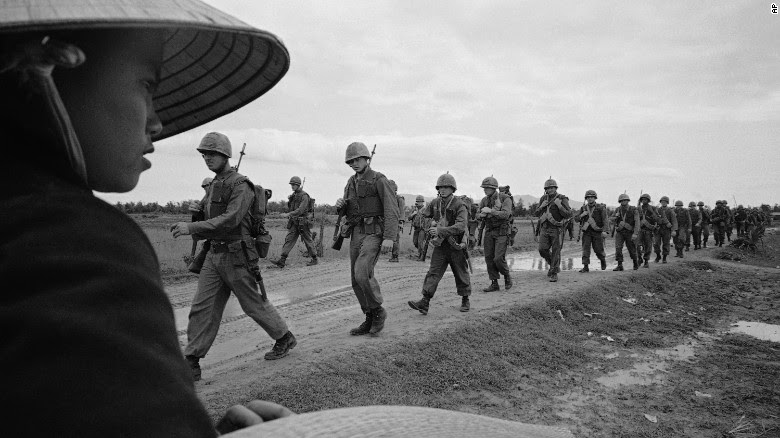 A Vietnamese woman watches U.S. Marines march toward defense positions in 1965. (AP Photo)
(CNN)It goes without saying that Ken Burns' PBS documentaries will be big, classy and impeccably produced. Yet in terms of relevance, "The Vietnam War" might be his most significant undertaking since "The Civil War" -- a 10-part, 18-hour look at the conflict and its repercussions -- political, cultural, psychological -- still being felt and litigated today.
PBS has again provided Burns with a huge canvas, and he has responded by painting a masterpiece, one that distinguishes public television at a moment when it yet again finds itself under siege and facing an existential challenge.
Almost overwhelming in its scope, this detailed history oscillates between the macro and micro, between individual stories of Americans and Vietnamese whose lives were caught in the war and policy makers who, as stated by narrator Peter Coyote, found it "easier to muddle through" than admit a failed policy.
Again working with co-director Lynn Novick and writer Geoffrey Ward, Burns explores key events at home and abroad -- the Tet offensive, the My Lai Massacre, Kent State, the fall of Saigon -- but also has the time to devote to individual battles and encounters that are less well known. All of this is punctuated by the politics of the war, augmented by recorded conversations of Presidents Johnson and Nixon painting a far rosier picture in public than they confessed to in private.
"I don't think it's worth fighting for, and I don't think we can get out," Johnson says, perhaps the signature line in the entire project, except perhaps for former Defense Dept. official Leslie Gelb's observation that Vietnam became "a piece on a strategic chessboard" whose particulars weren't understood by those in the U.S. government.
"The Vietnam War" opens by delving into the history of the region, including Vietnam's time under French rule and the rise of Ho Chi Minh.
" allowfullscreen>
Part two then segues to John F. Kennedy, who initiated the conflict, followed by Johnson, who escalated it despite his misgivings, haunted by the specter of Korea and the "domino theory" in the struggle to restrain Communism.
"The Vietnam War" also humanizes what was often a faceless enemy, interviewing former Viet Cong as well as civilians whose lives were turned upside down by the conflict.
What might be most sobering, however, are the ripples from the war still being felt today, from the rise of the anti-war movement to the shadows that have lingered over U.S. foreign policy. Indeed, as the documentary notes, Vietnam upended fundamental notions of patriotism, especially among those to whom the phrase "my country right or wrong" didn't make sense under the circumstances.
The war "began in secrecy," Coyote says near the outset. "It ended, 30 years later, in failure" -- leaving 58,000 Americans and millions of Vietnamese dead.
Not surprisingly, enormous attention has clearly been paid to the smallest details, including more than 100 songs that play in the background -- a veritable soundtrack of the 1960s and '70s, from The Animals' "We've Got to Get Out of This Place" as soldiers reminisce to Simon & Garfunkel's "Bridge Over Troubled Water" as people assemble at the Vietnam War memorial wall.
Those who lived through the period should find "The Vietnam War" a highly emotional experience. But even their kids and grandkids should hear and see echoes throughout this epic undertaking, which forges a bridge from America's past directly to its present.
"The Vietnam War" premieres Sept. 17 at 8 p.m. on PBS and will air Sunday through Thursday over successive weeks.
Posted by intuitivefred888 at 11:34 PM

Email ThisBlogThis!Share to TwitterShare to FacebookShare to Pinterest
Labels: There is a 10 part series on CNN about Viet nam