Avenatti: Trump shot himself in the foot

Rosenstein to Trump: You're not a target

Avenatti: Trump shot himself in the foot

Rosenstein to Trump: You're not a target 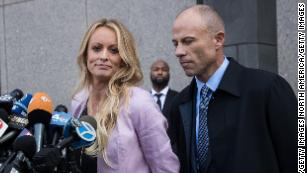 Judge wants to hear from Cohen before ruling on Daniels case
Cohen cited FBI raids of his residence, office and hotel room and the seizure of "various electronic devices and documents in my possession," in his filing in US District Court in Los Angeles.
"Based upon the advice of counsel, I will assert my Fifth Amendment rights in connection with all proceedings in this case due to the ongoing criminal investigation by the FBI and US Attorney for the Southern District of New York," Cohen said.
Cohen filed the declaration as part of an effort to have a civil lawsuit filed by Daniels put on hold. The judge in that case said last week that he needed to hear from Cohen directly before deciding on that request.
Michael Avenatti, Daniels' attorney, called Cohen's declaration "a stunning development."
close dialog
"Never before in our nation's history has the attorney for the sitting President invoked the 5th Amend in connection with issues surrounding the President," Avenatti tweeted. "It is esp. stunning seeing as MC served as the 'fixer' for Mr. Trump for over 10 yrs. #basta."
Avenatti told CNN that Cohen invoking the Fifth Amendment only strengthens their case against him.
"The fact finder -- whether it be a jury or a judge -- can find what is called a negative inference and what that means is that you can presume that if the witness answered the question instead of invoking his Fifth Amendment right that the answer would incriminate him that it would not be positive for him or her and that's a very serious matter," Avenatti said on CNN's "Erin Burnett OutFront."
The judge in the Los Angeles case, S. James Otero, is tasked with determining whether there is a substantial overlap between the FBI raids in New York and the civil case before him in which Daniels is seeking to void an agreement in which Cohen paid her $130,000 to remain silent about an alleged sexual encounter with Trump a decade before his presidency, in 2006. The White House has said Trump denies the affair.
Since Cohen and his lawyers are requesting the stay in the case, Otero said last week that the burden is on them to show a large overlap between the two matters.
The "conundrum," the judge said, is that "the scope and breadth of the criminal investigation remain a mystery.
Otero said in court last week that he was not privy to the affidavit for the New York searches, but that he'd reviewed the docket of proceedings in federal court in that jurisdiction.
He said "common sense" told him the decision to conduct a raid on an attorney for the President of the United States' lawyer signaled "a significant and serious matter."
"You're going to make sure that it's more than just a bare-bones case," Otero added. "It's probably substantially likely that there's some sort of criminal action to follow."
Cohen and his attorney, Brent Blakely, have argued that the Daniels civil case should ultimately be sent to private arbitration.
Posted by intuitivefred888 at 7:28 PM

Email ThisBlogThis!Share to TwitterShare to FacebookShare to Pinterest
Labels: Cohen to plead the Fifth in Stormy Daniels hush money case