Macron warns US Congress: There's no Planet B 02:49
(CNN)French President Emmanuel Macron said he believes US President Donald Trump will pull out of the Iran nuclear deal next month "for domestic reasons," describing the US as "insane" for its constant global policy U-turns, according to reports.
Macron's remarks appeared to be a concession that he may have failed to convince Trump to stay party to the agreement during his three-day visit to Washington.
Trump has repeatedly threatened to ditch the landmark deal, which obliges Iran to limit its nuclear program in exchange for the suspension of economic sanctions.
Trump has long criticized the agreement as being too soft on Iran, but has signed several waivers to continue the suspension of the sanctions during his time in office, keeping the deal alive. He has said more recently that he will refuse to sign the next round of waivers on May 12 unless the agreement is amended to take a tougher stance. 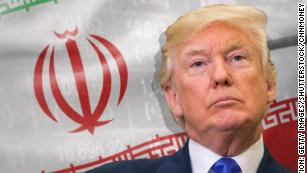 How the 'insane' Iranian nuclear deal might survive
"My view -- I don't know what your President will decide -- is that he will get rid of this deal on his own, for domestic reasons," Macron told US reporters in Washington on Wednesday, according to the Guardian.
close dialog
He said he did not have any specific inside information, but believed there was "a big risk" Trump would leave, according to CBS.
In reference to Trump having pulled the US from the Paris climate change agreement as well, Macron said changes in the US stance on several world issues might work in the short term but were "very insane in the medium to long term," the Guardian reported.
Trump used the same term to describe the Iran deal on Tuesday, speaking alongside Macron at a joint press conference.
"It's insane, it's ridiculous, it should haven ever been made. But we'll be talking about it," Trump said. "It was a terrible deal."
A US withdrawal would deal a blow to the other nations that helped broker it. Many had placed their hopes on the French leader to temper his American counterpart. Iran has also said it will not accept any alternative deal and threatened to resume nuclear activity should the current agreement be scrapped. 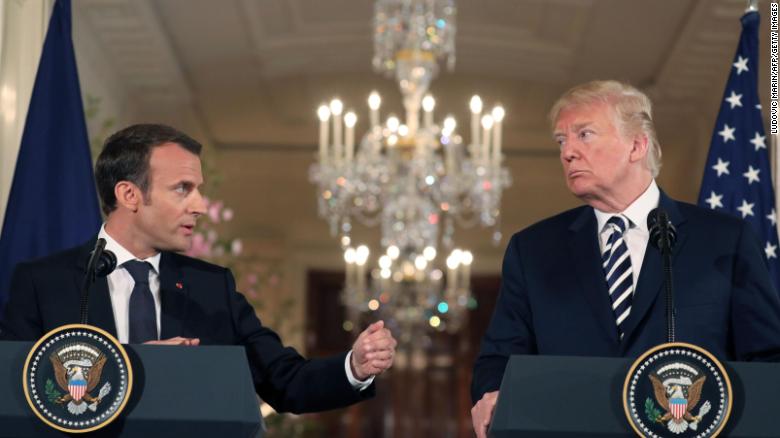 French President Emmanuel Macron, left, with US Presdient Donald Trump at the White House on Tuesday.
Macron has positioned himself as a negotiator between Europe and the US, and appears to have established an influential relationship with President Trump. His visit to the US this week has been a charm offensive peppered with handshakes and kisses between the two leaders to pronounce their warm relations.
But in an address to the US Congress on Wednesday, Macron appealed to the country's leaders to preserve the Iran deal and remain part of the global community, taking a clear jab at Trump's "America First" agenda. 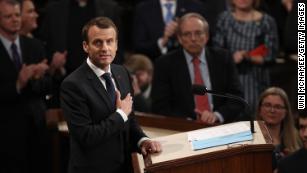 France's Macron takes aim at Trump agenda in pointed speech to Congress
He reaffirmed France's commitment to the Iran accord, reminding Congress that both his country and the United States had signed it. "That is why we cannot say we should get rid of it like that," he said.
Trump has criticized the current agreement for failing to address Iran's ballistic missile program or its role in the Syrian conflict. European leaders have sought to address those issues separately.
Macron earlier this week said there was no plan B for the Iran agreement, but on Tuesday he indicated there may be room for a new deal to curb Iran's regional ambitions and ballistic missiles program that would run alongside the existing nuclear pact.
Trump said he would pull the US out of the deal during his election campaign, but in January he ramped up pressure on his European allies to "fix the terrible flaws" of the deal by May 12 or he would withdraw.
"My commitment, my action is not to try to convince President Trump to walk away from his campaign's commitments or to change his mind. I'm not a masochist," Macron said Wednesday at a press conference in Washington. "I believe that what we should be doing is to try to find an efficient way to build this genuine multilateralism."

In his speech to Congress, Macron pushed the US to consider rejoining the Paris climate change agreement, which Trump announced his country would leave last year. 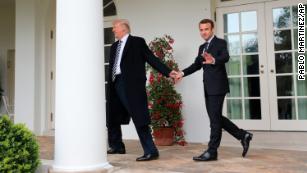 After the hugs and kisses, Macron rips Trumpism
He gave an impassioned speech in which he reminded Congress that the US "invented this multilateralism" and now needed to help preserve it.
"We can choose isolationism, withdrawal and nationalism. This is an option. It can be tempting to us as a temporary remedy to our fears," Macron said.
"But closing the door to the world will not stop the evolution of the world. It will not douse, but inflame the fears of our citizens."
He also warned against the growing strongman-style of leadership seen in several parts of the world.
"Personally, if you ask me, I do not share the fascination for new strong powers, the abandonment of freedom and the illusion of nationalism."
CNN's Stephen Collinson, Kevin Liptak and Laura Smith-Spark contributed to this report.
Posted by intuitivefred888 at 6:57 AM