US B-52s fly between two of China's man-made islands

President Obama: 'Sovereignty should be respected'

US destroyer sails near China-claimed island

Why it's so tense in the South China Sea

Can China help the US deal with North Korea?

President Obama: 'Sovereignty should be respected'

US destroyer sails near China-claimed island

Why it's so tense in the South China Sea

Can China help the US deal with North Korea?

Washington (CNN)US Air Force B-52 Stratofortress bombers flew a training mission over the South China Sea on Tuesday, according to the US military.
The bombers took off from Andersen Air Force Base on the island of Guam according to a statement from US Pacific Air Forces, which oversees air operations in the region. The flight also involved additional training with F-15 Strike Eagle jets in the vicinity of Okinawa, Japan. The training mission was part of the US Air Force's routine "Continuous Bomber Presence" in the region.
A US military official told CNN that the two bombers flew between two Chinese claimed features in the Spratly Islands, claims unrecognized by China's neighbors and the US government. China has used these geographic features in the Spratlys to build man-made islands, some of which China has equipped with military facilities. 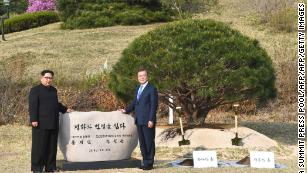 North and South Korea vow to end the Korean War in historic accord
Officials told CNN that the Chinese military did not intercept the US aircraft during their mission.
The US has expressed concerns about China's efforts to militarize the region via the construction of military facilities on some of these man made islands.
close dialog
Asked about the purpose of these islands, the Trump administration's nominee to head the US military's Pacific Command, Adm. Phillip Davidson told Congress this month that China was using these islands to exercise control over the South China Sea.
"China has long claimed the South China Sea as their own," he said. "It is my belief that they intend to establish the military structure that will help them control the air and sea lanes through that region of the world."
Speaking at the same Armed Services Committee hearing, Republican Sen. James Inhofe said China is "creating islands out there, all of them being singularly for military purposes."
"We know they have runways, they have cannons, they have -- everything in there is military. And it's really pretty scary," Inhofe added.
Posted by intuitivefred888 at 1:32 PM

Email ThisBlogThis!Share to TwitterShare to FacebookShare to Pinterest
Labels: US flies bombers over South China Sea