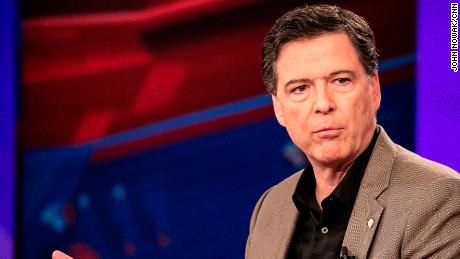 In a CNN town hall, the former FBI director defends releasing his memos detailing conversations with the President and says it was legal

Washington (CNN)James Comey defended releasing his memos detailing his conversations with President Donald Trump Wednesday in a CNN town hall, adding that he doesn't believe he broke the law.
"I don't, but that won't surprise you," he said when asked whether there's any credence to Trump's claim that Comey releasing the memos broke the law.
"I don't," Comey added. "In fact, I think he's just making stuff up."
The live town hall hosted by CNN's Anderson Cooper on Wednesday comes amid the former FBI director's media blitz to promote his new book and a series of high-profile clashes with Trump.
"The details matter because the facts matter, and should matter even to the President," Comey explained, adding that he had chosen to classify some memos but not all of them. "Some of those memos I decided should be classified. Four others, I wrote them and was highly confident they should not be classified. Those four I kept a copy at the FBI and a copy at my personal safe at home."
close dialog
Comey confirmed CNN's reporting last week that he had shared the memos with additional close associates, outside of the FBI -- telling Cooper that he had shared the memos with his legal team after he was fired.
"After I was fired, I put together a legal team of three people," Comey said. "One of whom was professor Dan Richman at Columbia University. After I had asked him to give this information to the media, I separately gave my legal team four memos, which were unclassified."
Some close associates of Comey have been questioned by the inspector general's office about precisely which memo or memos they saw and when Comey shared them, sources told CNN.
The event took place less than a week after the Justice Department provided Congress with memos Comey wrote documenting his interactions with Trump. The President seized on the release of information to attack Comey, claiming that the memos were classified and belong to the government.
The hour-long town hall was held at William & Mary, Comey's alma mater, in Williamsburg, Virginia. The Student Assembly at William & Mary co-hosted the event. During the event, Comey weighed in on a wide range of topics, including his interactions with Trump, the President's penchant for nicknames and his handling of the investigation into Hillary Clinton's private email server.

'It's always significant when someone lies to you'

At one point, Cooper asked Comey about how he wrote in his memos that Trump told him he did not stay overnight in Moscow around the time of the Miss Universe pageant in 2013.
CNN reported shortly before Trump took office that top intelligence officials, including Comey, presented Trump with claims of Russian efforts to compromise him. BuzzFeed News published the full, unverified dossier that included the infamous claim that Russian authorities had evidence of Trump watching prostitutes urinate in a hotel suite.
There is no indication that such a tape exists, and Trump has denied it.
Cooper asked Comey, "Since then, flight records, social media posts, congressional testimony, also photographs prove that he actually did spend the night in Moscow. Do you think it's significant that the President lied to you twice?"
"It's always significant when someone lies to you, especially about something you're not asking about. It tends to reflect a consciousness of guilt," Comey said. "I don't know what was in his head. I don't know whether he was intentionally misstating a fact to me."

Choice on Clinton email case between 'bad' and 'catastrophic'

Weeks before the 2016 presidential election, Comey informed Congress that the FBI was reviewing additional emails in connection with the investigation into Hillary Clinton's use of a private email server. That announcement came after Comey had previously announced that he would not recommend charges against Clinton as a result of the private server.
Comey described the situation over whether to reveal that he was re-opening the investigation as a choice between "bad" and "catastrophic."
"No matter where the polls are, you're going to have to always choose bad, and know you're going to get hammered for it, but know you had two choices and you chose the least bad," Comey said.
Comey announced, just ahead of the election, that the newly-discovered emails did not change the previous conclusion that Clinton should not face charges.
But Clinton and her allies have argued the sequence of events may have cost the Democratic presidential nominee the election.

When Comey was asked during the town hall what his nickname is for Trump, he said he doesn't have one.
"Honestly, I call him the President of the United States because I respect the office," Comey said.
Trump has previously called Comey, "Slippery James Comey,"an "untruthful slime ball" and a "LEAKER & LIAR."

There is no 'deep state'

"I hear this term 'deep state' all the time," Comey said. "There is no 'deep state.'"
"There is a deep culture and a commitment to the rule of law and equal protection of the laws, the fundamental values that are at the core of our Constitution that runs really deep in the FBI, the Justice Department as a whole, the intelligence community, the United States military services," he said. "It is the ballast that gives me comfort, and I hope should give all Americans comfort."

Trump and Comey have traded barbs in recent weeks after the former FBI director, who Trump abruptly fired last year, re-emerged on the national stage earlier this month as part of a publicity tour for his book, "A Higher Loyalty."
During the media blitz, Comey has called Trump "morally unfit" to be President and said that "it's possible" that the Russians could have compromising information that could be used against him. Comey acknowledged in an interview with CNN's Jake Tapper last week, however, that he has not seen any evidence that would prove the President is compromised by Russia.
Trump and his allies, meanwhile, have painted Comey as an untrustworthy source of information who lacks credibility. The President has also tried to use the newly-released Comey memos to discredit the special counsel probe into Russian interference in the 2016 election, which Trump has repeatedly referred to as a "witch hunt."
Over the weekend, Trump tweeted, "James Comey illegally leaked classified documents to the press in order to generate a Special Council? Therefore, the Special council was established based on an illegal act? Really, does everybody know what that means?"
CNN has previously reported that the Justice Department inspector general is reviewing Comey's handling of the memos.

Email ThisBlogThis!Share to TwitterShare to FacebookShare to Pinterest
Labels: Comey: Trump is 'just making stuff up'