If you click on the word button in the next line you likely will get the most updated version of the Nepal Tragedy on a daily or weekly basis depending upon what volunteers are available to compile reporting worldwide:
2015 Nepal earthquake

From Wikipedia, the free encyclopedia
The 2015 Nepal earthquake was a magnitude 7.8 (Mw) earthquake that occurred at 11:56 NST (6:11:26 UTC) on Saturday 25 April 2015, with the epicenter approximately 29 km (18 mi) east-southeast of Lamjung, Nepal, and the hypocenter at a depth of approximately 15 km (9.3 mi).[1] It is the most powerful earthquake to have hit Nepal since the 1934 Nepal–Bihar earthquake. At least 1,523 people are known to have died as a result of the earthquake with casualties reported in Nepal and adjoining areas of India, China, and Bangladesh. Centuries-old buildings were destroyed in the UNESCO World Heritage sites in the Kathmandu Valley, including some at Kathmandu Durbar Square.

Nepal lies towards the southern limit of the diffuse collisional boundary where the Indian Plate underthrusts the Eurasian Plate.[4] The convergence rate between the plates in central Nepal is about 45 mm (1.8 in) per year. The location, magnitude and focal mechanism of the earthquake suggest that it was caused by a slip along the Main Frontal Thrust.[1] The earthquake's effects were amplified in Kathmandu as it is sited on the Kathmandu Basin, which contains up to 600 m (2,000 ft) of sedimentary rocks, representing the infilling of a lake.[5]

Map of the earthquake and its aftershocks
The earthquake occurred on 25 April 2015 at 11:56 NST (6:11:26 UTC) at a depth of approximately 15 km (9.3 mi), with its epicenter approximately 34 km (21 mi) east-southeast of Lamjung, Nepal, lasting approximately twenty seconds.[6]
The earthquake was initially reported as 7.5 Mw by the United States Geological Survey (USGS) before it was quickly upgraded to 7.9 Mw and finally downgraded to 7.8 Mw. The China Earthquake Networks Center (CENC) reported the earthquake's magnitude to be 8.1 Mw. The India Meteorological Department said two powerful quakes were registered in Nepal at 06:11 UTC and 06:45 UTC. The first quake measured 7.9 points on the open-ended Richter scale and its epicenter was identified at a distance of 80 km to the northwest of the capital Kathmandu. The second earthquake was somewhat less powerful at 6.6 points on the Richter scale. The seismic focus lay at a depth of 10 km (6.2 mi) below the earth's surface. Bharatpur was the nearest major city to the earthquake, 53 km (33 mi) from the epicenter; this second earthquake occurred 81 km (50 mi) northwest of Kathmandu, the capital of Nepal. Over twenty eight aftershocks of magnitude 4.5 Mw or greater occurred following the initial earthquake, including one of magnitude 6.6 Mw, which occurred a few minutes after the earthquake.[7] 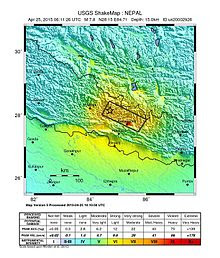 According to the "Did You Feel It?" ("DYFI") responses on the USGS website, the intensity in Kathmandu was IX (Violent).[1] Tremors were felt in the neighboring Indian states of Bihar, Uttar Pradesh, Assam, West Bengal, Sikkim, Uttarakhand, Odisha, northern Andhra Pradesh,[8] and in the Indian capital New Delhi. Minor cracks in the walls of houses were reported in Odisha. Minor quakes were registered as far as Kochi in Kerala state. The intensity in Patna was V (Moderate).[9] The intensity was IV (Light) in Dhaka, Bangladesh, according to the "DYFI" responses on the USGS site.[1] The earthquake was also experienced in the Tibet Autonomous Region of China,[10] Pakistan,[11] and Bhutan.[1]

There were at least 1,523 dead and more than 500 injured. At least 1457 died in Nepal while 52 died and over 200 were injured in the Indian states of Uttar Pradesh and Bihar, 12 died in Tibet and 2 died in Bangladesh.[12][13][14][11]
The earthquake triggered an avalanche on Mount Everest, killing at least 13 people at South Base Camp;[16] an Indian Army mountaineering team reportedly recovered 18 bodies.[17] Google engineer Dan Fredinburg, climbing with three other company employees and documenting the trek on social media, was among the casualties.[15] From 700 to more than 1,000 people were thought to be on the mountain at the time, with at least 30 injured and an unknown number missing or trapped at higher altitudes.[16][17][18][19] A helicopter rescue operation was set to begin Sunday morning, April 26.[20] Mount Everest is approximately 220 kilometres (140 mi) east of the epicentre.
Buildings in the UNESCO World Heritage Site of Kathmandu Durbar Square reportedly collapsed,[6] as did the Dharahara tower, built in 1832, killing at least 180 people,[21][22][23][24] and Manakamana Temple located in Gorkha. The northern side of Janaki Mandir and Patan Durbar Square has been reported to be damaged.[25] All international air traffic has been cancelled but there were no reported deaths at Tribhuvan International Airport.

As a rapid response Facebook launched and tested their newest application feature on Facebook called Facebook Safety Check. Nepalese people used this feature to the most and informed about their status by using this application. 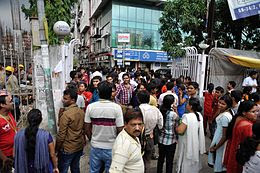 Buildings were evacuated in Kolkata, India