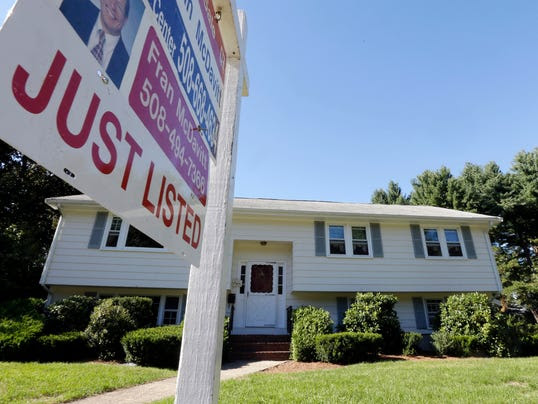 SHARE 53 CONNECT 21 TWEET 1 COMMENTEMAILMORE
WASHINGTON — Average U.S. rates on fixed mortgages fell for the second straight week and are at their lowest levels in four months.
Mortgage buyer Freddie Mac said Thursday that the average rate on the 30-year loan declined to 4.10% from 4.13% last week. The average on the 15-year fixed loan eased to 3.20% from 3.24%.
Rates have been falling since September when the Federal Reserve surprised investors by continuing to buy $85 billion a month in bonds. The purchases are intended to keep long-term interest rates low.
Rates had spiked over the summer when the Fed indicated it might reduce those purchases later this year. But hiring has slowed since then. Many now expect the Fed won't taper until next year.
The average on the 30-year loan has now fallen about half a percentage point since a hitting two-year high over the summer. The lower rates appear to be sparking a surge in activity by prospective homebuyers and homeowners looking to refinance.
Mortgage applications jumped 6.4% in the week ended Oct. 25 from the previous week, according to the Mortgage Bankers Association. Applications for purchases rose 2% from a week earlier, while refinance applications soared nearly 9%.
U.S. home prices rose in August from a year earlier at the fastest pace since February 2006, according to the latest Standard & Poor's/Case-Shiller 20-city home price index. But the price gains slowed in many cities from July, a sign that the spike in prices over the past year may have peaked.
To calculate average mortgage rates, Freddie Mac surveys lenders across the country on Monday through Wednesday each week. The average doesn't include extra fees, known as points, which most borrowers must pay to get the lowest rates. One point equals 1% of the loan amount.
The average fee for a 30-year mortgage declined to 0.7 point from 0.8 point. The fee for a 15-year loan rose to 0.7 point from 0.6 point.
The average rate on a one-year adjustable-rate mortgage increased to 2.64% from 2.60%. The fee eased to 0.4 point from 0.5 point.
The average rate on a five-year adjustable mortgage dipped to 2.96% from 3.00%. The fee was unchanged at 0.4 point.
end quote from:

Email ThisBlogThis!Share to TwitterShare to FacebookShare to Pinterest
Labels: Average rate on 30-year mortgage at 4.1%