Tesla Model S: vehicle of choice for many of wealthiest zip codes in U.S.

Recently, I saw a headline from a Forbes article that said "Silicon Valley Dominates 2013 List of America's Most Expensive ZIP Codes." This is always an interesting list Forbes publishes that indicates where old (and new) money is thriving in the U.S. Silicon Valley is clearly where it's at in 2013, as the list reads like a flashback to a pre-bust Y2K.

I was curious how this wealth affected Tesla Model S ownership, as that car has become the undisputed darling of the Silicon Valley set. What I found was surprising - I expected to see good numbers in California but I wasn't expecting to see double-digit market share in several wealthy West Coast areas.

New Yorkers don't share the same love for Elon Musk's company as Californians do (having a single-occupant carpool lane sticker is pretty sweet) so I was curious to look at market share farther down the Forbes list in expensive California zip codes beyond the top 25.

The results? A strong showing throughout the Golden State.

Newport Beach 92662's registration share looks pathetic on this list at a meager 1.4% but it is still 893% higher than the national (retail) average of 0.1%. Of course, the average house in America is significantly less than the cool $3.2M median found in 92662. That said, it's not as if Tesla is the most expensive car in America. In fact, there are several more extravagantly priced new cars on the market. Shouldn't they be more popular among people buying multimillion-dollar homes?

In most cases, the answer is "no." The Tesla Model S is the most registered vehicle in 2013 in 8 of the 25 most expensive zip codes in the US. That's pretty remarkable. More so, it takes the #1 spot in more top 25 zip codes than any other vehicle.

Why is any of this important?

Influential people set trends while the mainstream aspires to follow. We've seen this countless times in many different retail sectors. Cars are no different, albeit more expensive than most other purchases. Additionally, with the proclivity of tech geek being chic, the Silicon Valley area will set trends faster than traditional high-income markets like New York that have roots in (highly vilified) banking. While Millennials were protesting against and occupying Wall Street, Silicon Valley remains a land of post-recession opportunity.

So, as Tesla increases the number of models on offer and price points, it could find itself in demand by more than just those in these wealthy enclaves. After all, most luxury car companies find the most volume in their entry-level vehicles.

Next time, we'll dive further into the customer profile and look beyond these wealthy buyers, and try to determine if Tesla's demographics are setting it up for great success or if there is a chink in its armor that could lead to an unfortunate demise. 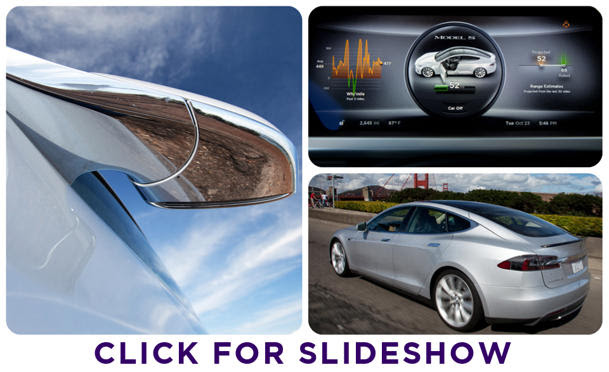 Part of this is the zero to 60 at an unbelievable rate and the same with zero to 100. Also, you could stack 9 of these on top of each other's roofs without collapsing the bottom one's roof. This is literally the safest car ever made. So, the combination of a plug in electric with zero to 60 that is amazing combined with being the safest and presently most stylish car in the U.S. makes it what it is.

Email ThisBlogThis!Share to TwitterShare to FacebookShare to Pinterest
Labels: Tesla Model S: vehicle of choice for many of wealthiest zip codes in U.S.