The Law of Accelerating Returns?

Kurzweil's analysis of history concludes that technological progress follows a pattern of exponential growth, following what he calls the "Law of Accelerating Returns". Whenever technology approaches a barrier, Kurzweil writes, new technologies will surmount it. He predicts paradigm shifts will become increasingly common, leading to "technological change so rapid and profound it represents a rupture in the fabric of human history".
end quote from:

In his 1999 book The Age of Spiritual Machines Kurzweil proposed "The Law of Accelerating Returns", according to which the rate of change in a wide variety of evolutionary systems (including but not limited to the growth of technologies) tends to increase exponentially.[7] He gave further focus to this issue in a 2001 essay entitled "The Law of Accelerating Returns"[8] which argued for extending Moore's Law to describe exponential growth of diverse forms of technological progress. Whenever a technology approaches some kind of a barrier, according to Kurzweil, a new technology will be invented to allow us to cross that barrier. He cites numerous past examples of this to substantiate his assertions. He predicts that such paradigm shifts have and will continue to become increasingly common, leading to "technological change so rapid and profound it represents a rupture in the fabric of human history." He believes the Law of Accelerating Returns implies that a technological singularity will occur before the end of the 21st century, around 2045. The essay begins:


An analysis of the history of technology shows that technological change is exponential, contrary to the common-sense 'intuitive linear' view. So we won't experience 100 years of progress in the 21st century—it will be more like 20,000 years of progress (at today's rate). The 'returns,' such as chip speed and cost-effectiveness, also increase exponentially. There's even exponential growth in the rate of exponential growth. Within a few decades, machine intelligence will surpass human intelligence, leading to the Singularity—technological change so rapid and profound it represents a rupture in the fabric of human history. The implications include the merger of biological and nonbiological intelligence, immortal software-based humans, and ultra-high levels of intelligence that expand outward in the universe at the speed of light. 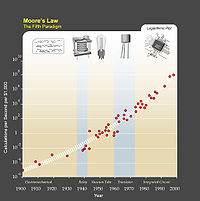 Moore's Law expanded to other technologies
The Law of Accelerating Returns has in many ways altered public perception of Moore's law. It is a common (but mistaken) belief that Moore's law makes predictions regarding all forms of technology,[citation needed] when really it only concerns semiconductor circuits. Many futurists[who?] still use the term "Moore's law" to describe ideas like those put forth by Kurzweil and others.
According to Kurzweil, since the beginning of evolution, more complex life forms have been evolving exponentially faster, with shorter and shorter intervals between the emergence of radically new life forms, such as human beings, who have the capacity to engineer (intentionally to design with efficiency) a new trait which replaces relatively blind evolutionary mechanisms of selection for efficiency. By extension, the rate of technical progress amongst humans has also been exponentially increasing, as we discover more effective ways to do things, we also discover more effective ways to learn, i.e. language, numbers, written language, philosophy, scientific method, instruments of observation, tallying devices, mechanical calculators, computers, each of these major advances in our ability to account for information occur increasingly close together. Already within the past sixty years, life in the industrialized world has changed almost beyond recognition except for living memories from the first half of the 20th century. This pattern will culminate in unimaginable technological progress in the 21st century, leading to a singularity. Kurzweil elaborates on his views in his books The Age of Spiritual Machines and The Singularity Is Near.

Email ThisBlogThis!Share to TwitterShare to FacebookShare to Pinterest
Labels: The Law of Accelerating Returns?