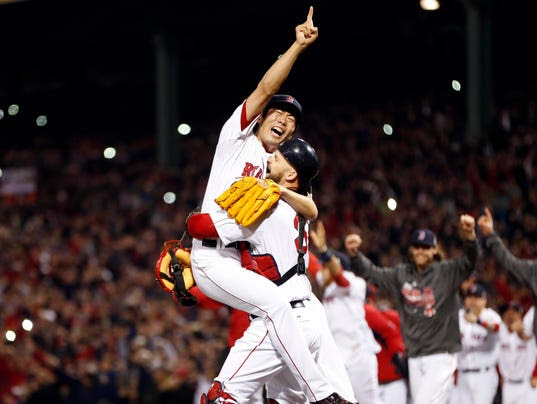 SHARE 1852 CONNECT 247 TWEET 21 COMMENTEMAILMORE
BOSTON -- The Boston Red Sox brought unadulterated joy back to their city Wednesday.
The Red Sox, for the first time since 1918, won the World Series
in front of their fans, pounding the St. Louis Cardinals 6-1 in front of a raucous sellout crowd of 38,477 at Fenway Park.
It is the Red Sox's third World Series championship in the last 10 years, but perhaps no title has ever meant more to this city.
At last, they were able to witness the beloved 2013 World Series championship with their own eyes.
Strangers hugged and squeezed one another in the stands. They danced along the aisles. They cheered until their lungs burned.
And, yes, there were tears.
Tears of joy. Tears of elation. Tears of memories from that horrific April 15 afternoon when two bomb blasts brought this city to its knees.
Through a surprising worst-to-first campaign, the Red Sox helped provide the people of Boston some measure of joy, and, on this gorgeous autumn evening, gave them a championship to forever remember.
Boston Strong.
"Something happened to this city," second baseman Dustin Pedroia said, "and we wanted to do something to make them happy and proud."
BOX SCORE: Red Sox 6, Cardinals 1
That desire dates to April 15.
"If there was a moment in time that galvanized us, it was the marathon bombing," manager John Farrell said. "We took it upon ourselves to have a positive impact on a city and the individuals suffering.
"They get we represent something significant. We knew this group had a chance to do something special."
This isn't their most talented team of the last 10 years. There are no Cy Young or MVP candidates. No one won more than 15 games. Not a single player hit more than 30 homers.
"We didn't have as much talent as 2007 and 2004," said Series MVP David Ortiz, "but we had guys who stayed focus and did the little things and that was special. It's tougher to win with a team like this than the teams we had in '07 and '04."
Yet, this team plaeyd with great purpose, believing it was destiny they would win the World Series.
BOSTON: Did the little things to win big prize
"The story was already written," Red Sox left fielder Jonny Gomes maintained all season. "We're just playing it out."
It was only fitting that the final chapter was laid out Wednesday for all of their fans to see.
It was fitting that John Lackey, the man once reviled in this city for his past struggles, was the one getting a standing ovation, tipping his cap to the fans after handing over a 6-1 lead to this bullpen in the seventh inning.
And it was only fitting that Ortiz, the man who delivered the most striking words in this city's time of healing and gave a pep talk in the middle of Game 4, carried the team on his back with his .688 batting average, making him the overwhelming choice for Series MVP.

Your browser does not support iframes.
"Nobody expected this," Ortiz said, "but we never stopped believing."
And yes, he reiterated his legendary words Wednesday: "This is our (expletive) city."
Oh, and how this was their night, one that will be cherished forever.
"We wanted to get back to what Boston is known for," Farrell said. "In our minds, you associate winning with the city of Boston. It's exceeded anything I've experienced."
Boston Strong.
Follow Nightengale on Twitter: @BNightengale
GALLERY: GAME 6
end quote from: