Restrictions were set to take effect Tuesday, but rules upheld on pregnancy-ending drugs. 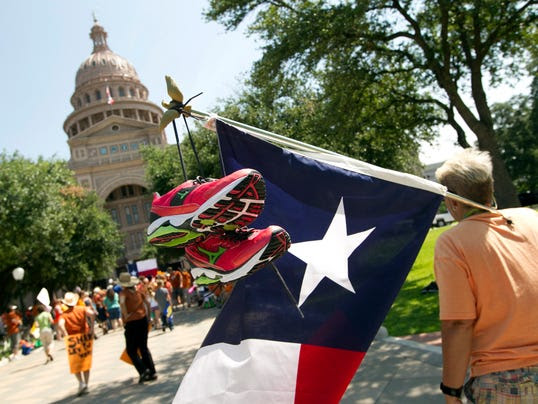 (Photo: Jay Janner, Statesman.com via AP)
SHARE 1631 CONNECT 127 TWEET 210 COMMENTEMAILMORE
A federal judge has struck down strict limits on abortion in Texas that were to take effect Tuesday but upheld provisions governing use of pregnancy-ending drugs.
District Judge Lee Yeakel declared that two changes to the state's health and safety code, passed during a special legislative session this summer, unconstitutionally restricted women's access to abortion clinics and infringed on doctors' rights to act in their patients' best interests.
In a 26-page opinion, Yeakel also blocked a provision requiring physicians to strictly follow follow U.S. Food and Drug Administration protocols when prescribing "off-label" doses of pregnancy-ending drugs, limiting their treatment options. He called the lawmakers' action "an undue burden on those women for whom surgical abortion is, in the sound medical opinion of their treating physician, a significant health risk."
The judge also struck down the statue that required doctors to have admitting privileges at a hospital within 30 miles of an abortion clinic, which opponents said would force 13 of the state's 32 clinics to close.
"The admitting-privileges provision of House Bill 2 does not bear a rational relationship to the legitimate right of the state in preserving and promoting fetal life or a woman's health and, in any event, places a substantial obstacle in the path of a woman seeking an abortion of a nonviable fetus and is thus an undue burden to her," he wrote.
Regarding so-called medication abortion, Yeakel ordered that one provision "may not be enforced against any physician who determines, in appropriate medical judgment, to perform the medication-abortion using off-label protocol for the preservation of the life or health of the mother."
But the judge upheld as constitutional other FDA-required procedures, which require additional doses and doctor visits, even though they are "assuredly more imposing and unpleasant for the woman."
Texas Attorney General Greg Abbott is expected to appeal to the U.S. 5th Circuit Courts of Appeals in New Orleans, which would rule on the merits of the law.
Democratic state Sen. Wendy Davis shot to national attention when she filibustered against the measure for nearly 13 hours in June, leading to its defeat at the close of the special legislative session. The Republican-controlled Legislature passed the measure in July after Gov. Rick Perry call a second special legislative session.
Perry later signed the bill into law, which was challenged last month in a lawsuit filed by Planned Parenthood, the Center for Reproductive Rights and the American Civil Liberties Union.
"Today's ruling marks an important victory for Texas women and sends a clear message to lawmakers: it is unconstitutional for politicians to pass laws that take personal, private decisions away from women and their doctors," said Cecile Richards, president of Planned Parenthood Federation of America. "While this ruling protects access to safe and legal abortion for women in many parts of the state, part of this ruling will make it impossible for many women to access medication abortion, which is safe and effective early in pregnancy."
Perry, meanwhile, said In a statement that the Yeakel ruling "will not stop our ongoing efforts to protect life and ensure the women of our state aren't exposed to any more of the abortion-mill horror stories that have made headlines recently."
"We will continue fighting to implement the laws passed by the duly-elected officials of our state, laws that reflect the will and values of Texans," he said.
A federal judge blocked similar restrictions that Mississippi lawmakers passed last year. A trial is set to begin in March.
Elizabeth Nash, policy analyst with the Guttmacher Institute, a New York-based policy and research center that advocates reproductive health rights for women, said the ruling was not a clear victory for either side.
With such policies as restrictions on late-term abortions and mandatory ultrasounds already in the books, Texas ranks as one of the top 10 states in the USA on abortion restrictions, Nash said. Eight other states have laws requiring abortion providers to have admitting privileges at hospitals, with three of those tied up in court challenges, she said.
But Texas' size make it one of the most important states in the country in the abortion rights fight, she said.
"In general, Texas is one of the states that people think about when they think about abortion restrictions," Nash said. "It has pretty much every abortion restriction you can name."
Since 2011, she added, there have been 203 abortion restrictions enacted in 30 states, compared with 212 between 2001 and 2010.
end quote from: