WASHINGTON - A key senator said Monday the National Security Agency has stopped gathering intelligence on allied political leaders, a practice that has drawn global criticism.
US denies German media claims that Barack Obama knew NSA was spying on ...
Spying flap: US ducks for cover from European anger, shields Obama with 'he ...
Europe Mulls Sanctions Against US Over Spying
Spain summons U.S. ambassador over spying 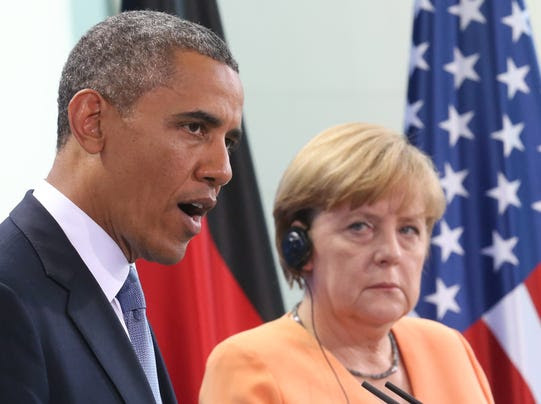 SHARE 79 CONNECT 47 TWEET 18 COMMENTEMAILMORE
WASHINGTON — A key senator said Monday the National Security Agency has stopped gathering intelligence on allied political leaders, a practice that has drawn global criticism.
"The White House has informed me that collection on our allies will not continue, which I support," said Sen. Dianne Feinstein, D-Calif., who chairs the Senate Intelligence Committee and is an NSA supporter.
Feinstein also criticized President Obama over reports he only recently learned about the monitoring that included German Chancellor Angela Merkel.
"It is my understanding that President Obama was not aware Chancellor Merkel's communications were being collected since 2002," she said. "That is a big problem."
As a growing chorus of nations protest U.S. surveillance policies, Obama's spokesman said Monday that an ongoing review will address the concerns of allies.
The review of NSA programs is designed to insure that intelligence gathering protects "both the security of our citizens and our allies and the privacy concerns shared by Americans and citizens around the world," said White House press secretary Jay Carney.
Administration officials refused to comment on a report indicating that Obama learned only this year about a program that monitored the communications of foreign leaders -- a situation that wouldn't be particularly unusual, said an intelligence expert.
Paul Pillar, a former senior intelligence officer, said most presidents don't know about "the targeting decisions" made by their intelligence agencies.
"It would be a horrible drain on the president's time and attention," Pillar said.
The Wall Street Journal reported Monday that the NSA ended a program monitoring foreign leaders after an internal review revealed its existence; the account suggested that Obama did not know about the programs until that review began during the summer.
Spain is the latest in a string of nations to protest NSA surveillance tactics, revealed in news reports based on disclosures by former NSA contractor Edward Snowden. Other nations include Germany, France, Brazil and Mexico.
Carney said a report on the review triggered by the Snowden revelation is due by the end of the year. But leaders in Germany and other countries are demanding immediate changes to U.S. surveillance policies.
Pillar said it's not the tactics themselves that create international friction as much as the fact that they have now been publicized.
"Not only do allies spy on each other all the time, allies know about it all the time," Pillar said.
Normally, he said, nations that discover surveillance from other countries would tighten their security procedures and not make "a public stink" about it.
But the news coverage – inspired by the Snowden revelations and fueled by outrage from their domestic constituents – forces leaders to confront the United States.
The issue is particularly sensitive in Germany, where memories of the nation's Cold War divisions remain fresh. That includes domestic spying by police forces in Communist-run East Germany – the native region of Chancellor Merkel, an outspoken critic of NSA tactics.
"Their history is speaking very loudly to them," said Heather Conley, senior fellow and director of the Europe Program with the Center for Strategic and International Studies.
Conley and Pillar said intelligence agencies do gather information on each other, on items ranging from positions on trade negotiations to the political troubles of the targeted government.
The difference these days? "It's a public discussion," Conley said.
Since the Snowden revelations began appearing in June, Obama and other officials have said the NSA surveillance programs are designed to help thwart terrorist attacks, not to spy on average citizens. Programs are designed in such a way to detect patterns of communication between suspected terrorists, they have said.
Merkel demanded a U.S. response after reports that her cellphone had been monitored by the NSA. Carney said that, in a phone call last week, Obama assured Merkel that "we do not and will not monitor the chancellor's communications," a statement that leaves open the possibility of past efforts.
The administration did deny a German news report that NSA Director Keith Alexander informed Obama about surveillance of Merkel three years ago.
"Gen. Alexander did not discuss with President Obama in 2010 an alleged foreign intelligence operation involving German Chancellor Merkel, nor has he ever discussed alleged operations involving Chancellor Merkel," said NSA spokesperson Vanee Vines. "News reports claiming otherwise are not true."
Germany has demanded changes in mutual intelligence rules. The Germans are sending an intelligence team to Washington this week to meet with U.S. counterparts.
Also, a group of European Union parliamentarians are in Washington for what Carney called an "ongoing U.S.-E.U. discussion of privacy issues."
Carney said, "this is obviously something that has been of concern and we are working to address those concerns diplomatically, through diplomatic channels, and also in the way that we're talking about these issues now."
The recent disclosures about the NSA have "caused tension in our relationships," Carney said, but "we have extraordinarily strong and important intelligence and security relationships with our allies."
While the United States and Germany figure to remain allies, Conley said the flap could undermine joint efforts on trade, data-sharing and law enforcement efforts to block potential terrorist attacks.
"This is not going to wait until the review," she said. "This requires leadership and action."
end quote from: