There are warnings of travel disruption with both bridges out of south Wales to close ahead of what forecasts describe as a 'major Atlantic storm'.
Britain Braces for Massive Storm
Britain braces for worst storm in years
Train companies warn against travel as hurricane-force storm approaches
UK weather: Amazing picture of train battered by freak wave as most powerful ...
England and Wales set for 'worst storm in years' 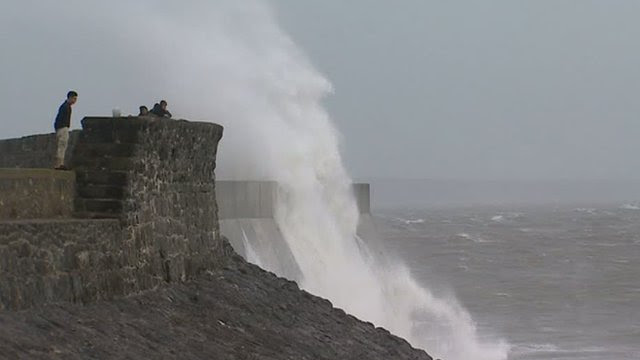 There are warnings of travel disruption with both bridges out of south Wales to close ahead of what forecasts describe as a 'major Atlantic storm'.
The Met Office warns of winds gusting up to 80mph in some areas of southern England and Wales, although the storm will pass quickly.
The M48 suspension bridge was closed to traffic from 19:00 Sunday. The second Severn will shut from 03:00 Monday.
Trains are expected to be disrupted as well as warnings of possible flooding.
The closures of both bridges - expected for several hours - were announced as very high winds and heavy rain were forecast to peak at around 04:00 on Monday.
A statement by Gwent Police said: "The decision taken by the Highways Agency in England, Traffic Wales, Gwent Police and Avon and Somerset Police will be kept under review so that the M4 crossing is reopened as soon as the wind drops and it is safe to do so.

There is a strong possibility this will impact on the early Monday rush hour, so people are being urged to plan ahead”

Gwent Police
"While the crossings are closed the diversion will by via the A449, A40, M50 and M5.
"Those travelling from west Wales can use the A465 to join the diversionary route. A previously planned overnight closure of the M50 for road works has been cancelled to allow for the diversion.
"The joint decision has been taken to protect the safety of people who would be using the crossings.
"There is a strong possibility this will impact on the early Monday rush hour, so people are being urged to plan ahead."
Meanwhile, Network Rail has imposed speed restrictions on a number of train routes which will mean trains from south Wales to London Paddington are likely to be delayed by up to an hour.
First Great Western said a number of other services could also be affected by the weather.
Arriva Trains Wales also warn of possible delays and are urging passengers to log on to its Journey Check website before travelling.
Cardiff Airport said flights may be disrupted and advised passengers to check their flight status with airlines before travelling.
Earlier on Sunday there was concern that trees could come down affecting power supplies.
And Dwr Cymru Welsh Water has urged its customers to let them know about any flooding in the sewer networks.
'Developing situation' Martin Young, chief forecaster at the Met Office, said: "While this is a major storm for the UK, we don't currently expect winds to be as strong as those seen in the 'Great Storm' of 1987 or the 'Burns Day storm' of 1990.

Over the last day or so the guys have been filling lorries with sandbags to save time, and they have additional chainsaws as falling trees could be a risk”

Andrew Morgan Rhondda Cynon Taf council
"This weather system is typical of what we expect to see in winter but as it's coming in during autumn - when trees are in leaf - and while the ground is fairly saturated, it does pose some risks.
"We could see some uprooted trees or other damage from the winds and there's a chance of some surface water flooding from the rainfall - all of which could lead to some disruption."
Irish Ferries have cancelled the fast ferry service between Holyhead and Dublin.
Rosslare to Pembroke passengers are asked to ring 08717 300 400 or check the Irish Ferries website.
Meanwhile, Natural Resources Wales (NRW) website listed three flood alerts as of 17:30 GMT Sunday evening for the Lower Dee Valley from Llangollen to Trevalyn Meadows; Upper Dee Valley from Llanuwchllyn to Llangollen including Corwen; and the Vyrnwy Catchment.
Earlier flood warnings - more serious than alerts - on the Afon Vyrnwy, Afon Tanat and Afon Cain and their tributaries had been lifted.
A NRW spokesman said: "Whilst all of Wales can expect heavy rainfall, the worst affected areas are likely to be Powys, Denbighshire, Flintshire and Wrexham.
"The strong winds expected late Sunday and during the early hours of Monday morning could cause large waves along the Pembrokeshire and south Wales coasts.
"Officers have been monitoring river levels closely and checking flood defences over the weekend and will continue to keep a close eye on the situation."
Sandbags Many local authorities have been preparing for bad weather.
Rhondda Cynon Taf councillor Andrew Morgan - cabinet member for frontline services - said sandbags were being filled and preparations were being made for fallen trees. 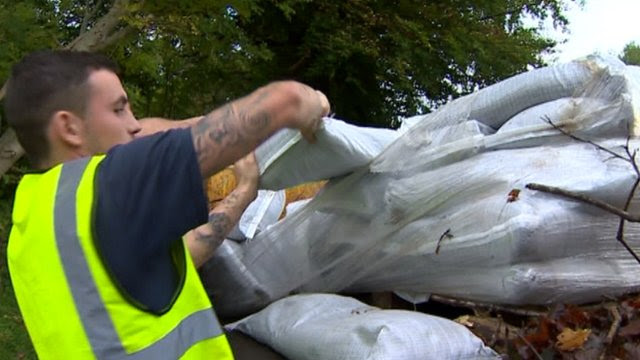 Cannot play media. You do not have the correct version of the flash player. Download the correct version
Rhondda Cynon Taf council workers were filling sandbags in readiness
Mr Morgan said crews worked all day on Saturday to remove fallen leaves to try and stop gullies being blocked, which could lead to roads flooding.
"Our advice to people beforehand is to check in case there's anything loose in their gardens which could be flown about and to check for blocked drains and culverts and to contact the local council as soon as possible and we'll try and get someone there to assist," he added.
Meanwhile Dwr Cymru Welsh Water is asking its customers to work with them to keep sewers flowing through wet weather.
"The network gets placed under increased pressure during this type of weather therefore we would be grateful if customers could immediately notify us on issues they become aware of relating to it in their area," said director of waste water services Steve Wilson.
"We would ask customers to call our 24 hour operational helpline on 0800 085 3968 to report any issues."