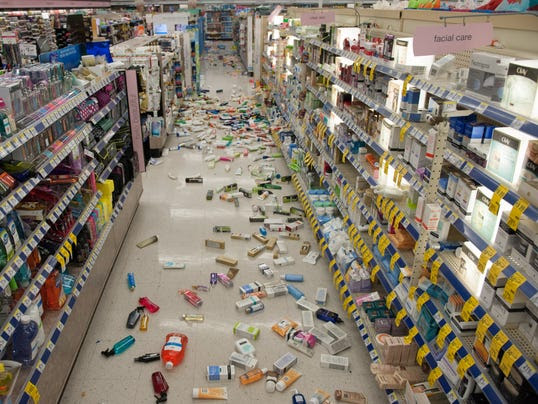 (Photo: Blaine Ohigashi, AP)
SHARE 2384 CONNECT 308 TWEET 49 COMMENTEMAILMORE
LOS ANGELES — A 5.1 earthquake centered at La Habra near Los Angeles rolled Southern California Friday evening.
The strong earthquake was felt widely across the region shortly after 9 p.m. PT. The USGS said the epicenter was one mile from Brea, located about 20 miles southeast of downtown Los Angeles, and three miles from Rowland Heights and Fullerton.
Southern California Edison reported power outages to about 2,000 customers following the quake.
The quake triggered a rockslide that closed Carbon Canyon Road in northern Orange County near the center of the quake, the California Highway Patrol and Brea police reported. The rockslide caused a car to overturn, and the people inside the car sustained minor injuries.
A broken water main in Fullerton, not far from the center of the quake, was attributed to the temblor, the Orange County Register reported in a tweet.
The quake was felt as far south as San Diego and as far north as Ventura County, according to citizen responses collected online by The U.S. Geological Survey.
It was followed by more than two dozen aftershocks. The 5.1 quake was preceded by a 3.6 quake an hour earlier.
The larger quake rattled bookshelves across the region, and police and fire officials said they were looking for any damage. Several people who live in the area near the quake posted pictures on social media showing broken glasses and dishes that tumbled from shelves or cabinets.
Los Angeles Department of Public Works said it was sending crews to check dams, bridges and other infrastructure for damage.
Callers to KNX-AM reported seeing a brick wall collapse, water sloshing in a swimming pool, and wires and trees swaying back and forth.
"Tonight's earthquake is the second in two weeks, and reminds us to be prepared," said L.A. Mayor Garcetti. "The Los Angeles Police and Fire Departments have conducted an assessment and report no damage in the City."
U.S. Geological Survey seismologist Lucy Jones at CalTech in Pasadena told the Los Angeles Times that the 5.1 quake has a 5% chance of being a foreshock of an even larger quake. "There could be even a larger earthquake in the next few hours or the next few days," she said.
Preliminary data suggest Friday night's 5.1 magnitude earthquake occurred near the Puente Hills thrust fault, which stretches from the San Gabriel Valley to downtown Los Angeles and caused the 1987 Whittier Narrows earthquake, Jones said.
"It's a place where we've had a lot of earthquakes in the past," she said.
The 5.9 Whittier Narrows quake killed eight people and caused $360 million in damage.
At Disneyland in Anaheim, rides were stopped as a precaution, the L.A. Times reported.
Friday's quake hit a week after a pre-dawn magnitude-4.4 quake centered in the San Fernando Valley rattled a swath of Southern California. That jolt shook buildings and rattled nerves, but did not cause significant damage.
Southern California has not experienced a damaging earthquake since the 1994 magnitude-6.7 Northridge quake killed several dozen people and caused $25 billion in damage.
Contributing: Associated Press
end quote from:
http://www.usatoday.com/story/news/nation/2014/03/29/quake-calif-la-orange/7045563/


It is not good news that today's quake was bigger than the one 1 week ago under the Santa Monica mountains. Because it might mean that there could be a bigger one or (one's) still fairly soon.
Posted by intuitivefred888 at 12:07 AM