Where rich Chinese want to live

Almost two-thirds of Chinese with more than $1.6 million in the bank have emigrated, or are planning to, according to research firm Hurun.
2 of 7 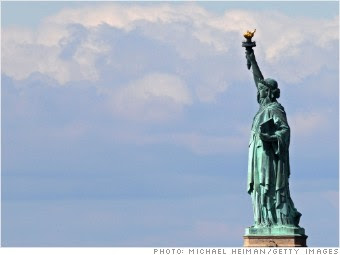 The United States is the favorite destination for wealthy Chinese.
Almost 82,000 individuals born in China were granted permanent resident status by the U.S. in 2012, according to the Department of Homeland Security. The number was even higher in 2011.
Only Mexico sends more immigrants to the U.S. A program that allows foreigners to invest $500,000 in exchange for a green card has been popular with Chinese, although most are still granted entry for other reasons.
Access to quality education is one of the biggest draws for Chinese hoping to move to the U.S. -- along with cleaner skies and water supplies.

Source: Rankings based on Hurun Research survey of 393 wealthy Chinese conducted tween May and November 2013.

Where rich Chinese want to live

Email ThisBlogThis!Share to TwitterShare to FacebookShare to Pinterest
Labels: 000 Chinese given permanent resident status in U.S. in 2012, 82