Flight Deck doors:Bulletproof and "couldn't be penetrated by an axe"

Airliners have been fitted with strengthened flight deck doors - intended to prevent intruders from taking control - since 9/11. David Learmount, safety editor at Flight International magazine, says they are "bulletproof" and "couldn't be penetrated with an axe".
Sylvia Wrigley, light aircraft pilot and author of Why Planes Crash, agrees it's unlikely anyone would be able to force their way in. "Even if the door was being broken down, they wouldn't be able to get in before there'd been a mayday call, unless the pilots were incapacitated," she says.
However, one former pilot, who did not wish to be named, has suggested there is theoretically a way to disable the lock and get into the flight deck.
But in any case, however secure the door, there are times when the door is open - when a member of the crew either visits the toilet or has to check on something in the cabin. It's always been pointed out that it would be possible to rush the cockpit when this is the case. Some airlines, including Israel's El Al, have double doors to guard against this scenario. Gratton says there's a procedure which requires a member of the cabin crew to guard the door when it's opened.
But even in the event of hijackers rushing the cockpit, it would be easy for either crew member to send a distress signal.
end partial quote from: 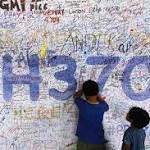 then anyone (including one or even both pilots that got locked out of the Flight deck "cockpit" would not be able to get back in under "Any circumstances".

However, if you think about a window blowing out in the cockpit at around 45,000 feet, possibly the first thing to go would be whoever's eardrums were in the cockpit so if two or more people were in there, they couldn't verbally communicate. the second thing that would happen fairly quickly is whoever (one or more) people who were in the cockpit would be unconscious because it would be 60 below zero fahrenheit which is an average temperature at 45,000 feet along with extremely low air pressure (not enough to breathe at all in any effective way).

So, one theory would be that when the autopilot took the plane to 45,000 feet a window blew out or cracked and the air pressure failed and the pilot or crew in the cockpit became deaf when their ear drums suddenly broke, couldn't communicate anymore verbally in a useful way(even by radio) and possibly tried to turn back towards Malaysia before he or they passed out and maybe never returned to consciousness.

This is another logical theory of what might have happened which might also go along with a wayward autopilot.

Email ThisBlogThis!Share to TwitterShare to FacebookShare to Pinterest
Labels: Flight Deck doors:Bulletproof and "couldn't be penetrated by an axe"