I was looking up a Nepalese name called Sushma and this is one of the articles that turned up. My wife was telling me about having planned in the 1980s to go to Nepal to help remove the trash from Mt. Everest but the lady she was going with got pregnant so they didn't go then. Though I didn't try to climb Mt. Everest myself I do have friends that have. However, it is expensive to do this so mostly only fairly rich people do this and some die because the altitude and cold is too much for them. However, unlike the trash I think most bodies that can be recovered eventually are.

Though I didn't go directly into the Mt. Everest Area on the other side of the 20,000 foot pass where buses go into Tibet from Nepal there is Helambu district which is where my family and I trekked with backpacks and one guide and a part time packer who was 15 years old named Bimbahadure which meant "STrong one" in Sherpa. At 15 he was already married. We trekked for about 50 miles over about a week's time from about 5000 feet in elevation up to about 10,000 feet in elevation in February 1986. 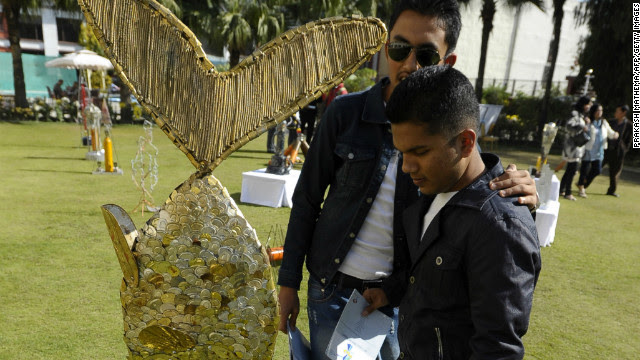 Visitors look at art made from trash collected on Mount Everest, commissioned for the "Mt. Everest 8848 Art Project" in Kathmandu on November 19, 2012.
HIDE CAPTION
'Mountain' of art
<<
<
1
2
3
4
5
6
7
>
>>
STORY HIGHLIGHTS
(CNN) -- Since Sir Edmund Hillary and his Sherpa guide, Tenzing Norgay, first conquered Mount Everest in 1953, thousands of trekkers have tried to follow their footsteps.

According to the Nepalese Ministry of Culture, Tourism and Civil Aviation, more than 3,500 have successfully climbed the 8,848-meter (29,029-foot) mountain, the world's highest. More than a tenth of that number scaled the summit last year alone.
But with the mountaineers' lofty dreams come a price: a trail of trash that now threatens the peak's environment.
A group of 15 artists in Nepal are turning that trash into art. Under a project called "Mt. Everest 8848 Art Project I" created last year, they have collected 1.5 tons of garbage brought down by climbers from the mountain, including remains of a helicopter that had crashed into the slopes during the 1970s.
"With this collaboration we aimed to raise awareness about pollution at Everest," explained Kripa Rana Shahi, director of Da Mind Tree, the organization that initiated the project.

Conquering the world's highest peak
Working tediously for a month, the artists transformed oxygen cylinders, cans, glass bottles and discarded trekking tools into 74 pieces of art and held their first of many exhibitions for interested buyers in November 2012.
Geographer reaches Mount Everest summit amidst tragedy
We hope our creations will help inspire actions against pollution at the Everest
Nara Bahadur BK, artist
"Many of the artworks reflect mountain life and mountaineering experiences," says artist Sushma Shakya. "It was interesting what we came up with, and how this trash could turn into something beautiful."
"The visitors are amazed by the artwork, and we've received encouraging feedback. We hope our creations will help inspire actions against pollution at the Everest," Nara Bahadur BK, another artist, said.
The exhibitions have attracted more than 3,800 visitors, with the pieces priced from $17 to $2,400.
Nineteen pieces have been sold so far, and part of the proceeds will be given to Everest Summiteers Association, which has collaborated with the project. The association was the first to initiate a cleanup trip to Mt. Everest in 2005 and has continued its efforts to make the mountain pollution free.
"Each expedition to Everest is required to take a garbage deposit and bring their waste back," Diwas Pokhrel, the group's general secretary, said. "But this system has not been strictly implemented."
In last two years, the association has collected over 10 tons of garbage from the Everest, but it estimates that another 10 tons are still littering the slopes.
According to the association, biodegradable garbage is separated from the collection and turned into compost at Namche Bazaar, the major stop point before the base camp. But much of the garbage comprises non-degradable items such as oxygen cylinders, tin cans, and plastic and glass bottles. These are airlifted to Nepal's capital, Kathmandu.
Turning trash into art is one way of managing waste. Da Mind Tree says it will continue working on similar projects. "We hope our creative works of art will inspire and encourage people to keep the mountains clean," Shahi said.
Is Mount Everest like a 'morgue'?
Posted by intuitivefred888 at 3:36 PM