The Island of Calfornia?


The Island of California

Examine the original 17- and 18th century maps of the New World at Honnold-Mudd Library and you'll find an array of creative geography. But there's one point on which all seem to be in agreement: California was an island.
March 11, 2014  by Mark Wood comments 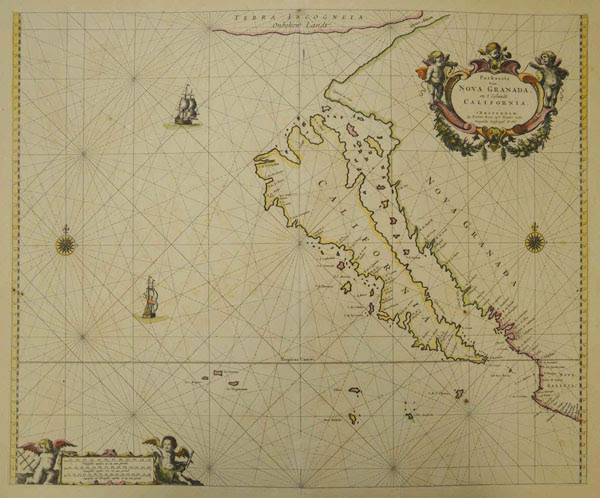 1600s map of California from Honnold-Mudd Library Special Collections.
Somehow it seems fitting that the story of California should begin with a fabulous tale about a mythical island.
Both the island and the myth, along with the state’s future name, seem to have sprung first from the pen of Spanish writer Garci Ordóñez de Montalvo, whose lavish romantic novel Las Sergas de Esplandián (The Deeds of Esplandián), published around 1510, described a race of griffin-riding Amazons living in a far-off realm rich in gold and precious stones—“an island on the right hand of the Indies … very close to the side of the Terrestrial Paradise.” He dubbed this imaginary isle California, a name that may have been constructed from Latin roots meaning “hot oven.”
So, right from the start, California was portrayed as isolated, rich, strange, adventurous, bigger than life, sunburned and next door to Paradise. Is this starting to sound familiar?
The real California—the Baja part—was first discovered by Europeans in 1533 by an expedition commissioned by Hernán Cortés, the Spanish conqueror of Mexico. Sailing west from the Mexican mainland, the crew set ashore on what they believed to be an island. After their shore party was slain in a clash with the inhabitants, the survivors returned to the mainland with tales of an island full of pearls and other riches.
No one knows exactly when or where place and name actually came together, but at some point in the ensuing years of failed colonization, someone—probably some conquistador familiar with Montalvo’s tale and eager to believe in its treasures—gave the presumed island its suitably mythic name.
Here’s where things get a bit strange. Through the rest of the 1500s and early 1600s, the few surviving maps depicted the west coast of North America as a continuous line and Baja California as a peninsula. Then, in the early 1600s, the supposed island of California suddenly returned to the scene, apparently firing the imagination of mapmakers across Europe. For more than a century thereafter, California would be depicted as a huge, rugged outline separated from the west coast of the North American mainland by a narrow strait.
Perhaps the most intriguing thing about maps from this period is that the truth was already known by the time they were made. As early as 1539, one of Cortés’s lieutenants, Francisco de Ulloa, sailed north and confirmed that the so-called island was actually a peninsula, and by the mid-1600s, the geographic facts of the place had been pretty clearly established by its Spanish masters. So why did the island of California resist reattachment to the mainland for so long?
One practical reason may be that the people most familiar with the actual place weren’t making the maps. In the 16th and 17th centuries, the Spanish held sway over much of western North America. Most of the surviving maps from this period, however, were drawn by cartographers in Venice, Paris, Amsterdam and London. These maps were meant for public consumption, so they needed to appeal to the romantic notions of the time. Meanwhile, Spanish mapmakers were drawing their maps behind closed doors to be used by actual navigators, and Spanish officials, jealous of their secrets and worried about foreign intrusions into their New World possessions, had good reason to keep them under wraps—or even to encourage misinformation.
Historian Dora Beale Polk blames the voyage of the famous English explorer (and gentleman pirate) Sir Francis Drake into Pacific waters in 1578 for the myth’s 17th-century revival. Confused stories about Drake’s exploits along the west coast shores seem to have lent new strength to the notion that there was a continuous strait separating those lands from the continent.
But by the beginning of the 18th century, the only remaining prop for this geographical blunder seems to have been the persistence of myth. Mapmakers who should have known better still clung to the diminishing evidence that California was an island. Perhaps they were so enthralled by the notion of California as a strange and magical place—a place that simply felt more suitable as an island—that they couldn’t bring themselves to accept the more pedestrian truth.
A lot has changed, of course, since those maps were made. The California of the 1600s was eventually subdivided into three huge, modern states, one north of the border and two south of it. Here in the United States, the 31st state became the biggest, most populous, most diverse, and, in many ways, most controversial state in the Union.
And yet, as a metaphor, the island of California still feels eerily appropriate, even today. Maybe because there’s so much truth in it. After all, as a bio-region, California has been termed an “island on the land,” isolated from the rest of the continent by such natural barriers as deserts and mountain ranges. And from an economic standpoint, the state is frequently described as if it were a separate nation. (With last year’s economic surge, California reportedly regained its theoretical place as the eighth largest national economy in the world, just behind the United Kingdom and Brazil and just ahead of Russia and Italy.)
Perhaps most importantly, California continues to occupy a place in the cultural life of our nation that sets it apart. Admired by some as a place of innovation and a harbinger of national change and decried by others as a narcotic in the body politic, intoxicating the rest of the country with its crazy ideas, the state seems to inspire in Middle America just about every emotion except apathy.
In 1747, Ferdinand VI of Spain issued a royal proclamation declaring: “California is not an island.” That may have helped bring an end to the literal vision of California as an enchanted isle, but the idea of California as a quasi-myth—a strange and wonderful place in the distant west where venturesome souls might go to find adventure or wealth or simply a spot in the sun—was just getting started.
end quote from:
http://magazine.pomona.edu/2014/spring/the-island-of-california/

All this sort of reminds me of what my parents told me about a legendary Queen Califia which also might have been connected to an author in the 1500s. However, when I heard the story it had been an actual legendary ancient queen of California. Which is true? Here is what I found online about her.

Email ThisBlogThis!Share to TwitterShare to FacebookShare to Pinterest
Labels: The Island of Calfornia?