Associated Press
DARRINGTON, Wash. — As firefighter Jeff McClelland uncovered a body on the moon-like surface that blankets what used to be the community of Oso, he soon realized that the search party had a close connection to the victim: The dead man's son and brother were among the volunteers scouring the debris field.
The relatives sat beside the body as it was zipped into a bag. McClelland found himself overcome with tears.
The discovery served as a touching reminder of the deeply emotional work that is playing out in this tight-knit town as rescuers like McClelland search for bodies in the muck and devastation, hoping to at least bring some closure to the relatives and friends of those who have not been found.
"I can go home and ... eat some food, hug my wife, come in and hug my friends the next morning and say, 'Let's go again. We've got something to do. We've got a job to do, so let's go do it,'" McClelland said, recalling his thoughts on Wednesday.
Scores of people once thought missing in the mudslide have turned up safe, but that provided little relief to rescuers like McClelland who are tasked with bringing closure to the relatives and friends of those who have not been found.
Hope of a miracle discovery of a survivor has faded as the search entered its sixth day Thursday, replaced by acknowledgement that some families may not be able to bury a body.
Authorities cross-referencing the reports they received of missing people with those who had checked were able to eliminate 140 people from the list of the missing Wednesday, said Snohomish County Emergency Management Director John Pennington.
That left 90 confirmed missing, with another 35 who authorities are unsure were in the area when a hillside collapsed Saturday morning 55 miles northeast of Seattle.
Becky Bach watches and waits, hoping that search crews find her brother, his wife, her 20-year-old great-niece and the young girl's fiance.
"Realistically ... I honestly don't think they're going to find them alive," Bach said, crying. "But as a family, we're trying to figure out what to do if they find no bodies."
Doug Massingale waits too, for word about his 4-month-old granddaughter. Searchers were able to identify carpet from the infant's bedroom, but a log jam stood in the way of a more thorough effort to find little Sanoah Huestis, known as "Snowy."
"It's stressful to think about," he said. "A little baby that hasn't gotten a start yet in life. It's too much."
Crews found another body late Wednesday, said Brian McMahan, a landslide incident spokesman. Authorities have now discovered at least 25 bodies, though not all have been recovered. Authorities said they expected to update the toll Thursday morning.
Trying to recover every corpse would be impractical and dangerous.
The debris field is about a square mile and 30 to 40 feet deep in places, with a surface that includes quicksand-like muck, rain-slickened mud and ice. The terrain is difficult to navigate on foot and makes it treacherous or impossible to bring in heavy equipment.
To make matters worse, the pile is laced with other hazards that include fallen trees, propane and septic tanks, twisted vehicles and countless shards of shattered homes.
The knowledge that some victims could be abandoned to the earth is difficult to accept.
"We have to get on with our lives at some point," Bach said.
Bach spoke via phone about a wedding the family had planned for summer at the rural home that was destroyed. And how, she wondered, do you plan a funeral without a body? "We'll probably just have a memorial, and if they find the bodies eventually, then we'll deal with that then."
A death certificate, issued by the state, is legal proof that someone has died. Families often need them to settle their affairs. The authority to issue them starts with a county medical examiner or coroner, said Donn Moyer, spokesman for the Washington State Department of Health. If and when it appears there is no chance of finding someone, people can ask the county to start that process.
Two Washington National Guard Blackhawk helicopters arrived at the site Wednesday to relieve sheriff's helicopter crews that had been working since Saturday.
The Blackhawks' sole mission is body removal, said Bill Quistorf, chief pilot for the Snohomish County Sheriff's Office.
Other survivors began to grow impatient Wednesday that they weren't allowed to return to the sites of their homes to search for their valuables and keepsakes.
"This isn't right. All of us who are still alive need to have access and find what we can of our lives," said Robin Youngblood, who said her son-in-law was turned away from the slide site.
___
Baumann reported from Seattle.
___
Associated Press writers Phuong Le and Matt Volz in Seattle; P. Solomon Banda in Darrington, Wash.; and photographer Elaine Thompson in Oso, Wash.; and researcher Rhonda Shafner contributed to this report.
end quote from:
http://bostonherald.com/news_opinion/national/west/2014/03/mudslide_recovery_brings_tears_to_searchers 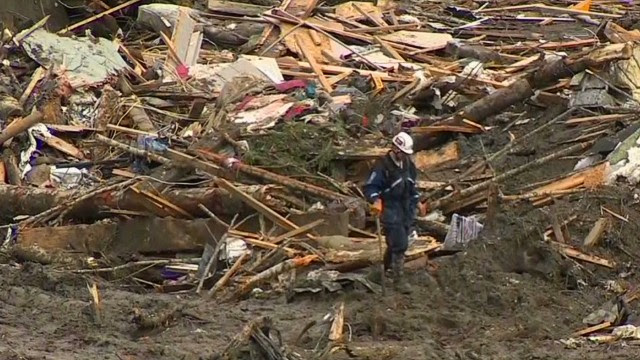 The confirmed death toll remained at 16, but several more bodies pulled from the wall of mud have not yet been included in the count, Snohomish County fire district Chief Travis Hots said.
"That number's going go up here shortly," Hots said after giving reporters an emotional description of the scene.
"You just can't fathom what we're up against out there until you get out there and see the lay of the land," he said.

Chief: Devastation must be seen in person

Race to save lives in Washington landslide 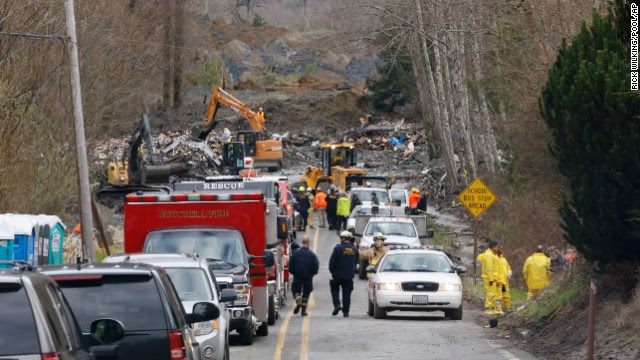 Response to landslide is 'very humbling'

Searcher: 'It's no fun finding bodies'
Saturday's landslide left dozens of buildings covered in up to 40 feet of mud near Oso, in the Cascade Mountains northeast of Seattle. Scores of rescuers have been digging into the slide with heavy machinery, chainsaws, pumps and their hands trying to save lives or, at least, bring solace to family members by finding bodies.
"They don't quit. Sometimes it takes several hours to get somebody out of an area," Hots said. When a body is extracted, "You can almost hear a pin drop out there. You see seasoned veterans in this business, they start to tear up. Their eyes get glossy."
A total of 90 people remain missing or unaccounted for, and Hots said searchers haven't given up hope of rescuing at least some of them.
"We're going to exhaust all options to try to find somebody alive," he said.
But Washington Gov. Jay Inslee said it was "extremely discouraging" that more survivors haven't been found.
"We were hopeful that we would find folks who might be protected by a car or a structure, but the force of this landslide just defies imagination," Inslee told CNN on Wednesday. "The cars that have been found have just literally been twisted into corkscrews and torn in half."
end quote from:
http://www.cnn.com/2014/03/27/us/washington-landslide/