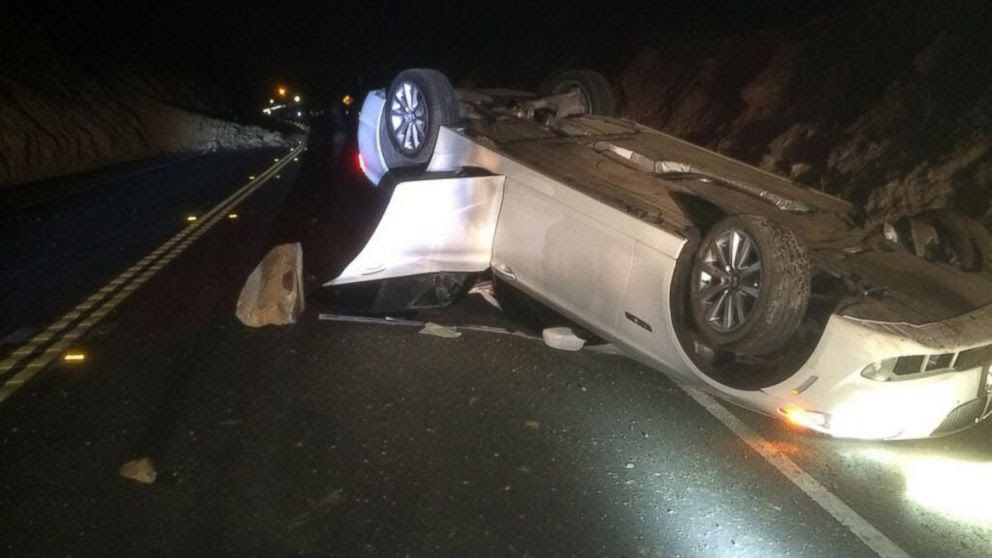 A magnitude-5.1 earthquake centered south of Los Angeles shook residents throughout Southern California and sent bottles and cans tumbling off shelves in stores, produced a rock slide that closed a road and forced a brief shutdown of rides at Disneyland. There were no reports of major damage or injuries.
In the Orange County city of Fullerton, 20 apartment units and half a dozen homes were red-tagged, displacing 83 people, police Lt. Mike Chlebowski said.
Southern California Edison reported power outages to about 2,000 customers following the quake.
The temblor struck at 9:09 p.m. Friday and was centered near Brea in Orange County, about 20 miles southeast of downtown Los Angeles, at a depth of 5 miles. It was felt as far south as San Diego and as far north as Ventura County, according to citizen responses collected online by the U.S. Geological Survey.
More than 100 aftershocks followed, including a magnitude-3.4 that hit Saturday morning. The main shock was preceded by two foreshocks registering magnitudes 3.6 and 2.1, scientists said.
Broken glass, gas leaks, water main breaks and a rockslide were reported near the epicenter, according to Twitter updates from local authorities.
Tom Connolly, a Boeing employee who lives in La Mirada, said the quake lasted about 30 seconds.
"We felt a really good jolt. It was a long rumble and it just didn't feel like it would end," he told The Associated Press by phone. "Right in the beginning it shook really hard, so it was a little unnerving. People got quiet and started bracing themselves by holding on to each other. It was a little scary."
A Red Cross shelter was set up in La Habra for residents forced out of their homes or who voluntarily chose to stay there. About 38 people including several families stayed overnight, Red Cross spokeswoman Meredith Mills said.
Hall of Fame baseball announcer Vin Scully was on the air calling the Angels-Dodgers exhibition game in the sixth inning at Dodger Stadium.
"A little tremor here in the ballpark. I'm not sure if the folks felt it, but we certainly felt it here in press box row," Scully said. "A tremor and only that, thank goodness."
Public safety officials said crews were inspecting bridges, dams, rail tracks and other infrastructure systems for signs of damage. The Brea police department said the rock slide in the Carbon Canyon area caused a car to overturn, and the people inside sustained minor injuries.
Callers to KNX-AM reported seeing a brick wall collapse, water sloshing in a swimming pool and wires and trees swaying back and forth. One caller said he was in a movie theater lobby in Brea when the quake struck and said people ran outside and hugged in the street.
Rides were halted at Disneyland in Anaheim, but no damage was found and the theme park was expected to have normal operations Saturday.
Friday's quake hit a week after a pre-dawn magnitude-4.4 quake centered in the San Fernando Valley rattled a swath of Southern California. That jolt shook buildings and rattled nerves but did not cause significant damage.
Friday's "earthquake is the second in two weeks, and reminds us to be prepared," Los Angeles Mayor Eric Garcetti said in a statement.
Southern California has not experienced a devastating earthquake since the 1994 magnitude-6.7 Northridge quake killed several dozen people and caused $25 billion in damage.
Preliminary data suggest Friday night's 5.1 magnitude earthquake occurred near the Puente Hills thrust fault, which stretches from the San Gabriel Valley to downtown Los Angeles and caused the 1987 Whittier Narrows earthquake, USGS seismologist Lucy Jones said.
"It's a place where we've had a lot of earthquakes in the past," she said.
The 5.9-magnitude Whittier Narrows quake killed eight people and caused $360 million in damage.
———
AP sports reporter Beth Harris contributed to this report from Buena Park, Calif.
end quote from:
http://abcnews.go.com/US/wireStory/magnitude-51-earthquake-shakes-los-angeles-23109872

The most recent larger quake that scared me was about 12 years ago in orange county at my cousin's house when my 5 year old was in a pool. I fell down in the living room because when it hit I was standing up. However, I immediately got up and ran for my 5 year old who I Knew was probably in the luckily large swimming pool. I was afraid she might be unconscious from hitting her head on the side of the pool during the quake. Instead she was in the middle of the pool on a float and said, "Why is all the water going out of the pool?" I was very relieved she wasn't unconscious or worse and told her to stay there until the quake ended. She was cushioned by the water by floating in the center of the pool. That was a 5.0 or bigger quake too.
Posted by intuitivefred888 at 10:57 AM