Two Boston firefighters died today while battling a wind-whipped nine-alarm blaze that raced through a brownstone in the city’s fashionable Back Bay neighborhood, city officials said.
Lt. Edward J. Walsh, 43, of West Roxbury, and Firefighter Michael R. Kennedy, 33, of Hyde Park were killed in the ferocious blaze, officials said this evening at a news conference.
“Today’s a sad day in the history of the Boston Fire Department,” said Fire Commissioner John Hasson. “Our hearts go out to the families. Our thoughts and prayers go out to them.” 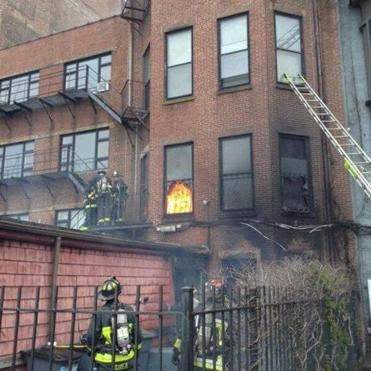 Photos: Back Bay fire
“We lost two heroes here today,” said Boston Mayor Martin J. Walsh.
Firefighters responded at 2:43 p.m. to the four-story brick building, where a fire was spreading upward from the basement, fanned by winds gusts blowing around 40 miles per hour.
Deputy Fire Chief Joe Finn, who was the incident commander, said the strong winds blowing off the nearby Charles River appeared to have fanned the flames.
“In 30 years, I’ve never seen a fire travel that fast,” he said.
He said the two firefighters were found in the basement of the building, where the fire apparently started. He said they had gone into the basement, down the interior cellar stairs, with a line to battle the flames.
“They weren’t in the building more than two or three minutes when they ordered a Mayday, [signaling] that they were trapped,” he said.
Kennedy was found in the basement a half-hour after the fire started, then transported to Massachusetts General Hospital, where he was pronounced dead. Walsh was found in the basement by the cellar stairs. Recovered from the building only this evening, he was pronounced dead at the scene, Finn said.
Fire officials knew that Walsh remained in the building but could not get to him as the fire raged, Finn said, calling it a “tough call” but a necessary one.
A backdraft explosion injured other firefighters, blowing them down stairs, as they tried to enter the building to search for the two men, Finn said.
A total of 13 other firefighters were injured, suffering burns and musculoskeletal injuries, Finn said. But officials said they weren’t aware of any life-threatening injuries among that group.
Earlier today, Boston Emergency Medical Services spokesman Nick Martin said a total of 18 people had been transported to the hospital. It wasn’t immediately clear who the other people transported from the scene were or what their conditions were.
Finn said firefighters, when they first arrived at the scene, had saved a number of occupants trapped on upper floors.
Lt. Walsh was married with three children, two boys and a girl, all under the age of 10. He had worked for the department for 9 ½ years.
Kennedy was single, a Marine combat veteran. He had been on the job for 6 ½ years, said fire department spokesman Steve MacDonald.
The cause of the fire was being probed by Boston police and Boston Fire Department investigators, Finn said.
While cautioning that the investigation had to take its course, he said, “ I don’t have any reason to believe there’s any criminal intent here.”
He said the only thing he found suspicious was the fire’s “rate of travel,” which could well have been due to the wind stoking the flames.
Sam Wallace, who lives in the area, said he saw an explosion after the house caught fire.
“People were running out of the building screaming,” said Wallace, president of the Neighborhood Association of the Back Bay.
He said he saw several firefighters, many with soot covering their faces, being placed into ambulances.
“People were crying and weeping,” he said. “This has really been a sad day.”
The fire produced a cloud of black smoke so dense the only visible thing at one point this afternoon was the red flashing lights on the responding fire trucks.
On Beacon Street, firefighters threw ladders against the building, and clambered up them to direct streams of water into the brownstone. Firefighters could be seen walking on the roofs of nearby buildings.
Around 4:30 p.m., a police officer ordered reporters and others gathered on Beacon Street to move down the street because the fire scene was now deemed a crime scene.
“We have someone badly hurt over here!’’ the officer shouted at people.
The incident played out during today’s turbulent weather, with strong winds generated by a storm passing along the coast. Shortly before 3 p.m., around the time the fire was reported, winds were recorded as blowing at 32 miles per hour at Logan International Airport, gusting to 45 miles per hour. At around 4 p.m., as the fire continued to rage, winds were blowing at 28 miles per hour and gusting to 39 miles per hour, the National Weather Service said.
The fire continued to produce white smoke late into the afternooon, hours after the original alarm.
Those injured were taken to Brigham and Women’s Hospital, Massachusetts General Hospital, Tufts Medical Center, and Beth Israel Deaconess Medical Center, Martin, the EMS spokesman, said.
The last time a Boston firefighter was killed in the line of duty was on Jan. 9, 2009, when the brakes on a fire truck failed and the vehicle crashed into a Mission Hill building, killing Lieutenant Kevin M. Kelley.
According to city assessing records, 298 Beacon is a four-story multi-unit apartment building currently valued at $1.6 million.
Beacon Street from Arlington Street to Massachusetts Ave. was closed this afternoon, Boston police said. Storrow Drive was intermittently closed. Police asked people to avoid the area and seek alternate routes.
Globe correspondent Catalina Gaitan contributed to this report. Evan Allen can be reached at evan.allen@globe.com. Follow her on Twitter @evanmallen. John R. Ellement can be reached at ellement@globe.com. Follow him on Twitter @JREbosglobe. Mike Bello can be reached at mbello@globe.com. Follow him on Twitter @thebelloblotter.