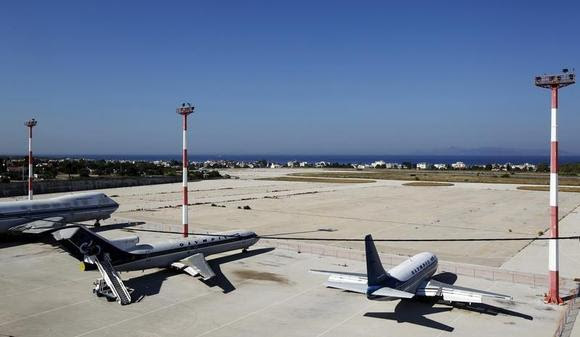 Disused aircrafts are seen on the tarmac of the old Athens' airport at Hellenikon suburb, southwest of Athens June 20, 2011.

Lamda Development SA
LMDr.AT
€6.50
+0.12+1.88%
20:41:00 IDT
Fosun International Ltd
0656.HK
HK$9.14
+0.01+0.11%
03/27/2014
Citigroup Inc
C.N
$47.34
-2.82-5.62%
23:15:00 IDT
(Reuters) - A Chinese-backed group is set to win Greece's biggest privatization prize so far, a 915-million-euro deal to develop a prime seaside property at the former Athens airport of Hellenikon, two sources close to the talks told Reuters.
The sole bidding group, led by Greek real estate firm Lamda Development (LMDr.AT) and backed by China's Fosun (0656.HK) and Abu-Dhabi-based property firm Al Maabar, raised its initial offer by 25 percent, the country's privatization agency HRADF said in a statement.
According to two senior HRADF officials directly involved in the talks, the improved offer is satisfactory and will most likely be accepted by the agency's advisers.
"I consider it highly unlikely that our advisers will recommend us to turn down the offer," one of the two officials told Reuters on condition of anonymity.
Advisers Citigroup (C.N) and Piraeus Bank (BOPr.AT) will submit their opinion on the improved bid in the coming days.
A third of the amount offered for the 99-year-lease of the 620-hectare-property, which is three times the size of Monaco, will be disbursed immediately on completion of the deal, with the rest to paid out within 10 years, the HRADF statement said.
Lamda Development, controlled by the powerful Greek Latsis family, has promised to invest more than 7 billion euros in the project. Greek economic institute IOBE has calculated it may create directly and indirectly about 50,000 jobs over 10 years.
PRIVATISATION TARGETS
Fosun is the second-biggest shareholder of Greece's top jewelry retailer Folli Follie HDFr.AT. Al Maabar is a unit of Abu Dhabi's sovereign fund Mubadala Development.
Hellenikon, one of Europe's biggest real estate projects, will go a long way towards helping Greece meet the privatization
targets set by its international lenders, and attract investment to revive its ailing economy battered by six years of deep recession.
Greece has to raise 3.6 billion euros from asset sales this year. But the bar may be lowered because privatizations of natural gas distributor DEPA and utility company Athens Water (EYDr.AT), initially planned for 2014, will be pushed back, senior HRADF officials have told Reuters.
About 3.9 billion euros worth of privatization deals have been signed since Greece's bailout began three years ago, raising so far about 2.6 billion euro in cash. It was supposed to have raised about 22 billion euros by the end of 2013, under the original terms of its bailout in 2010.
Athens has pledged to its lenders to redouble its privatization efforts to qualify for new bailout loans and attract private investment for its economy.
($1 = 0.7254 Euros)
(Reporting by Harry Papachristou and Angeliki Koutantou; Editing by Tom Heneghan)
end quote from:
Greece to pick China-backed bid for major privatization: sources
Posted by intuitivefred888 at 11:03 AM