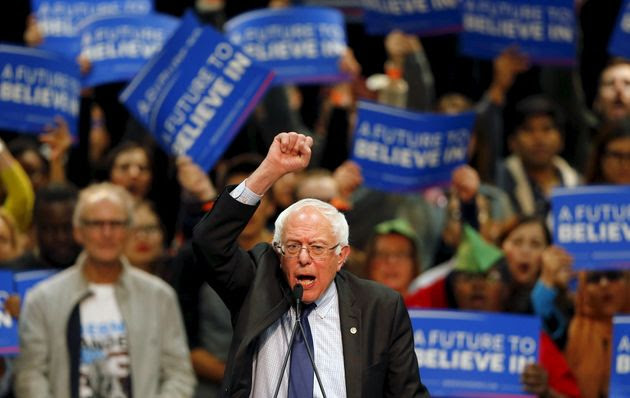 Mike Blake / Reuters
Sen. Bernie Sanders
WASHINGTON (Reuters) - Fresh from Democratic presidential primary wins over the weekend in three U.S. states, Bernie Sanders on Sunday claimed political momentum he said could help him win the backing of Democratic power brokers in his race against Hillary Clinton.
Sanders easily won nominating contests in Alaska, Washington and Hawaii on Saturday. His latest remarks reflect his plan to chip away at Clinton’s commanding lead in the number of delegates needed to win the party’s nomination.
Interviewed on Sunday by U.S. broadcasters, Sanders said Democratic “super-delegates,” who can change their allegiance, might rally behind him because some polls suggest he has a better chance than Clinton of beating a Republican candidate.
“Momentum is with us. A lot of these super-delegates may rethink their position with Hillary Clinton,” said Vermont Senator Sanders on CNN’S State of the Union news program.
About 85 percent of the votes at the July 25-28 Democratic National Convention in Philadelphia, where a party nominee will be chosen to face the Republicans in the Nov. 8 election, are being determined by state nominating contests.
The other 15 percent is held by party power brokers who are free to vote as they like, meaning they could hold the key in a tight contest. Super-delegates include party leaders and elected senators, members of the U.S. Congress, and governors.
After Saturday’s contests, the former secretary of state led Sanders by just under 300 pledged delegates in the race for the 2,382 needed to be nominated. Adding in the support of super-delegates, Clinton had 1,712 delegates to 1,004 for Sanders, according to a tally by RealClearPolitics.com.
The U.S. senator from Vermont needs to win up to two-thirds of the remaining delegates to catch Clinton, who will keep piling up delegates even when she loses under a Democratic Party system that awards them proportionally in all states.
He urged super-delegates to consider polls in which Americans are presented with potential battles between various presidential hopefuls. RealClearPolitics averages of polls show Sanders with a small edge over Clinton in a hypothetical contest against Republican front-runner Donald Trump.
Sanders said party leaders in states where he has won decisively will come under pressure to back him whether they have pledged to support Clinton or not. “The super-delegates are going to have to make a very difficult decision,” Sanders said on ABC’s This Week With George Stephanopoulos.
The Democratic party adopted the super-delegate system in the early 1980s to give party leaders more control over the nominating process.

Bernie Sanders Attacks The Media
9
Posted by intuitivefred888 at 5:02 PM