However, when I went into this article an article on Sanders was there instead. So, I guess my question would be: "Did Trump actually rescind his pledge to support the GOP Nominee?"

The answer appears to be "yes" because even though this word button above misdirects several other articles confirm this.

So, what this means in reality is Trump is the Only Republican Candidate who can win (potentially) under ANY circumstances. However, dyed in the wool Republicans for years likely are only going to hate him for this. This likely means "Hillary Clinton has at least a 75% chance of becoming the next U.S. President at this point.

Trump takes back vow to support to Republican nominee Republican presidential candidate, Donald Trump participates in a CNN town hall with Anderson Cooper in the historic Riverside Theatre, March 29, 2016, in Milwaukee. (Photo: Charles Rex Arbogast, AP)
Bad news for those few who imagined Donald Trump would quietly accept the GOP handing the party's nomination to someone else and support a non-Trump candidate.
The Republican front-runner told CNN's Anderson Cooper he no longer promises to support whoever ends up being the Republican nominee during a town hall in Milwaukee Tuesday.
"Do you continue to pledge to support whoever the Republican nominee is?" Cooper asked.
"No, I don't anymore," Trump replied.
Back in September the mercurial mogul signed a pledge promising to to back the eventual Republican nominee, even if the unthinkable happened and that nominee was someone he doesn't see in the mirror every morning.
At the time Trump said, "I have no intention of changing my mind," and "I see no circumstances under which I would tear up that pledge." 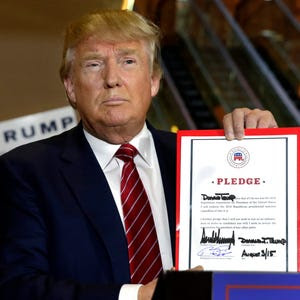 USA TODAY
Trump signs loyalty pledge to Republicans
That position has now, um, evolved and Trump's new view is that his support is conditional on who ends up being the eventual nominee.
"I'll see who it is," Trump said. "I'm not looking to hurt anybody. I love the Republican party."
Trump explained he was rescinding his vow because he feels he has been "treated very unfairly" by "the RNC, the Republican party, the establishment."
The billionaire businessman said a lot of people who be upset if he was deprived of the nomination.
"When somebody goes in and wins the election and gets less delegates than the guy that lost, I don't think that's right," he added.
As for Ted Cruz and other Republican candidates waffling on their support of him he if were to become the Republican standard bearer, Trump says he could care less.
"He doesn't have to support me," Trump said of Cruz. "I have many many more delegates than him."
"Look I beat these people badly," Trump said. "I don't want to make people uncomfortable. I don't need their support."