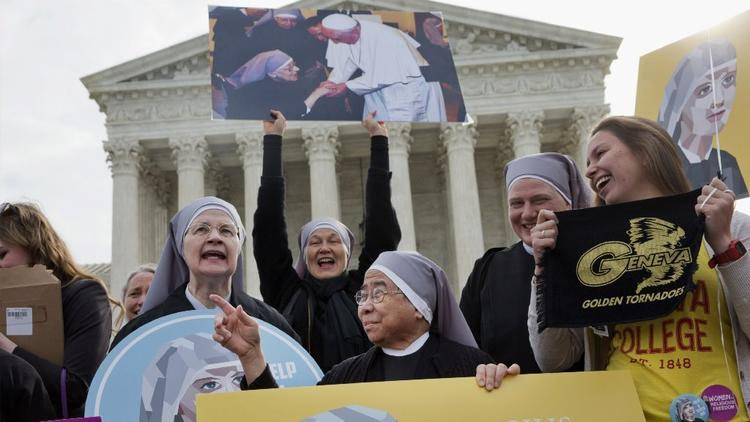 Nuns from the Little Sisters of the Poor and their supporters rally outside the Supreme Court on March 23 during arguments in the Zubik vs. Burwell case.
(Jacquelyn Martin / Associated Press)
begin quote from:
The Supreme Court floats a contraception compromise
Michael McGoughContact Reporter
Washington lawyers and journalists are scratching their heads — and spinning scenarios — after a surprise order from the Supreme Court in what is popularly known as the Little Sisters of the Poor case.
The case, whose official name is Zubik vs. Burwell, involves a challenge by religious nonprofit organizations to federal regulations requiring that employer-provided health insurance plans include contraception for women at no additional cost to the employee. The Little Sisters, a Roman Catholic order of nuns, operates homes for the elderly. Other plaintiffs include Catholic Charities and the Most Rev. David Zubik, the bishop of Pittsburgh.
Last week an eight-justice court heard oral arguments in the case, in which the nonprofits argue that the Obama administration is violating the Religious Freedom Restoration Act by requiring them to indicate in writing that they object to providing birth control to female employees — a bureaucratic step that allows the coverage to be provided and paid for by insurance companies or third-party administrators.
Paul Clement, the lawyer for the nonprofits, told the justices that the paperwork is not just a request to opt out of providing birth control but an authorization for the insurers to do so — which would make the nonprofits complicit in what they regard as evil. (The Los Angeles Times Editorial Board isn't impressed with the good sisters' argument.)

See the most-read stories this hour >>
It was expected that the justices would weigh the issue for another couple of months before ruling one way or another  — or dividing, 4-4, an outcome that would affirm lower-court rulings against the nonprofits without setting a national precedent. But on Tuesday the court issued an order asking lawyers on both sides to submit supplemental briefs.
The order says:
“Petitioners with insured plans are currently required to submit a form either to their insurer or to the federal government (naming petitioners’ insurance company), stating that petitioners object on religious grounds to providing contraceptive coverage. The parties are directed to address whether contraceptive coverage could be provided to petitioners’ employees, through petitioners’ insurance companies, without any such notice from petitioners.
“For example, the parties should consider a situation in which petitioners would contract to provide health insurance for their employees, and in the course of obtaining such insurance, inform their insurance company that they do not want their health plan to include contraceptive coverage of the type to which they object on religious grounds. Petitioners would have no legal obligation to provide such contraceptive coverage, would not pay for such coverage, and would not be required to submit any separate notice to their insurer, to the federal government, or to their employees.
See more of our top stories on Facebook >>
"At the same time, petitioners’ insurance company — aware that petitioners are not providing certain contraceptive coverage on religious grounds — would separately notify petitioners’ employees that the insurance company will provide cost-free contraceptive coverage, and that such coverage is not paid for by petitioners and is not provided through petitioners’ health plan.”
Is this is a distinction without a difference? How many devils can dance on the head of a pin?
Jon Healey, deputy editor of the Los Angeles Times editorial page and our in-house expert on the Obama administration’s “accommodation” on nonprofits, is skeptical that the alternative being floated by the court would placate the Little Sisters.
“The scenario the court sketches out wouldn’t answer the Little Sisters’ basic complaint, which is that by virtue of providing health insurance, they are complicit in supplying birth control methods they find sinful," Healey wrote in an email to editorial board members about the case.
“Today, they have to submit a form to insurers (or a letter to the government) saying they object to providing those methods. That prompts insurers to provide the coverage anyway, on their own dime.  Under the court’s structure, they would be alerting insurers that they do not want their insurance policy to cover such methods — even though federal law requires all health plans to do so. Insurers would provide the coverage anyway, on their own dime.
“The end result is exactly the same. And the end result is what the Little Sisters are suing over. They do not want their employees to receive this coverage unless said employees, on their own initiative, obtain separate, specialty policies for contraception. That’s a ludicrous position to take. The existing accommodation goes plenty far enough.”
Healey may be right, but it may not matter. If five justices agree to bless this additional variation in what is already a Rube Goldbergian arrangement, access to contraceptives will be preserved nationwide for employees of religious nonprofits — and without the dusty answer of a 4-4 split.
Follow Michael McGough on Twitter @MichaelMcGough3
MORE FROM OPINION
A win for transparency in Missouri execution cases
Why is Bernie Sanders struggling to win over black voters? Listen to his response
Decisions on SeaWorld's orcas and Griffith Park's puma reveal a dramatic shift in how we view nature
Posted by intuitivefred888 at 7:21 PM

Email ThisBlogThis!Share to TwitterShare to FacebookShare to Pinterest
Labels: The Supreme Court floats a contraception compromise