Realistically, the Secret Service is not going to allow weapons (other than theirs) at the GOP Convention. However, I really can't imagine a petition like this being taken seriously in any country but the U.S.
begin quote from:
Guns at GOP convention petition nears 35K, Trump wants to study "fine print"
Then-Republican presidential candidate Rand Paul and his wife Kelley Ashby walk outside the Quicken Loans Arena in Cleveland before an August debate. (Photo: Andrew Harnik, AP) Donald Trump says he wants to study a … 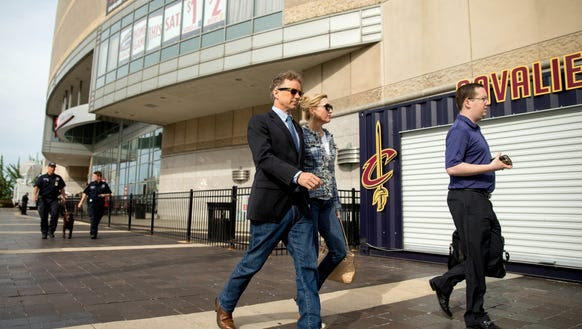 Then-Republican presidential candidate Rand Paul and his wife Kelley Ashby walk outside the Quicken Loans Arena in Cleveland before an August debate. (Photo: Andrew Harnik, AP)
Donald Trump says he wants to study a petition that calls for allowing the open carry of guns at the Republican convention this July in Cleveland.
While proclaiming himself "a very, very strong person for Second Amendment," the Republican front-runner told ABC's This Week that "I have not seen the petition. I want to see what it says. I want to read the fine print."
Posted on the website change.org, the petition of unknown origin notes that "though Ohio is an open carry state, which allows for the open carry of guns, the hosting venue -- the Quicken Loans Arena -- strictly forbids the carry of firearms on their premises." That "is a direct affront to the Second Amendment and puts all attendees at risk," said the petition that has more than 35,000 signers as of Sunday.
The other Republican presidential candidates -- Texas Sen. Ted Cruz and Ohio Gov. John Kasich -- have not commented on the open carry petition.
The name of the group purportedly behind the effort — Americans for Responsible Open Carry — does not appear anywhere else online and accepts online message only from networked supporters, the Akron Beacon Journal reported.
According to the website cnet on Sunday, the petition may have been started by a group as satire.

"A blog called Hyperationalist has claimed responsibility.
He or she writes: "It just doesn't seem right that thousands of patriotic Republican good guys should be left totally unprotected by whatever bad guys might wish to do them harm. I mean forgodsake people, ISIS could show up to take out everybody in and around that building and they'd be sitting ducks. Sitting ducks, I tell you! There might even be a bad egg or two among the delegates."
Hyperationalist didn't immediately respond to a request for comment.
However, his or her tweets since 2011 suggest that he's not exactly of the Republican cause. For example: "Win-win for the Trump people at last night's rally: a protester got beat up and a black guy got arrested. This was accompanied with the #NeverTrump hashtag."

The Ohio Republican Party said it was not aware of the petition, the Journal reported, nor was the host committee overseeing the convention, although it noted that the Secret Service, in conjunction with Cleveland, Cuyahoga County and state and federal authorities, is handling security for the event.
“They are coordinating and will be continuously refining security plans leading up to the national convention,” said Alee Lockman, a spokesperson for the Republican National Convention, the Journal says.
In 2012, firearms were banned by the Secret Service at the Republican convention in Tampa.
Contributing: Doug Stanglin