Obama Stresses a Need for Unity as Nuclear Summit Opens

Obama Stresses a Need for Unity as Nuclear Summit Opens

WASHINGTON—President Barack Obama stressed the U.S. and its allies must stand together against the threat of a nuclear-armed North Korea, as more than 50 world leaders gathered here for a two-day summit focused on stopping nuclear proliferation.
What should be on the Nuclear Summit agenda: Column
LIVE: PM Modi meets his New Zealand counterpart John Key 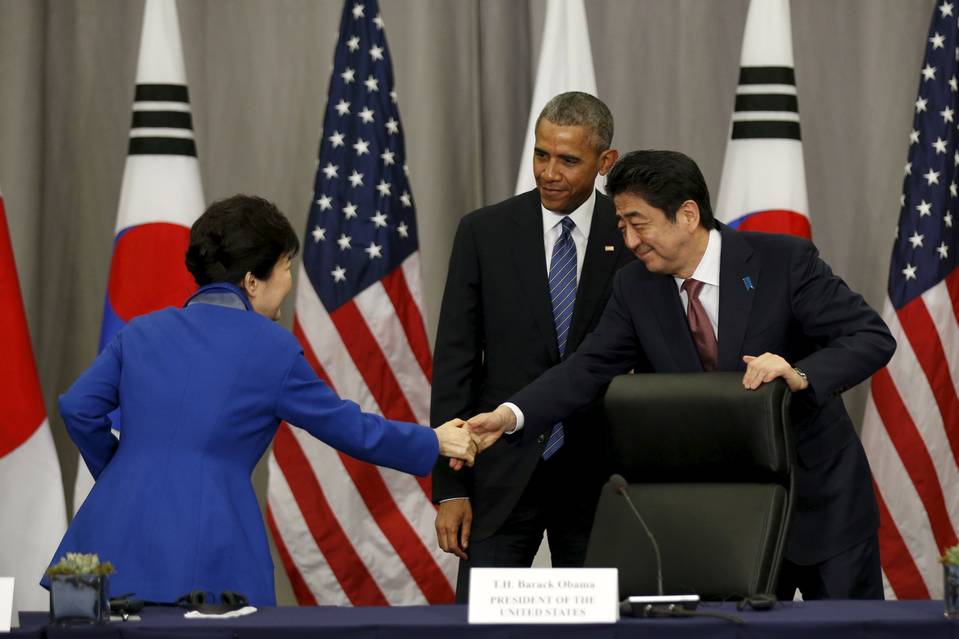 ENLARGE
President Barack Obama watched as South Korean President Park Geun-hye, left, and Japanese Prime Minister Shinzo Abe shook hands at the Nuclear Security Summit on Thursday. Photo: kevin lamarque/Reuters
By
Carol E. Lee
Updated March 31, 2016 4:57 p.m. ET
41 COMMENTS
WASHINGTON—President Barack Obama called for the U.S. and its allies to stand together against the threat of a nuclear-armed North Korea, as more than 50 world leaders gathered here for a two-day summit focused on stopping nuclear proliferation.
Mr. Obama, at the start of a meeting Thursday with Chinese President Xi Jinping, said both countries “are committed to denuclearization of the Korean Peninsula.”
The increasingly heated provocations from North Korea emerged as a centerpiece of the Nuclear Security Summit. The meeting also is marked by rising concern that terrorists, particularly Islamic State, are seeking nuclear weapons or radioactive material.
Mr. Obama also met Thursday with South Korean President Park Geun-hye and Japanese Prime Minister Shinzo Abe, saying afterward that “security cooperation is essential to maintaining peace and stability” in the region and to deterring the “potential of nuclear proliferation as a consequence of North Korean activities.”
The president’s comments come as nuclear proliferation concerns have become part of the 2016 presidential race. Donald Trump, the leading Republican candidate, has said some U.S. allies, including South Korea and Japan, should feel free to acquire nuclear weapons—a position that puts him at odds with longtime U.S. policy.
Mr. Trump’s Republican primary opponents, Sen. Ted Cruz of Texas and Ohio Gov. John Kasich, have disagreed with the front-runner’s statements. “Nuclear proliferation, even among our close allies, is never a desirable policy,” Mr. Cruz said in a statement Thursday.
White House officials said Mr. Trump’s policy proposal wasn't raised during Mr. Obama’s meeting with the Japanese and South Korean leaders. Ben Rhodes, a deputy national security adviser at the White House, said Mr. Trump’s suggestion “flies in the face of decades of bipartisan national security doctrine.”
“The entire premise of American foreign policy, as it relates to nuclear weapons for the last 70 years, has been focused on preventing the proliferation of nuclear weapons to additional states,” Mr. Rhodes said. “Frankly, it would be catastrophic were the United States to shift its position and indicate that we support somehow the proliferation of nuclear weapons to additional countries.”
Mr. Obama had made reducing nuclear proliferation one of his earliest goals in foreign policy. But his efforts have recently faced significant tests and he’s on track to leave office with a mixed legacy on the issue.
He secured a landmark deal with Iran last year aimed at curtailing its nuclear program in exchange for the lifting of economic sanctions. But that deal is controversial and could be derailed by a future Republican administration.
Meanwhile, the North Korea threat has intensified after several recent missile tests. And Russia, once seen as a critical ally in reducing the global nuclear weapons stockpile, is boycotting the summit after several years of strained relations with the U.S.
White House officials said the president’s meeting with Mr. Xi was critical to efforts in confronting the North Korea threat, because Beijing is seen as having the most influence with Pyongyang’s reclusive leadership.
The two leaders also planned to have a “candid exchange” on areas of disagreement, such as cybersecurity, human rights and maritime security concerns, Mr. Obama said. The biggest maritime concern between the nations is China’s claim to disputed territories in the South China Sea.
“As the two biggest economies, China and the U.S. have a responsibility to work together,” Mr. Obama said.

President Obama will meet with world leaders over a two-day summit aimed at stopping nuclear proliferation. WSJ's Jerry Seib discusses what to expect from the summit.
Ahead of the meeting, the U.S. and China also said that on April 22 they would sign a global climate accord reached in Paris in December by more than 190 nations. Senior Obama administration officials said the move should compel other countries to formally join the agreement and proceed with steps to cut carbon emissions. 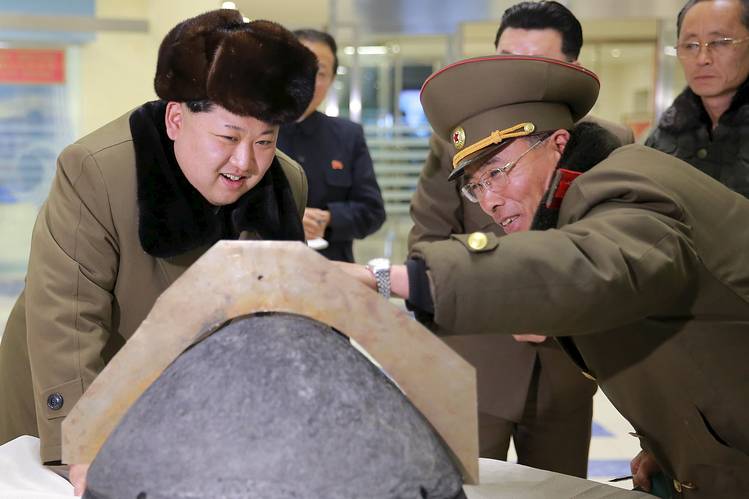 ENLARGE
North Korean leader Kim Jong Un recently examined a rocket warhead tip, in this photo released by the Korean Central News Agency. Photo: Reuters
”Our hope is that as that process proceeds, you will see growing momentum toward having this agreement enter into force early and swiftly,” said Brian Deese, a senior adviser to Mr. Obama.
While the Nuclear Security Summit, which will be Mr. Obama’s last before leaving office in January, is intended to broadly address proliferation, it is likely to be overshadowed on Friday by the threat of terrorism.
Mr. Obama plans to convene a special meeting with world leaders to address concerns that Islamic State militants could obtain nuclear weapons or radioactive material to make so-called dirty bombs and use them in attacks in urban areas.
The summit comes a week after bombings by Islamic State’s followers in Brussels killed 32 people and injured more than 300. Those attacks followed the deadly attacks in Paris in November.

Later Thursday, Mr. Obama was scheduled to meet with French President François Hollande.
On Capitol Hill, Mr. Obama is under pressure to go beyond talk and show he’s taking new steps to blunt Islamic State’s nuclear ambitions.
House Foreign Affairs Committee Chairman Ed Royce (R., Calif.) said in a written statement ahead of the summit that the issue of nuclear terrorism “must be a top priority for every nation.”

Email ThisBlogThis!Share to TwitterShare to FacebookShare to Pinterest
Labels: Obama Stresses a Need for Unity as Nuclear Summit Opens