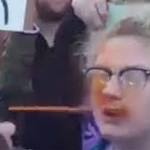 A 15-year-old girl was groped and then pepper sprayed in the face after pushing away her assailant outside a Donald Trump event in Wisconsin, authorities said.
QUIZ: WHO SAID IT? TRUMP, HITLER, MUSSOLINI, STALIN?
A vibrant orange spray of oleoresin capsicum blasted the girl in the face after she shoved a man who was packed among dozens of pro-Trump supporters shouting “All Lives Matters” outside the Janesville event Tuesday.
Janesville cops believe the pepper sprayer was a bearded man with glasses wearing a “Make America Great Again” hat seen in video footage. He was not immediately identified.
He watched a group confront a handful of protesters, including one woman hoisting a “Black Lives Matters” sign high above her head and the victim holding her own poster.
“Damn, Donald,” it read. “Back at it again w/the white supremacy.”

View Gallery New York Daily News front pages on the presidential election
The teen victim — identified on social media as “Alex” — was waiting in line for the campaign event when a man touched her inappropriately, Janesville Police Chief David Moore told WKOK-TV.
DONALD TRUMP CAMPAIGN MANAGER CHARGED FOR GRABBING REPORTER
"She reacted by pushing this male back and as she pushed the male back,” Moore explained. “Another person presented some pepper spray and sprayed her in the face.”
Multiple angles captured on cell phone video show the girl facing off with an older man with graying hair as the pepper spray-toting Trump supporter weaved through the crowd towards them.
The heated confrontation continued for about 40 seconds and at that point, she appears to sock the man in the face. The young man standing behind him reached over his shoulder with an apparent canister of pepper spray and hosed the teenager with the irritant.
She bolted through the crowd, rubbing at her face, while the man she argued with laughed with another Trump supporter. He later identified himself as Dan Crandall and denied groping the girl.
“I didn’t touch her,” Crandall told the Wisconsin State Journal.

No suspect information was immediately available as of early Tuesday, but authorities were seeking two men, one sought for the alleged sexual assault and the other accused of spraying the girl’s face.
Several officers escorted the anti-Trump protesters out of the crowd before coming to the girl’s aid. An officer was seen pouring a bottle of water on her face, washing away the fiery substance.
A video taken of the attack shows the alleged pepper sprayer sticking around for at least another minute before the footage shared to the Janesville Community page ended.
Trump was in the swing state for a town hall event at the hotel Tuesday evening, before Wisconsin primary voters go to the polls next week.
Several protesters hoisted signs reading “Dump Trump” outside the event, which featured a similar number of supporters wearing the billionaire GOP front-runner’s trademark red cap bearing his campaign slogan, “Make America Great Again.”
A woman wearing a burka held a sign reading “Why do you hate me?” in an apparent reference to Trump’s anti-Muslim rhetoric, which includes a plan to ban refugees from the Middle East.
The event comes hours after Trump’s campaign manager, Corey Lewandowski, was arrested for battery stemming from an altercation with a reporter earlier this month in Florida.
Earlier Tuesday, Wisconsin Gov. Scott Walker threw his support behind Ted Cruz in the race for GOP presidential nominee. Janesville is also the hometown of Republican House Speaker Paul Ryan.