The bottom is dropping out for Donald Trump. While Trump was never popular outside of his loyal slice of GOP voters, a raft of new polls show his national position hitting new lows, including with groups that are supposed to form his base.

Mar 31 2016, 4:29 pm ET
The bottom is dropping out for Donald Trump.
While Trump was never popular outside of his loyal slice of GOP voters, a raft of new polls show his national position hitting new lows, including with groups that are supposed to form his base.
America's widespread loathing for Trump puts further pressure on Republican delegates to deny him the nomination in July if he falls short of a majority, a move that would set off an ugly civil war but that some in the party believe would be necessary to stave off generational damage.
A collection of recent surveys by Real Clear Politics finds, on average, 30 percent of respondents hold a favorable view of Trump versus 63 percent who hold a negative one. Those numbers are roughly parallel to former President George W. Bush's approval ratings during his final months in office, which set the stage for President Barack Obama's landslide victory.

Democratic presidential front-runner Hillary Clinton leads Trump by double digits in at least six national polls in March, even as her own favorability ratings appear weak. Using 2008 as a reference point again, Obama's popular vote margin against Sen. John McCain was just more than 7 percent.
Larry Sabato's Crystal Ball, a nonpartisan election forecaster affiliated with the University of Virginia's Center for Politics, handicapped the general election based on the latest numbers and the results were not pretty for the GOP. According to their best guess, Democrats would begin a race against Trump with states totaling 347 electoral votes already solidly in their camp or leaning that way. They need 270 to win.
RELATED: Donald Trump holds surprise meeting with RNC in DC
Top Democratic strategists have warned that Trump could be a tougher out than he appears. His campaign has emphasized its strength with blue collar white voters, and some Clinton allies and labor officials have expressed concern that Rust Belt states like Pennsylvania, Ohio, Michigan, and Wisconsin might flip under the right circumstances.
Recent polls, however, strongly undermine the idea Trump has the kind of popularity needed to make that approach work. A Washington Post/ABC News poll early this month found a majority of non-college whites (52 percent) and white men (51 percent) disapproved of Trump — a shocking find given their importance to his coalition.
There are red flags at the state level as well. A Marquette University poll of Wisconsin voters this week found 70 percent of respondents disapproved of Trump. Clinton led Trump by 10 points, despite only tying Sen. Ted Cruz in the same poll.
Trump's numbers are horrific among black and Hispanic voters — two groups that the RNC argued the party needed to aggressively court in its autopsy of the 2012 election. Some Republican strategists have argued, however, that the GOP could still squeak by in 2016 by improving their margins with white votersalone.
That second option looks a lot harder, however, the more Trump exacerbates his already weak position with women.
The Post/ABC News survey found three-quarters of women held an unfavorable view of Trump — and that was before his campaign manager was charged with battery against a female reporter and Trump proposed "some form of punishment" for women who terminate a pregnancy should abortion be outlawed. An NBC News/Wall Street Journal poll the same month found 70 percent of women nationally held an unfavorable opinion of Trump.
For a worst case scenario, look no further than former Senate candidate Todd Akin who won just 39 percent of the total vote in red-leaning Missouri in 2012 after claiming women rarely get pregnant from"legitimate rape."
Trump's remarks on abortion Wednesday infuriated Republicans and pro-life activists who have spent years trying to train candidates to avoid inflammatory rhetoric and positions around the issue. Trumpwalked back his comments the same day, but his frequent blow-ups are heightening fears within the GOP that Republicans down the ballot will spend the entire election reacting to his stumbles.
RELATED: Why Trump's controversies matter for all Republicans
For the first time this cycle, some analysts are suggesting the Republican House majority — commonly thought to be impregnable until at least 2022 thanks to GOP-friendly maps — could come into play if Trump's numbers were to hold and the party fractured over his candidacy. As for the Senate, Democrats started the year on offense thanks to an outsize number of vulnerable GOP seats and it's hard to imagine the majority not changing hands in a crushing Trump defeat. 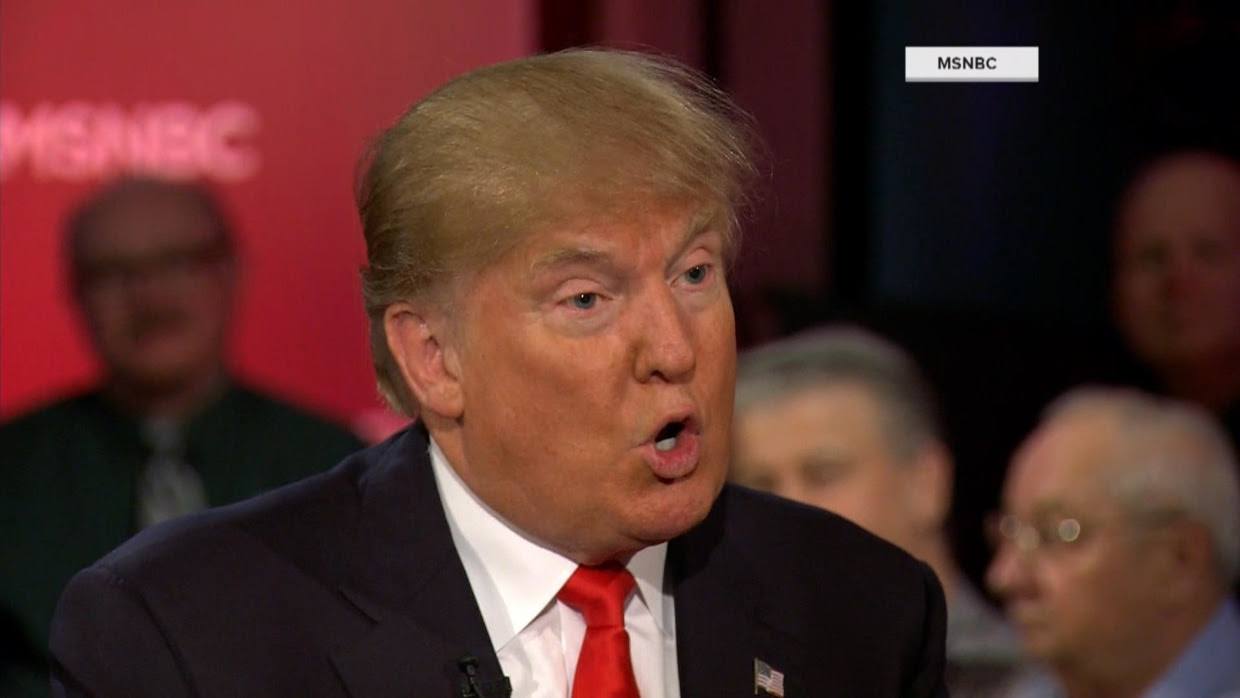 Trump's controversial nuclear plan draws criticism of 'arms race' strategy 2:11
Adding to Republican woes, Obama's approval rating has been perking up and is now consistently in positive territory for the first time since early in his second term. With unemployment at less than 5 percent, gas prices low, and the economy growing at a steady pace, the environment looks more favorable for Democrats than might have been expected even a few months ago.
There's still a decent chance Trump will not be the nominee. He's unlikely to win a contested convention thanks to his weak support among party leaders and a complicated set of delegate rules that make it hard for him to pack the room with loyal supporters.
Such a move would come with its own downsides, however. Trump has predicted "riots" from his supporters if he loses, and it seems highly likely he would direct his voters to not support the Republican nominee in November. That would likely do fatal damage to someone like Cruz, whose path to victory is difficult enough without Trump undermining him.
This would normally be the point in an article where all the caveats are listed: It's early, maybe Trump can improve his standing with voters, perhaps he can heal rifts within the GOP by November, etc.
Unlike past candidates, however, Trump is almost universally well known at this point and respondents to polls indicate strong feelings about his candidacy. He's also yet to weather any attacks from the left, where Democrats are preparing a massive campaign to drag him down in ways that his Republican rivals cannot. Unless something big changes, Trump could cross a point of no return well before the Republican convention takes place.
This article originally appeared on MSNBC.com.