The Supreme Court of the U.S. exists primarily to make most laws in the 50 states congruent on basic levels with each other. Otherwise, when people travel from state to state they would have no idea at all what to expect from state to state. On some levels states ARE very different in their laws and minimum wages from $5 to $10 an hour to the now proposed $15 an hour potentially in California.

So, what is happening right now is dangerous for our Union of States here in the United States.

WASHINGTON—Tuesday's split in a union-dues case highlights the practical difficulties facing an eight-member Supreme Court, as well as the stakes for the political parties as they battle over who will get to appoint a ninth justice.
Labor Unions Get A Big Supreme Court Victory Thanks To Mitch McConnell's Obstruction
Atkins: Split court gives unions a win
The Court's Close Call on Unions 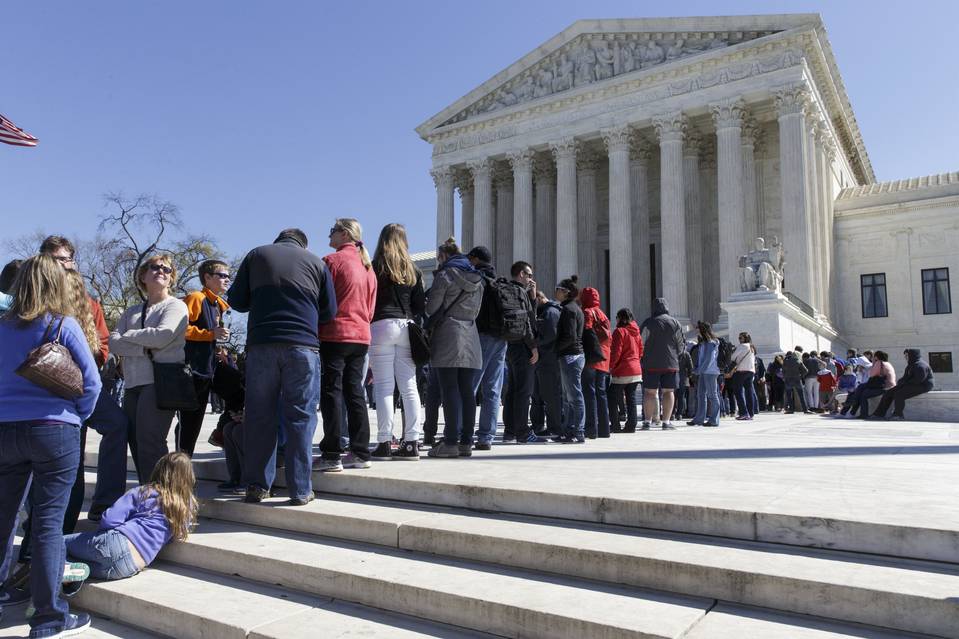 ENLARGE
Visitors wait on the plaza of the Supreme Court in Washington on Tuesday, as the justices split 4-4. Photo: J. Scott Applewhite/Associated Press
By
Brent Kendall and
Jess Bravin
March 29, 2016 2:36 p.m. ET
10 COMMENTS
WASHINGTON—Tuesday’s split in a union-dues case highlights the practical difficulties facing an eight-member Supreme Court, as well as the stakes for the political parties as they battle over who will get to appoint a ninth justice.
Tie votes prevent the high court from fully executing its duty to set legal rules and precedent for the entire nation. While the court often decides cases on lopsided votes, about a fifth of its rulings in recent years have come on 5-4 tallies. Such cases now face the prospect of deadlock—as happened in the challenge to laws allowing mandatory union fees for all public workers—or of being decided with narrower opinions that avoid more difficult legal questions.
The deadlocks can be a particular problem when lower courts are in conflict on what the law means. That was the circumstance last week when the court announced its first 4-4 split, in a banking case about the Equal Credit Opportunity Act. Federal appeals courts had reached different conclusions about the legal issue in the case. Because the Supreme Court was unable to resolve the disagreement, parts of the country are operating under different legal rules.
The deadlock in Tuesday’s union dues case underscores how much one justice can affect the direction of decision making on a closely divided court. It also shows why most Republicans have fought so hard to keep President Barack Obama from filling the current vacancy: A tie can be better than losing.
Justice Antonin Scalia died in February. President Barack Obama nominated Judge Merrick Garland to fill the opening, but Senate Republicans have said they won’t hold hearings or a vote on any court nominee until a new president is elected.

During oral arguments in January, the court’s five conservative justices, including Justice Scalia, appeared poised to overturn a 1977 decision allowing public-employee unions to collect dues from workers for collective bargaining costs. Indeed, conservative Justice Samuel Alito in a 2014 ruling all but invited a challenge to the nearly 40-year-old precedent.
The 4-4 deadlock means the status quo remains in place: Unions can collect the dues. But the tie means the case sets no new precedent, which in the long run could be better for Republicans than if a 5-4 court with a new Obama-appointed justice had issued a full merits opinion again endorsing public-sector unions’ right to collect the dues.
Justice Scalia’s absence likely will affect other cases currently before the court, including voting-rights appeals brought by conservatives that are unlikely to prevail without his vote. One of the voting suits seeks to upend a half century’s practice in the allocation of state legislative seats, which since a series of landmark cases in the 1960s have almost always been based on equal division of a state’s total population into electoral districts.
Justice Scalia also had been expected to support a Texas law imposing regulations on abortion providers that abortion-rights groups said would force most the state’s clinics to close. If the court divides 4-4 on the case, it will leave different constitutional standards in place in different parts of the country.
Another closely watched case, involving affirmative action in university admissions, is less likely to be affected by Justice Scalia’s death, because Justice Elena Kagan, who had worked on the case while a Justice Department official, has recused herself.
As a result, a seven-member court will decide whether the University of Texas at Austin was justified in using racial preferences to achieve diversity in its freshman class. With three liberals apparently supportive of the university and an equal number of conservatives skeptical, the outcome may rest with Justice Anthony Kennedy, who has approved of diversity as a compelling interest but been critical of government programs that label individuals by race.
Write to Brent Kendall at brent.kendall@wsj.com and Jess Bravin at jess.bravin@wsj.com

Email ThisBlogThis!Share to TwitterShare to FacebookShare to Pinterest
Labels: Supreme Court's 4-4 splits may break the states into 50 different countries eventually