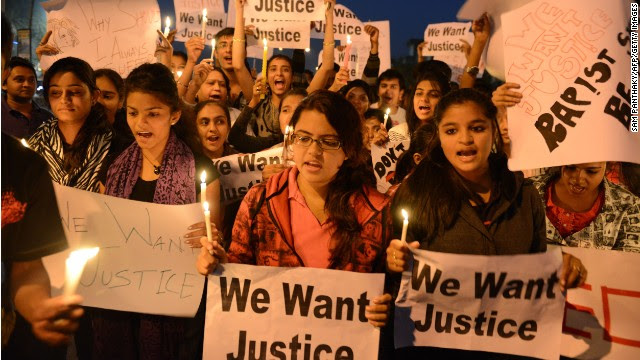 Do women feel safe in India?

Angry villagers surrounded the bodies for hours when they were found Wednesday, accusing police of siding with the suspects and blocking them from taking the girls down.
The allegations fueled anger in the community, but calm was restored after authorities promised to take action.
The arrests of a police constable and another man on Friday night bring the number of suspects in custody to five, authorities said.
All five men -- three brothers and two police officers -- are facing rape and murder charges, said R.K.S. Rathore, a senior police officer.
More charges
In addition to the rape and murder charges, the police officers have been charged with conspiracy in the crime and negligence of duty, but the prosecution may review the counts as the investigation progresses, he said.
The shocking attack on the cousins ages 14 and 16 sparked outrage in Katra Sadatganj village and beyond.
A photo from the village in Uttar Pradesh state showed the body of one girl, dressed in a green tunic and pants, hanging from the tree. A crowd that included young children gathered around the grisly scene.
Police said an autopsy confirmed the girls had been raped and strangled. They were cremated Wednesday night in line with Hindu customs, said Mukesh Saxena, a local police official.
Police under scrutiny
The girls were out in the orchard relieving themselves Tuesday night when the attackers grabbed them, authorities said.
Some people saw the abduction, but were unable to stop it, Saxena said, citing eyewitnesses.
The victims' relatives accused local police of failing to respond and siding with the suspects when the parents reported the case. The allegations have fueled anger among the villagers.
'Endemic' violence
The horrific gang rape and murder of a 23-year-old woman in New Delhi in late 2012 shook India, focusing sharp attention on violent crimes against women in the country, the world's second most populous after China.
The case prompted protests in many cities, soul-searching in the media and changes to the law. But shocking instances of sexual violence continue to come to light.
"Laws can only do so much when you have to end something which is as endemic and as entrenched as violence against women," said Divya Iyer, a senior researcher for Amnesty International in Bangalore, India.
The country's new Prime Minister, Narendra Modi, has said he wants to take steps to ensure women are safe, particularly in rural India. But women's rights groups have criticized what they say is a lack of specific proposals to tackle the problem, suggesting gender inequality doesn't appear to be high on his list of priorities.
CNN's Harmeet Shah Singh reported from New Delhi, and Faith Karimi reported and wrote from Atlanta. CNN's Jethro Mullen contributed to this report
end quote from:

Email ThisBlogThis!Share to TwitterShare to FacebookShare to Pinterest
Labels: 2 girls left hanging from a Mango Tree in India after being gang raped