WASHINGTON - Eric Shinseki resigned as secretary of the Department of Veterans Affairs on Friday, leaving behind a sprawling bureaucracy embroiled in scandal and burdened with a decades-old legacy of overwhelmed facilities and management failures ...
Quotations in the News
Resignation a change in Obama's approach
Was Obama Right to Accept Eric Shinseki's Resignation? - by Teresa Welsh
Eric Shinseki

By Michael D. Shear and Richard A. Oppel Jr. 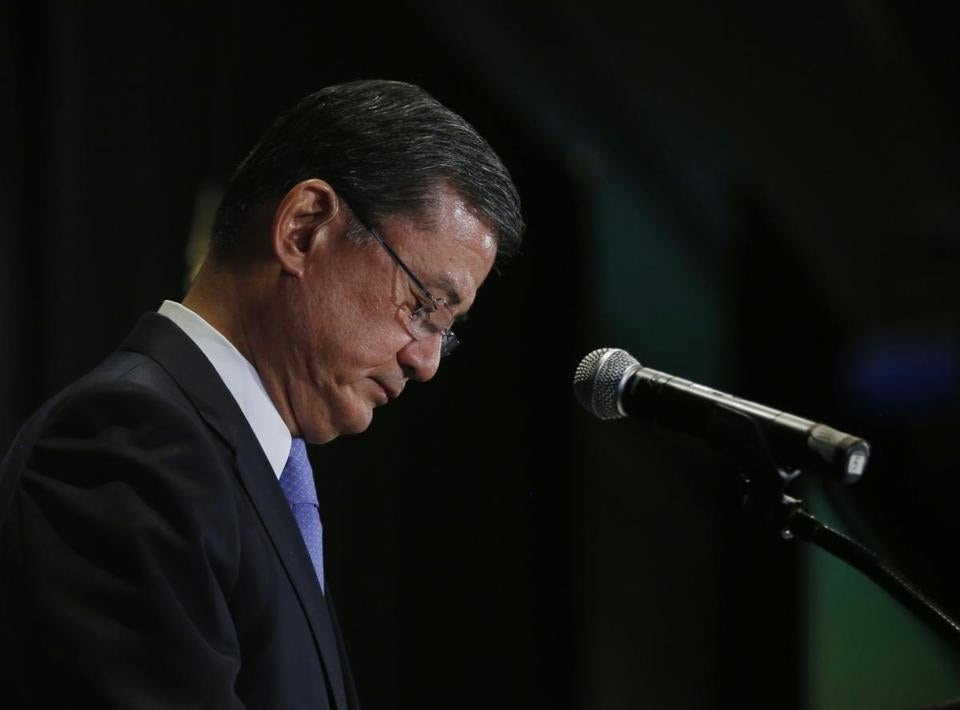 WASHINGTON — Eric Shinseki resigned as secretary of the Department of Veterans Affairs on Friday, leaving behind a sprawling bureaucracy embroiled in scandal and burdened with a decades-old legacy of overwhelmed facilities and management failures that his successor must now confront.
President Obama announced Shinseki’s departure after a 45-minute Oval Office meeting between the two men that ended a week of mounting demands from both parties for the secretary to step down. Obama, who appeared pained at the turn of events, hailed Shinseki as having an unquestioned commitment to the nation’s veterans, but he said the political storm had made Shinseki’s continuing leadership untenable.
“We don’t have time for distractions,” Obama said. “We need to fix the problem.”
Fixing the problem at the department now becomes an urgent political matter for the president, once again raising questions about whether the candidate who pledged in 2008 and 2012 to make government work efficiently has lost grasp of the government he now leads.
The department’s troubles, however, remain a far more serious concern for the millions of veterans whose access to timely health care has been steadily eroding as waves of wounded soldiers from Iraq and Afghanistan have converged with those who returned from earlier wars.
Most of the veterans now seeking treatment at department facilities are aging Vietnam-era service members, many with chronic illnesses like diabetes that require long-term care or with cancer and cardiovascular disease that require complicated and expensive treatment. Veterans of Iraq and Afghanistan are further straining the system with mental health problems like post-traumatic stress disorder.
Veterans’ demand for medical services is soaring. The number of outpatient visits to VA health care facilities has grown 26 percent over the past five years, to 94.6 million in the current fiscal year, according to the department. Over the same period, the number of staff doctors and nurses has grown 18 percent. The effort to resolve the fundamental problems at the department will also play out in Congress, where Republicans say the problem is not a lack of money — the department’s $154 billion annual budget has more than doubled since 2006 — but rather inefficiencies in the delivery of care. Democrats say the problem is a serious shortage of doctors and not enough hospitals.
“This is going to be a slow grind,” a senior administration official said of the need to overhaul the department. “A lot of the problems, they are not just systemic, but they are chronic. It’s like, roll up your sleeves, start digging into the culture, and get rid of people who are impeding necessary change.”
“It won’t be pretty,” said the official, who asked for anonymity to be blunt about the challenge facing Obama in the months ahead.
One immediate question is whether the firing of Shinseki will have any real impact on the agency’s deep-seated problems. Shinseki apologized in a speech Friday morning, before Obama accepted his resignation, saying that he was “too trusting” of some people working for him. He criticized a “systemic, totally unacceptable lack of integrity” at some veterans health care centers that he said he could not explain. Defenders of Shinseki point out that problems at the Veterans Affairs Department, the country’s largest health care system, were far worse during the Vietnam era. Despite the current problems, many veterans say that the quality of care delivered — once they are able to get into the system — is much better today.
In addition, the veterans agency has a history of innovation in its health care programs, including advances in the treatment of spinal cord injuries, improvements in artificial limbs, increased use of electronic health records, and the investigation of medical errors.
But the problems described Friday in an internal audit are remarkably similar to those documented six years ago in a report to the department by Booz Allen Hamilton, the management consulting company. The Booz Allen report found “chronic delays in care” at veterans hospitals and clinics, resulting in part from “the current shortage of nurses, nurse practitioners, primary care providers, and specialty physicians.”
Shinseki had been challenged by some of those problems during his five years at the department’s helm. A year ago, he and Obama had what aides described as a “come to Jesus” meeting in which the president demanded that Shinseki deal with a huge backlog of disability claims that were delaying benefits to veterans.
But the recent allegations that officials manipulated waiting lists for thousands of veterans across the country exposed even bigger issues. The department’s internal audit, which Shinseki presented to the president Friday, attributed the scheduling scandal to the agency’s “overarching environment and culture which allowed this state of practice to take root.”
The audit said the department’s culture “must be confronted head-on if it is to evolve to be more capable of adjusting systems, leadership and resources to meet the needs of veterans and families.”
end quote from:

Nothing at all is going to change because the problem never was Shinseki. The problem is funding and All Republicans and some Democrats are never going to give the VA the funding it needs. And if there isn't enough funding this "hide the patient"

game is going to go on for years and years. I listened to a disabled vet talk on PBS radio about how bad it has been since 1987 trying to get care. Nothing has really changed since then except the number of patients has dramatically increased. It is about funding only. They don't have money to pay for all the appointments so some people just die instead.