Los Angeles Clippers owner Donald Sterling does not have the authority to stop a $2 billion sale of his team because he has been determined to be mentally unfit to make decisions related to the family trust, a person familiar with the situation told USA TODAY ...
AP Source: Former Microsoft CEO wins LA Clippers bid
Ballmer agrees to $2B deal to buy Clippers - by Dan Woike
Sources: Ballmer agrees to buy Clippers for record $2 billion
Column Stunned by Clippers deal's dollars, wondering how it makes sense
NBA dreams seem further away 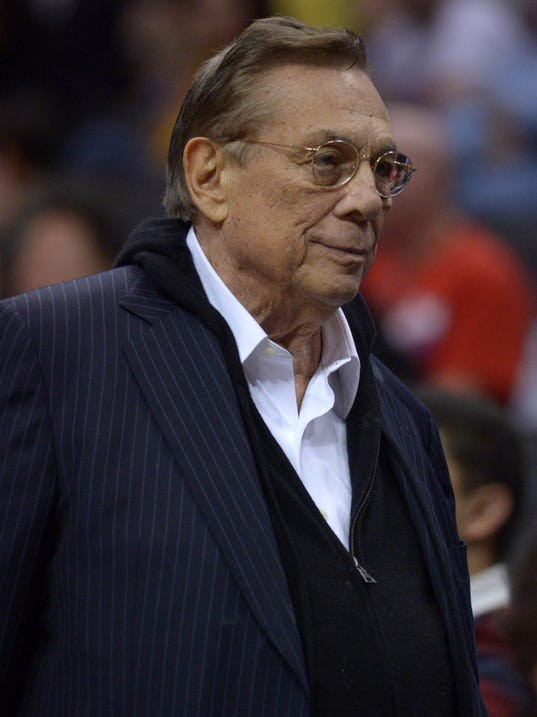 (Photo: Kirby Lee, USA TODAY Sports)
48 CONNECT 55 TWEET 2 LINKEDIN 3 COMMENTEMAILMORE
Los Angeles Clippers owner Donald Sterling does not have the authority to stop a $2 billion sale of his team because he has been determined to be mentally unfit to make decisions related to the family trust, a person familiar with the situation told USA TODAY Sports.
The Sterling Family Trust owns the team, with Donald and his wife Shelly each owning a 50% share. The trust spells out provisions and procedures related to the mental capacity of the trustees, and Donald Sterling did not meet the standard in a determination by experts, giving his wife sole decision-making power for the trust, the person said.
Shelly Sterling reached a deal Thursday with former Microsoft CEO Steve Ballmer to sell the Clippers for a record $2 billion. The contract was sent to the NBA for approval a few days before the league's Board of Governors was set to vote on whether to terminate the Sterlings' ownership of the team.
BALLMER: Details on record-setting sale
ARMOUR: $2 billion too much for Clippers
As part of the deal, Ballmer gets 100% of the team, though Shelly Sterling still could be involved in the franchise in some other capacity, the person said.
Donald Sterling's attorneys didn't return calls Thursday night from USA TODAY Sports. After Sterling authorized his wife in writing last week to sell the team on his behalf, his attorney this week said he had reversed course, did not want to sell and instead wanted to fight the NBA, which banned him for life on April 29.
But Shelly Sterling continued to entertain offers for the team even as her husband's attorney said he did not want to sell.
Now it's up to the league to approve the deal and possible further battles with Donald Sterling, if he chooses to fight to keep the team he bought in 1981 for about $12 million
GALLERY: Donald Sterling through the years

FacebookTwitterGoogle+LinkedIn
Clippers owner Donald Sterling through the years
Fullscreen
Longtime Clippers owner Donald Sterling, shown in 2010, has been banned by the NBA. Flip through this gallery for more of Sterling.  Mark J. Terrill, AP
Married more than 50 years, Donald and Shelly Sterling said they are separated but have not filed for divorce. Their marriage and ownership of the Clippers has become a nearly daily public issue since last month, when a recording of Donald Sterling was leaked to the gossip site TMZ. In the recording, he is heard making racially charged remarks about African-Americans in a private conversation with his female companion, V. Stiviano.
While acknowledging his comments were "uneducated" and "hurtful," Donald Sterling said the recording was made without his consent and therefore was illegal and could not be used against him in any proceeding. It's not clear who leaked the recording, but it might have been prompted by a lawsuit against Stiviano filed by Shelly Sterling, who sought the return of assets given to Stiviano from her husband.
After the recording became public, NBA Commissioner Adam Silver banned Donald Sterling for life, fined him $2.5 million and said he would move to force a sale of the team. Silver said the ban only applied to Donald Sterling but that he wished the entire Sterling fan ousted from Clippers ownership.
Donald Sterling even sent a scathing 32-page letter Tuesday to the NBA in response to league charges that he broke league rules by making racially charged comments in a recorded private conversation with his female companion last September.
Brent Schrotenboer is an investigative and enterprise reporter for USA TODAY Sports. Contact him on Twitter or via e-mail.
end quote from: