The Dharani of Chintamani: related to the Buddhist and Hindu Philosopher's Stone

The equivalent of the philosophers' stone in Buddhism and Hinduism is the Cintamani.[11]
In Buddhism, Chintamani is held by the bodhisattvas, Avalokiteshvara and Ksitigarbha. It is also seen carried upon the back of the Lung ta (wind horse) which is depicted on Tibetan prayer flags. By reciting the Dharani of Chintamani, Buddhist tradition maintains that one attains the Wisdom of Buddhas, is able to understand the truth of the Buddhas, and turns afflictions into Bodhi. It is said to allow one to see the Holy Retinue of Amitabha and his assembly upon one's deathbed. In Tibetan Buddhist tradition the Chintamani is sometimes depicted as a luminous pearl and is in the possession of several of different forms of the Buddha.[12] 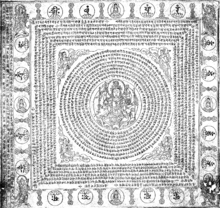 The word dhāraṇī derives from a Sanskrit root dh.r which means "to hold or maintain".[1]
Ryuichi Abe and Jan Nattier suggest that a dhāraṇī is generally understood as a mnemonic device which encapsulates the meaning of a section or chapter of a sutra.[2] Dhāraṇīs are also considered to protect the one who chants them from malign influences and calamities.

The distinction between dhāraṇī and mantra is a difficult one to make. One can say that all mantras are dhāraṇīs but all dhāraṇīs are not necessarily mantras. Mantras are generally shorter. Both tend to contain a number of phonic fragments such as Om (or Hum) that either have lesser-known meanings, or are unintelligible.
Some dhāraṇīs are found in the Pali Canon,[citation needed] but mantras are not. Dharani are the ancient Yogic Methods to be free from calamities such as dissolution of Universe. They are the most powerful. Dharani as told by Bushunda to Rishi Vasishtha that the Dharani's he uses to be immortal and be free from the dissolution of the Universe. A clear understanding of Dharani meditation reveals that the person gets free from cycles of birth and deaths forever and truly. So Dharani are meditation methods like Parvati Dharani, Varuni Dharani, Vayu Dharani etc. are all powerful ways to beget the ill effects of dissolution.

The Japanese Buddhist monk Kūkai drew a distinction between dhāraṇī and mantra and used it as the basis of his theory of language. Kūkai claims that mantra is restricted to esoteric Buddhist practice whereas dhāraṇī is found in both esoteric and exoteric ritual.
Kūkai classified mantras as a special class of dhāraṇīs and argued that every syllable of a dhāraṇī was a manifestation of the true nature of reality – in Buddhist terms, that all sound is a manifestation of śūnyatā or emptiness of self-nature. Thus, rather than being devoid of meaning, Kūkai suggests that dhāraṇīs are in fact saturated with meaning – every syllable is symbolic on multiple levels.

According to Red Pine, mantra and dharani were originally interchangeable, but at some point dhāraṇī came to be used for meaningful, intelligible phrases, and mantra for syllabic formulae which are not meant to be understood.[3] Jan Nattier writes that, whereas mantra has ancient Hindu usage back to the Vedas, dhāraṇī does not predate Buddhism.[4]


This following button also takes you back to another wikipedia article related to this one:

en.wikipedia.org/wiki/Cintamani
Wikipedia
By reciting the Dharani of Cintamani, Buddhist tradition maintains that one attains the Wisdom of Buddha, able to understand the truth of the Buddha, and turn ...
‎Nomenclature, orthography and ... - ‎History - ‎Popular culture - ‎See also

In understanding that by reciting the Dharani of Cintamani one attains the Wisdom of Buddha and able to understand the truth of the Buddha , and turn afflictions into Bodhi.

Note: I have been experiencing the above statement ever since my first Tibetan Buddhist initiation: "The Thousand Buddhas Empowerment". My sign that this was beginning was that when I walked into the initiation place where about 100 people were attending for the Empowerment with a Tibetan Lama there, I suddenly was two places at once. In other words I was a human being there in Ashland and I was simultaneously in another body in another time (likely as a cave yogi) with this same Lama possibly around the year 1500 in Tibet. I was wearing only a loincloth and it was springtime (which likely would be summer in the Himalayas). So, I almost fainted from being two places at once in different times. However, never having experienced anything like this before while walking around in a body I realized this was my path.

The statement "Turning afflictions into Bodhi" would also translate as turning your troubles and illnesses into Healing and Grace. This I have also experienced ongoing since I embarked on the path of Compassion for all beings in the universe and myself. The more I have dedicated myself to a path of compassion for all beings including myself the more powerful and amazing my life has become towards experiences of Grace and Blessing in my life.

It isn't an easy path but it is a very long and fulfilling one in that you witness the positive changes to your own life and all lives around you as you become more and more compassionate and efficient in practicing compassion towards all life in the universe including yourself.

Also, there are no conflicts between being a Mystical Christian and being an empowered Tibetan Buddhist practitioner because to Christians Buddhism is not a religion but a philosophy and also to Tibetan Buddhists there are 49,000 correct paths to enlightenment including the paths of all major religions on earth.

Email ThisBlogThis!Share to TwitterShare to FacebookShare to Pinterest
Labels: The Dharani of Chintamani: related to the Buddhist and Hindu Philosopher's Stone