Washington (CNN) -- The truck was loaded with munitions, then driven up a hillside in northern Syria. Moments later, there was a massive blast followed by cries of "Allahu Akbar," or "God is great" in Arabic, and the rattling of gunfire.
Suicide Bomber Is Identified as a Florida Man
American who killed himself in Syria suicide attack was from South Florida
American became suicide bomber in Syria for Nusra Front
SHARE THIS

U.S.: Jihadi featured in suicide bombing video in Syria grew up in Florida 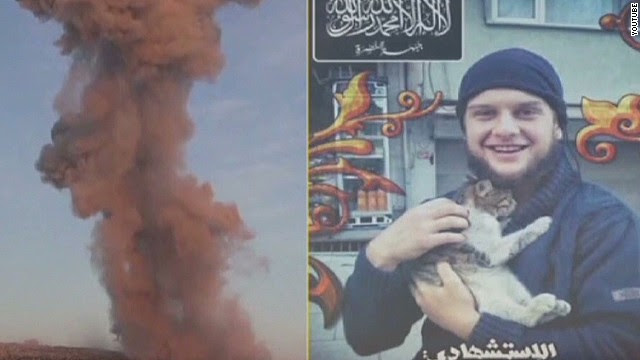 STORY HIGHLIGHTS
Washington (CNN) -- The truck was loaded with munitions, then driven up a hillside in northern Syria. Moments later, there was a massive blast followed by cries of "Allahu Akbar," or "God is great" in Arabic, and the rattling of gunfire.

What made this suicide bombing stand out was not that it happened -- as such attacks have become fairly commonplace in war-torn Syria -- but the identity of one of the men who carried out.
He was American.
In an online video and social media, radical Islamists claiming responsibility for the blast touted one of the attackers as Abu Hurayra Al-Amriki, an American.
Late Thursday, two U.S. officials confirmed their boast.
The man was a U.S. citizen who grew up in Florida and went to school there. Investigators are interviewing family members.
U.S. State Department spokeswoman Jen Psaki said Friday evening the American is believed to be Moner Mohammad Abu-Salha.
Whichever name one uses -- Abu-Salha or Al-Amriki -- he was among a group of Americans whom intelligence agents have been trying to keep tabs on since they went to Syria some months ago to join extremists in the fight against the Syrian government.
Smiling, holding a cat
Abu Farouk al Shamy, a spokesman for the rebel Suqour al-Sham battalion, told CNN that the Sunday attack was executed in coordination with the al-Nusra Front, an al Qaeda-linked organization that the U.S. government has blacklisted as a foreign terror organization.
One video on YouTube, with the title "the American martyrdom from al-Nusra Front," identifies the suicide bomber as Abu Hurayra Al-Amriki. This video and several other social media posts feature a picture of a bearded man with that name, smiling and holding a cat.
Al-Amriki in Arabic means "the American." The name Abu Hurayra, which is popular among Sunni Muslims, offers little clue as to the man's identity. Abu Hurayra was a companion of the Islamic prophet Mohammed and the narrator of Hadith.
Syrian activists say the video is from Sunday and shows militants' preparations and ultimate attack on Syrian military checkpoints in Jabal Al-Arba'een, near the city of Ariha in Idlib province and believed to be along a key rebel supply route.
According to Syrian activists and social media postings, four vehicles laden with explosives were part of the attack. One YouTube video says the American detonated the biggest one, which contained 17 tons of explosives, including artillery shells. It is not clear what exactly this man's involvement was, including whether he was driving an armored truck, a tanker or some other vehicle.
Islamists praise the American
Even if he clearly did not act alone, it is the man identified as Abu Hurayra who has gotten a lot of attention on websites and social media venues tied to radical Islamists.
That includes a tweet by a man with the handle Abu Suleiman al-Muhajer, whose bio identifies him as belonging to al Qaeda in the Levant, the umbrella organization for the al-Nusra Front.
His tweet, which was published on the radical Islamist website Hanein, features the alleged American's picture and the words, "Abu Hurayra Al-Amriki performed a martyrdom operation in Idlib, Jabal Al-Arba'een. May Allah accept him."
On the heels of this suicide attack, counterterrorism officials are focusing on young Americans who head off to wage war in the embattled Middle Eastern nation, U.S. officials told CNN.
U.S. authorities are investigating a network of recruiters who officials believe are funneling money and young fighters to Syria, the officials said. Their aim is to stop the flow of money and recruits to Syria.
U.S. intelligence and law enforcement officials have expressed concerns about Americans joining the fight in Syria, including with groups like the jihadist al-Nusra Front. The worry is that they and other Westerners might pose a threat when they return a home, or perhaps end up targeting Europe or Western interests in the Middle East.
"There's going to be a diaspora out of Syria," FBI Director James Comey said last week. "And we are determined not to let lines be drawn from Syria today to a future 9/11."
U.S. closer to expanding training for Syrian rebels

However, this is much more complex than is shown above. I wrote about the complexity of issues like this in this blog article:An American Suicide Bomber in Syria Against Assad?...

In it I explain why this is so complex a subject. Also, in addition to this the U.S. doesn't want Americans fighting Assad in an obvious way because that could trigger potentially a nuclear war if this person was found to be part of the U.S. military. So, only CIA types of agents likely would be found in Syria just like only FSA (KGB) types of hired agents and hired thugs from Chechnya and places like that would be in Ukraine. Russia doesn't want to start a nuclear war either with Europe or the United States.

Email ThisBlogThis!Share to TwitterShare to FacebookShare to Pinterest
Labels: US: Jihadi featured in suicide bombing video in Syria grew up in Florida