I found that people were visiting this article today. As I read it I found it imbued with the consciousness of Saint Germain, Jesus and their angels so I thought I would share it with you again in the hopes it would lift your spirits today on Memorial Day 2014 or whenever you read this.

It's amazing when these kinds of experiences happen. Out of the blue a whole lot of people were visiting this article that I compiled from information I had found online about "The IAM Activity that I was born into and lived in until I was 21 in 1969.

The "I AM" Activity

So, it seemed interesting to me that so many different people would be reading about this. So, finally I wanted to develop this article more so I did last night and feel more satisfied with it than before. I found myself in my bedroom writing and a presence of Saint Germain came into the room. If you have had "Oceanic Experiences" before yourself you know that these experiences are like no other. Since my memories of these kinds of experiences go back to when I was 2 years old when Archangel Michael appeared in the room when I was 2 and healed me of whooping cough when I was dying it is important to understand that it is ALWAYS an extremely transformative experience for anyone when something like this happens. I have learned over the years to stay very centered and to let the experiences wash over me and cleanse my aura and being sort of like letting the waves wash over me when I am swimming in the ocean in southern California or Hawaii at the ocean rather than letting the waves knock me down. If one is not afraid and instead deeply at peace these kinds of experiences are amazing in the extreme in how they move someone "or a whole group of people or a nation or a world forward".

Saint Germain is sometimes called "The God of Freedom" by some. It is said he was there at the signing of the "Declaration of Independence" and inspired "John Hancock" to sign first large after which all the others signed the "Declaration of Independence" even though many of they and their families died because of signing this document. We have him and all of them to thank for the good old USA ever since.

Saint Germain got me up at 3:45 AM and I heard his angels say, "Write about Saint Germain" I kept hearing this over and over again as I woke up early. So I am. I have always seen Jesus as the God of Grace and forgiveness and Saint Germain as the God of Freedom. Since he is known to be Sir Francis Bacon the father of the Scientific Method who eventually became the man who never died through the Philosopher's stone it is always a very interesting thought. Since one of Saint Germain's incarnations was Joseph, the father of Jesus, I have always seen Saint Germain and Jesus as brother souls in their work for mankind down through the ages. Some of Saint Germain's other known incarnations were: Merlin, Leonardo Da Vinci, and many others past, present and future. Though growing up into the "I Am" religion was a very difficult experience for me because it was so different than what most other people believed as I grew up in San Diego and Los Angeles from age 4, I also have realized over time that I was being trained on my path to enlightenment through many intense near death experiences throughout my life to write for mankind in the past, present and future. Many people might have amazing experiences like mine but are too afraid to write about them. However, I appear to have been trained by God and Jesus and Saint Germain since before my present birth to not only have these experiences but to also write about them for all mankind now and in the future and in the past. My spiritual path has taken me throughout the U.S., Canada, Europe, Hawaii, and Asia, especially India and Nepal, and Thailand to find out all I have come to understand about Saint Germain. One time in the little town of Rewalsar, India Saint Germain turned the sky purple and had violet Lightning crash to the ground for one hour or more through the Purple Rain in answer to my question. I presently believe that when he was Merlin he was also known as Padmasambhava who brought Buddhism to Tibet as a Mahasiddha from Nalanda University in India at that time. It is said that Padmasambhava had pink skin the way that one would describe in that era a person from Nordic European regions, even though others say he was born in Afghanistan. However, with the Violet Lightning and purple sky and rain and an audience with a Local Lama at that point in his Monastery I realized he was showing me the way. Later that Tibetan Lama came to Mount Shasta, California where I lived about 5 years later and gave about 100 of us a DzogChen initiation which is one of the most powerful Tibetan Buddhist initiations along with the Kalachakra Tantra which I received from the Dalai Lama along with 500,000 others in Bodhgaya, India where Buddha became enlightened under the Bodhi tree 2500 years ago. So, Saint Germain has intuitively led me all over the world to follow in his and Jesus' footsteps so that I could write for you here and now. So when his angels asked me to get up and "Write about Saint Germain" at 3:45 AM I did.

I had another amazing experience that took me back to the time of King Arthur and Merlin when I was in Glastonbury, England last October with my wife and two daughters and my older daughter's boyfriend. I was trying to get us to Glastonbury Tull but the roads were closed where I wanted to Go. So, we parked in a parking lot in the middle of town where tour buses parked too. I looked over the fence and saw ruins of a castle or abbey and soon found out that this was Glastonbury Abbey right in the middle of the town Glastonbury, England. We all paid to go into see it because now it is a park. But in the process we found the grave of King Arthur which once again takes us back to the days of Merlin and Padmasambhava. This is a picture of some of the ruins of Glastonbury Abbey. Glastonbury Abbey is on the Isle of Avalon. In King Arthur's time there was more rain than now and Glastonbury was surrounded by water by a lake. However, most of the time except when there are floods the lake area is now a beautiful farming and sheep area surrounding Glastonbury town, Abbey and Tor. As you look below the photo on top is what the lake looks like now. The second photo is of Glastonbury Tor with the castle like looking object on the top with the sheep further down on the Tor or hill. And the Third Photo is taken of the ruins of Glastonbury Abbey that was ransacked during the time of King Henry VIII when King Arthur's grave was desecrated. Up until the  time of King Henry VIII, Glastonbury Abbey was the richest Abbey in England because it was on the magical Isle of Avalon with the Grave of King Arthur with all the ancient histories and legends intact.

Also, the Tor is the site of where  Joseph of Arimathea  put the Holy Grail of Jesus. If you are sensitive or an intuitive like me, you can feel the spiritual power of this place which reminds me a lot of the spiritual power whenever Saint Germain is around. I begin to notice the incredible clarity of thought about 20 to 30 miles away. Also, another amazing place to visit is Avebury, England where you can walk up to and touch about 500 standing stones still in place from thousands of years ago over a large area of fields and sheep there. 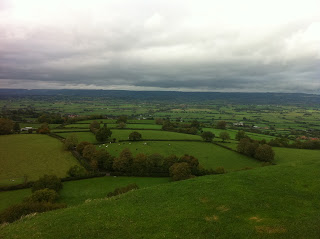 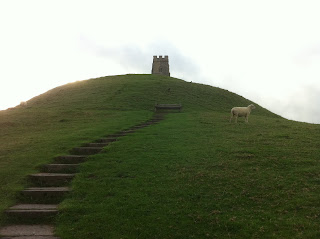 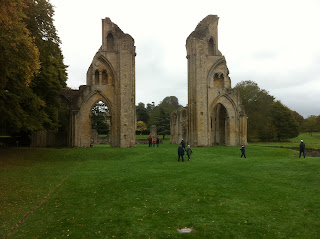