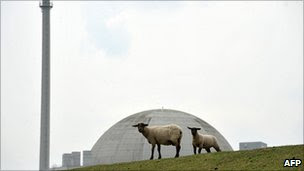 German Chancellor Angela Merkel has said a decision to phase out nuclear power by 2022 can make her country a trailblazer in renewable energy.
Ms Merkel said Germany would reap economic benefits from the move.
Germany is the biggest industrial power to renounce nuclear energy, in a policy reversal for the governing centre-right coalition.
Mrs Merkel set up a panel to review nuclear power following the crisis at Fukushima in Japan.
The crisis, triggered by an earthquake and tsunami in March, led to mass anti-nuclear protests across Germany. end quote.

This is a giant step forward I believe. It will make every country that uses nuclear power for generating electricity think of the actual costs of nuclear generated electricity that Japan and Russia are now paying ongoing. And in the future it is inevitable that there will be more nuclear accidents. How many people near nuclear power plants will die next time or lose their family lands forever? or (30, 60 or 90 or even 21,000 years depending upon the half life of whatever nuclear elements that got loose into the atmosphere, land or water or into people's lungs or bodies through breathing or eating?
Posted by intuitivefred888 at 11:01 PM