Making fun of the foreign-policy speech Donald Trump gave yesterday is easy. He said, “'America First' will be the major and overriding theme of my administration,” thus borrowing the slogan of those Americans who opposed America's entry in World War II.
Trump's bizarre plan to put the US first
Donald Trump's foreign policy: 'America first'

It's easy to mock the Republican front-runner. But the “more serious” candidates he toppled don’t make a lot more sense.
Text Size
Making fun of the foreign-policy speech Donald Trump gave yesterday is easy. He said, “‘America First’ will be the major and overriding theme of my administration,” thus borrowing the slogan of those Americans who opposed America’s entry in World War II. Then, three sentences later, he praised America’s victory in World War II. He warned that, “our friends are beginning to think they can’t depend on us” while simultaneously vowing to be “unpredictable” and threatening to pull out of NATO. He called for “a long-term plan to halt the spread and reach of radical Islam” while vowing to destroy ISIS “very, very quickly.”
But in evaluating Trump’s incoherence, it’s worth remembering that the more “serious” Republican foreign policy candidates whom he toppled—men like Marco Rubio, Jeb Bush, and Lindsey Graham—were incoherent too. Trump’s just incoherent in a different way. 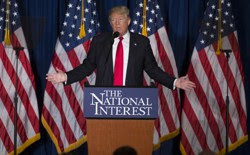 The standard, post-9/11 Republican foreign policy speech—delivered by men like Rubio, Bush, Graham, Mitt Romney, and Paul Ryan—goes something like this:
America is a force for good. But the world contains evil regimes and movements: Iran, North Korea, China, Russia, Syria, Cuba, radical Islam. These evildoers are on the march because America has pulled back from its global commitments. It has pulled back because Barack Obama and Hillary Clinton don’t believe America is a force for good. But when I’m president, America will believe in itself again. We’ll rebuild our military and confront our evil enemies and America will once again win great victories for freedom, as we did under Ronald Reagan.
This may sound more serious than what Trump says, but strategically, it’s absurd. Strategy requires matching ends and means. When establishment Republican candidates describe every American adversary as evil, and propose confronting them all simultaneously, they are outlining ends that America utterly lacks the means to achieve. There’s no way America can simultaneously take a more aggressive stance against Chinese expansion in the South China Sea, Russian intervention in Ukraine, Iranian intervention in Iraq and Syria, Iran and North Korea’s nuclear programs, and ISIS. America can’t do that because its military and economic resources are limited and because effective foreign policy requires tradeoffs. Take a harder line against China in the South China Sea and it may be less cooperative in containing North Korea’s nuclear ambitions. Take a harder line against Russia in Ukraine and it may be less cooperative in containing Iran. Try to roll back the influence of Russia, Iran, and “radical Islam” in Syria and you’ll be fighting against almost everyone there who matters.
Reagan was wiser than his disciples. Contrary to GOP myth, he didn’t try to roll back “communism.” In his first term, he ratcheted up pressure on the Soviet Union while continuing America’s rapprochement with communist China. But this prioritization of threats is wholly absent from the rhetoric of the establishment Republicans who invoke his name.

Reagan was wiser than his disciples.
Trump’s incoherence is different. If the standard Republican battle cry is: “Evil countries and movements are on the march but I’ll defeat them,” Trump’s is “everyone is ripping us off, but I’ll cut a better deal.”
Establishment Republicans assess regimes based on their support for American hegemony. Regimes that support it deserve unstinting support, and are praised as “freedom-loving,” “democratic” or, at least, “moderate.” Regimes that oppose American hegemony deserve unstinting opposition. That’s what conventional Republicans mean by “moral clarity.”
Trump, by contrast, assesses regimes based on whether they’re taking advantage of America. And in his view, they pretty much all are (Israel excepted). Some are taking advantage by building, or trying to build, nuclear weapons (North Korea, Iran), some are taking advantage by sending America their “rapist” immigrants (Mexico), some are taking advantage by stealing American jobs (China), and some are taking advantage by making America pay for their defense (most of Europe). Because Trump focuses as much on economic threats as on military ones, he doesn’t divide the world morally the way standard Republicans do. In his speech, he didn’t utter the words “freedom,” “liberty,” or “tyranny.” (In his big 2011 foreign policy speech at the Citadel, by contrast, Romney used variations of those words 20 times.) Trump’s one reference to a “dictator” came when he scolded the United States for overthrowing one in Libya. The only time he praised “democracy” was when he praised Israel. Every other time he mentioned “democracy,” he chastised American leaders for promoting it in the Middle East.
According to Trump, democracies don’t behave much differently from dictatorships. Governments, regardless of type, are like businesses: They pursue their self-interest. And America’s government has been doing a lousy job of pursuing its own.
Conventional Republicans say they’ll vanquish America’s adversaries by using, or threatening to use, military force. If America arms rebels in Ukraine and Syria, threatens to bomb Iran, intensifies the war against ISIS, and warns China against regional expansion while expanding military deployments in East Asia—America’s enemies will knuckle under.
Trump’s threat is different: Either other countries treat America more fairly, or the United States will take its marbles and go home. If Western Europe and Japan won’t pay more for their own defense, “the U.S. must be prepared to let these countries defend themselves.” If America can’t “make a deal” to cooperate with Russia in the Middle East, “then we will quickly walk from the table.” If China won’t reduce its trade surplus, “we can both go our separate ways.”
The conventional Republican vision is of an America that, by threatening war, can expand its hegemony on all fronts. Trump’s is of an America that, by threatening isolation, can enjoy globalization’s benefits without its costs. Both wildly overestimate American power. Both deny that foreign policy involves painful tradeoffs in a world that America cannot bend to its will.
Posted by intuitivefred888 at 9:40 AM

Email ThisBlogThis!Share to TwitterShare to FacebookShare to Pinterest
Labels: Donald Trump and the GOP Tradition of Foreign-Policy Incoherence